Maker’s Mark and Roku teamed up recently to announce the premiere of “The Show Next Door,” a weekly talk show where Randall Park sits down with actors, athletes, and musicians for interesting conversation, fun games and more.

Makers of the show say the show embodies what they feel is the fun, upbeat and relatable feeling of having a quick drink with friends. Viewers can stream the six-episode series on The Roku Channel.

“’The Show Next Door’ is the embodiment what we call Maker’s Hour – the much-deserved time you decide to make for yourself,” said KK Hall, Global Senior Marketing Director for Maker’s Mark, in a prepared statement. “We turned to the Roku Brand Studio because we want to go beyond the traditional ad experience on the largest screen in the home. Together we developed an entertaining and clever show with a splash of spirit as audiences transition from “working at home” to “being at home.” 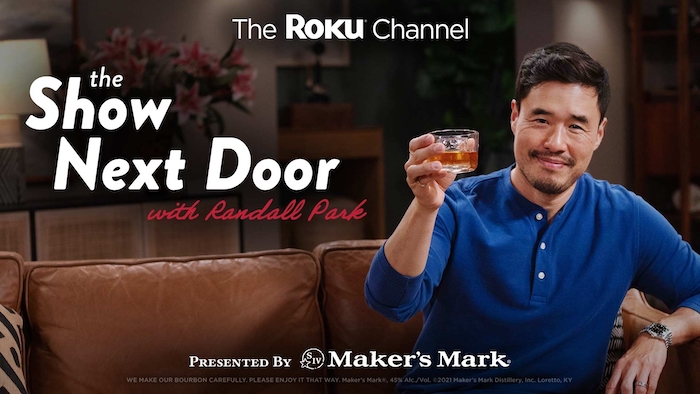 “The Show Next Door,” is a new weekly talk show where Randall Park sits down with actors, athletes, and musicians for interesting conversation, fun games, and more than a few laughs. (image via Roku)

Each episode of “The Show Next Door” takes place in Randall’s living room and begins with him crafting a favorite cocktail during his opening monologue. Season one guests include Tony Hale, Terrell Owens, Fortune Feimster, Jason Mraz, Mark Duplass and Gina Yashere.

“I always wondered what it would be like to host a talk show, and now I know – it’s super fun,” said Park.” “I had a great time building this show with Roku and Maker’s Mark, and I’m excited it’s now available for everyone to enjoy!”

“Our partnership with Maker’s Mark is innovating how brands meet consumers today as they shift away from traditional television to streaming,” said Brian Toombs, Head of Content at Roku Brand Studio. “’The Show Next Door’ is an incredible example of moving beyond the traditional 30-second ad and creating a fun and uplifting comedy so Maker’s Mark reaches streamers whether they are watching ad-supported or subscription-only content.

“The Show Next Door” will be available to stream for free on The Roku Channel and across Maker’s Mark social channels.