The saga of Jefferson’s Journey as a bourbon traveling by boat has been a long one, to say the least. We first chronicled it back in August 2016, during which time Jefferson’s Bourbon founder Trey Zoeller had already loaded two barrels of his bourbon onto a boat for them to make what ultimately was an epic trip. The fruits of his labor are now available in retail.

Jefferson’s Journey began when Zoeller last June put the whiskey on a 23-foot Sea Pro boat which ran the barrels from Louisville, Kentucky to New Orleans. After stopping in New Orleans in August the bourbon was, according to those behind it, loaded onto a rum runner boat and made its way down the Florida coastline, stopping in ports such as St. Petersburg and Tampa in late August, where it experienced a weather scare from Hurricane Hermine, causing extensive damage to one of the barrels. 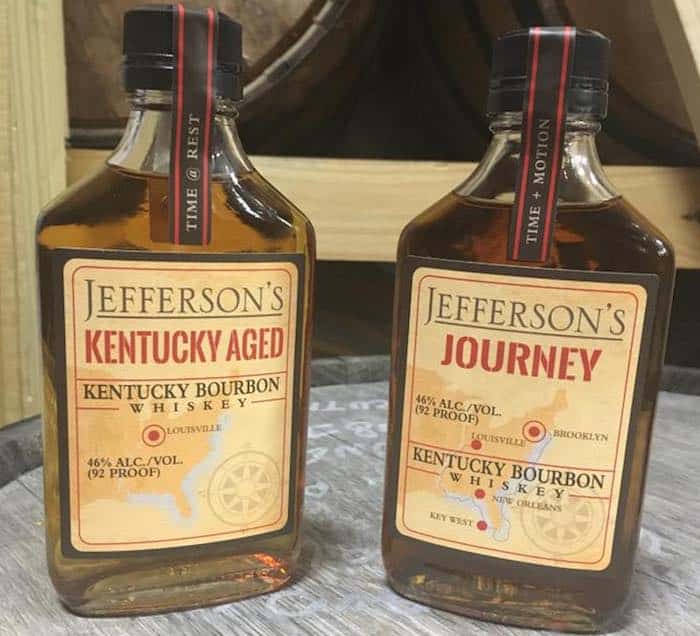 From there, the bourbon traveled to Ft. Lauderdale, encountering yet another massive storm, Hurricane Matthew, at the end of September, which caused further damage and wear to both the barrels and the boat. After extensive repairs and rerouting, the barrels were loaded onto another 27-foot ship headed north up the Atlantic, finally arriving in New York City on June 6th, 2017, exactly one year after the launch of the journey.

As to why this long, long journey was undertaken, its purpose was to gauge the different ways in which bourbon matures on water, as opposed to in barrels on dry land, and to figure out how transportation means of the past affected the taste and finishing of early bourbon production. Since the beginning of whiskey production in the United States, noted Jefferson’s, buyers and sellers in cities up and down the East Coast clamored over barrels coming from Kentucky, west of the Appalachian Mountains. Zoeller theorizes that this is due largely in part to the transportation method: floating on water.

“My personal theory is that as the bourbon constantly sloshed around in the barrels, the constant contact with the wood accelerated the maturation process,” said Zoeller in a prepared statement. “The barrels also sucked in the salt air and the sun caramelized the sugars in the wood and sped up the maturation process, producing a much different final product than we know today. It’s a bourbon that, in my mind, tastes much more similar to our Jefferson’s Ocean product than bourbon that is now aged in Kentucky – that’s what made Kentucky bourbon so desirable and unique a hundred and fifty years ago and why buyers in cities like New York, Philadelphia and Boston demanded the bourbon from Kentucky and were willing to pay more for it.”

Plans now call for 1,000 samples of Jefferson’s Journey to be released in 150ml bottles. The product will be priced around $100 and each product will also include a 150ml bourbon aged in stationary barrels to demonstrate the difference in flavor and maturity between the two aging processes.