Editor’s Note: A portion of the time element in this story has been updated to reflect the current location of the bourbon since this piece was first submitted to us for publication.

When a big chunk of your living is buying old bourbon and rye, it’s a challenge to not become a liquor history buff. Add in a father who’s a noted bourbon historian, and it’s near impossible to escape that hobby.

But when your passion for knowledge drives you to affix a pair of newly filled bourbon barrels to the stern of a 23-foot boat and set out to recreate how bourbon was transported from Kentucky to New York—just to see how that affects the liquid’s flavor and color—onlookers may think you’re crazy.

But Trey Zoeller isn’t crazy; he’s committed to finding out what made Americans in the Northeast so willing to pay high prices for Kentucky whiskey in the early 1800s. And as owner of Jefferson’s Bourbon, he’s mission-minded enough to do it.

“My theory—and others think this, too—is the trip down the Ohio, down the Mississippi, around Florida and up the East Coast did wonderful things to the bourbon we made here,” said Zoeller, son of historian Chet Zoeller, who co-founded Jefferson’s with him. “All that movement and jostling from being on the water, all that exposure to heat during the day and cool at night, even exposure to the salt air on the ocean … I want to know what that tasted like.” 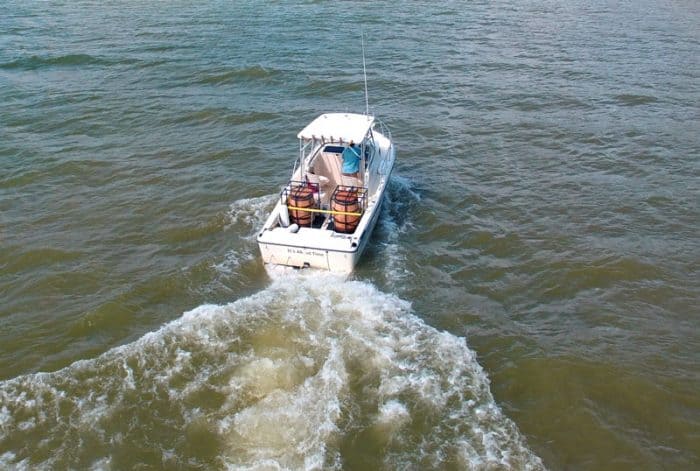 To reenact this historic liquor run, Zoeller first had to get the TTB’s blessing. Then he contracted Ted Gray to pilot the boat from Louisville to New Orleans—largely without power.

“To be as authentic a trip as possible, we want to go at the water’s speed, not by power, so that’s between 3 and 4 knots, which is pretty slow,” Zoeller said. But since the route from the Ohio River down through a series of Kentucky, Tennessee, Mississippi and Alabama rivers includes passages through multiple locks, the Coast Guard insisted on a powered craft. “To do what we’re doing out on the Mississippi River would be the most authentic route, but it’s just too dangerous without power. … Captain Ted is a patient, patient man to do this using power only to steer.”

The Sea Pro craft’s captain’s chair is shaded and contains only a small forward cabin where Gray can retreat from the sun or a storm. About midway through the trip in July, summer temps soared past the century mark for days on end, and on some afternoons, thunderstorms made traveling rough. Each night Gray has docked the boat and slept onshore, sometimes with friends, other times at hotels. After leaving Louisville on June 7, he arrived on Lake Ponchartrain near New Orleans, Louisiana this past weekend.

Zoeller, having met up with Gray in New Orleans, was set to be in attendance last night, according to WGNO, at a dinner and Jefferson’s tasting for 70 people hosted by famed chef John Besh.  Next up the bourbon, which was distilled and barreled in January at Kentucky Artisan Distillery in Crestwood, Kentucky, will travel across the Gulf of Mexico to Key West aboard Besh’s boat, a historic, restored rum runner. Following a Key West landing party for the whiskey and Zoeller, a sailboat will be hired to take it to New York City for a final landing party.

Zoeller said at that point, the whiskey will be tasted, but only in small amounts. To satisfy TTB regulations, it must be bottled.

When interviewed in June, Zoeller said the whiskey would never be sold. Rather, any bottlings would be auctioned off for charity. Yet after seeing the interest bourbon lovers have for the project and the final results, he’s considering bottling some of it in 200ml parcels.

“Of course, we want to see how it turns out first,” he said, smiling confidently that the result will be good.

This isn’t the first water craft experiment for Jefferson’s. The brand’s well known Ocean releases were carried in the cargo hold of freighters that, en route to as many as 30 ports, crossed the equator four times and touched five continents.

“But this will be different,” Zoeller insists, “because these barrels are exposed to all the elements; right out there in the open.”

The barrels are held in a sturdy metal cage to ensure they don’t roll and aren’t stolen (another concern for the TTB). Other than that, their oak skins are enduring a significant weather beating, just like in the old days atop flat riverboats.

“They’re really sweating and that’s how it used to be done, and that’s the way we want to do it—as closely as possible,” Zoeller said. “I can’t wait to taste it, to see how the salt air affects it, to see how a riverboat ride affects the flavor.”

He also wants to demonstrate another Kentucky-proud fact: That its early distillers had an incredible advantage over others because of the Commonwealth’s abundant waterways.

“My dad has always believed that our river system allowed distillers to get bourbon to market faster than others could,” Zoeller said.

Reality supports his theory, as there are more navigable waterways in Kentucky’s western half than any comparable landlocked area in the world. And that area isn’t even linked to key waterways such as the Kentucky River, which served dozens of historic distilleries via quick access to the Ohio.

“Makes sense, doesn’t it?” Zoeller said. “There’s so much to the story of Kentucky bourbon that I’m interested in.”