James T. Kirk Bourbon Aims To Beam Itself Into Your Liquor Cabinet

Editor’s Note: This article has been updated after clarification from the party behind this whiskey about its origins and age (see below for details).

Ok, I’ll be the first to admit this is a shameless tie-in between whiskey and an entertainment property. And, somehow, since I’m a huge Star Trek nerd that’s ok. Under license by CBS Consumer Products, Silver Screen Bottling Company has just announced it will launch a Star Trek branded spirits line. The first spirit, James T. Kirk Straight Bourbon Whiskey, is coming to market for those looking for something besides Romulan ale to consume while watching their favorite Trek episodes.

James T. Kirk Straight Bourbon Whiskey, according to those behind it, is 10 year old whiskey that’s been distilled in Tennessee and bottled in Kentucky.  , Each small batch release that’s planned for it is said to celebrate “Captain James T. Kirk’s bold spirit of adventure.” The bottle design was influenced by Star Trek “behind the scenes” veteran, graphic designer, Mike Okuda. 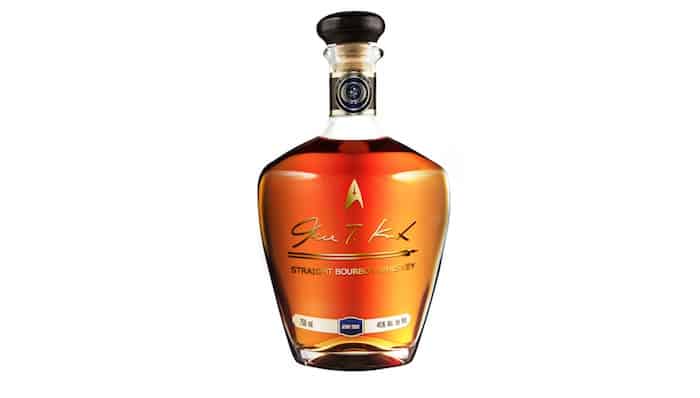 Plans call for the Kirk bourbon to be a limited release product, though how limited exactly was not said. It will price around $60 for presale and there are a few places online you can reserve a bottle from.

James T. Kirk Straight Bourbon Whiskey will be featured at San Diego Comic-Con, July 19-22, 2018 in San Diego, CA, with additional spirits set to make their debut. Very limited official tasting notes suggest “a depth and richness seen in only the finest examples of bourbon with notes of caramel, Asian 5 spice and pecan.”

Read More Whiskey News
How Many Shots Are There In a Bottle of Whiskey?

As a side bar, it is interesting to see bourbon chosen as the whiskey style for Kirk given his occasional fondness for Scotch.