James E. Pepper Distilling Co. recently announced it was breaking ground on a new Kentucky whiskey aging warehouse in that state’s Woodford County, a noteworthy expansion given the revival of its historic distillery after a 50-year hiatus.

The new warehouse will be a whopping 17,800-square-foot. Whiskeys distilled at the Lexington facility are currently aging in third-party warehouses and are expected to reach the market beginning in 2022. The distillery’s current lineup includes 1776 straight bourbon, 1776 straight rye, Old Pepper single barrel and small batch Henry Clay straight rye whiskies.

“I’m thrilled to join James E. Pepper Distilling Co. today to break ground on the company’s first warehouse since the brand was reestablished in Central Kentucky,” said Kentucky Gov. Andy Beshear, who was on site during the ground breaking, in a prepared statement. “This project will help move the company forward and contributes to our thriving bourbon and spirits industry, which has seen significant growth in recent years. This is the start of something special for this company, and it is great to see a well-known brand return to Kentucky.” 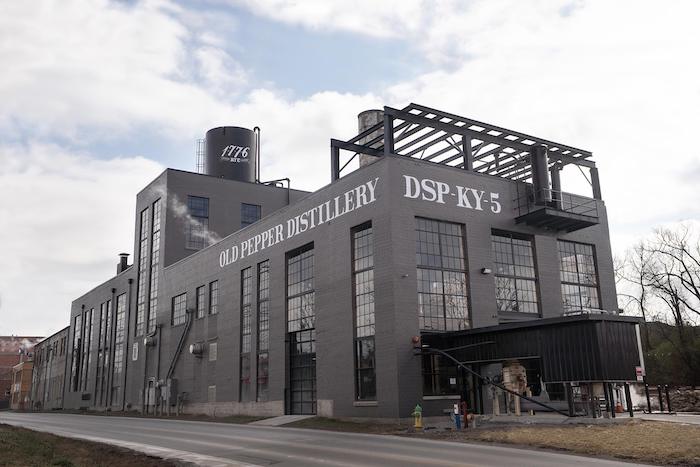 The Pepper family brand of whiskey dates back to 1780, with two distilleries maintained in the commonwealth until 1967, including the Versailles site now occupied by Woodford Reserve. The company ceased operation in the 1960s. In 2008, owner Amir Peay relaunched the brand and in 2017 rebuilt the historic distillery in Lexington’s Distillery District. The Fayette County facility resumed distilling with the same recipe used at the time the original company.

“Woodford County is the bourbon capital of the world, and we give our heartiest welcome to another world-class bourbon distiller in James E. Pepper Distilling Co.,” Judge/Executive Kay said. “No place compares to Woodford County’s support for the jobs and opportunity created by the best crafted bourbon, and we are proud to welcome and support James E. Pepper and its wonderful family of employees to our community.”

In Kentucky, roughly 70 spirits facilities employ more than 5,100 people throughout the commonwealth. In 2021 alone, Kentucky’s spirits industry has seen 12 new-location or expansion announcements with over $270 million in planned investments and 267 announced full-time jobs.