The Garrison Brothers Distillery is one of a handful of Texas-based distilleries making some rather fascinating whiskey at the moment. We’ve covered some of their previous releases, including some special 375 ml, flask style bottlings that came out last year. Now word is out of the 2018 release of their flagship small batch bourbon.

The new Garrison Brothers Small Batch Bourbon (2018 Vintage), according to those behind it, was drawn from 498 barrels that were dumped to create this release. Each of these barrels contained bourbon said to be at least four years or older, and the larger number of casks available makes this the distillery’s largest release to date at over 60,000 750 ml bottles. 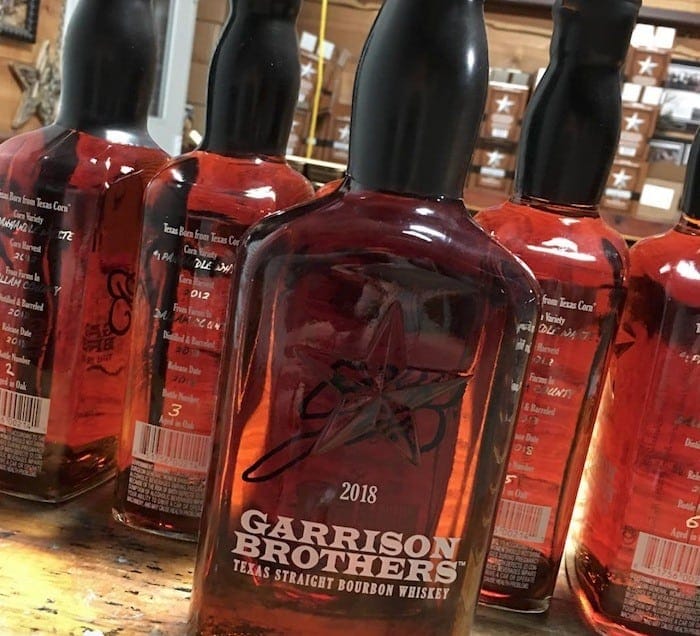 One of the things which is particularly interesting about this release is seeing how the Texas heat played a significant role in keeping the consistency of the cask strength from time of initial barreling until it was time to pull it out. In a climate where reportedly as much as 40% of the liquid can be lost to the so-called angel’s share, the white dog which initially entered the barrels in 2013 was, on average, at 114 proof. Four years later, it is said the average cask strength was 115.7 proof.

Put another way of what the heat is like in Texas, here’s an example distillery founder Dan Garrison noted recently around how a very famous Texas barbecue restaurant ended up with some rather one off BBQ sauce which had spent some time aging in ex-Garrison whiskey barrels:

Unbeknownst to us, Scott Roberts at The Salt Lick bought a few dozen USED bourbon barrels from us and filled them with his company’s barbecue sauce. Keep in mind that these barrels had already been filled with bourbon and were then drained. Scott’s barbecue sauce got hot inside the barrel and expanded, forcing its way into the crevices in the wood. When the sauce cooled, it shrank and came back out of the wood taking along with it the trace amounts of bourbon that had been lost to the wood. The resulting barbecue sauce was delicious AND was 10% alcohol by volume.