Death And Destruction: The Risks Of Whiskey Making

What are the risks in making whiskey and grain spirits? I recently investigated over three hundred catastrophes at grain distilleries during the past two hundred and forty years to see if and why whiskey distilling can sometimes be a dangerous business.

The catastrophic beginning of the trail of death and destruction starts at a grain distillery in London, June 1780, when the nascent whiskey industry burgeoned into commercial life. The cause of the devastation was the most unusual incident of distillery calamities, instigated when an anti-papist mob of several hundred people demanded Roman Catholic Thomas Langdale surrender to them his popular gin and flavored spirits as they marched on the City.

The mob turned into a riot after they broke into his Holbein still room and found a way to pump malt spirit onto the street to the gathering crowd. Unrectified low wines ran through the gutters, where some of the mob lay on their stomachs, gulping the noxious liquor. The drunken melee set fire to over 120,000 gallons of spirit, destroying the distillery, his home and neighboring buildings along the street. By the time the Northumberland militia arrived to shoot and bayonet stragglers, many had already perished in the fire or died of alcohol poisoning.

Only a few disasters involved drunken crowds or individuals. In one gonzo case in March 1841, an intoxicated worker at the George Haines Kentucky distillery knocked over a stove and set his clothes alight. Stumbling about the room in an inebriated stupor, he spread the fire about the room, burning the distillery to the ground. In August 1875, thirteen drunken people died of alcohol poisoning on a Dublin street when the Malones bond store caught fire. Thousands of gallons of whiskey flowed down the street gutters, luring some of the locals to gorge themselves into a deadly stupor. 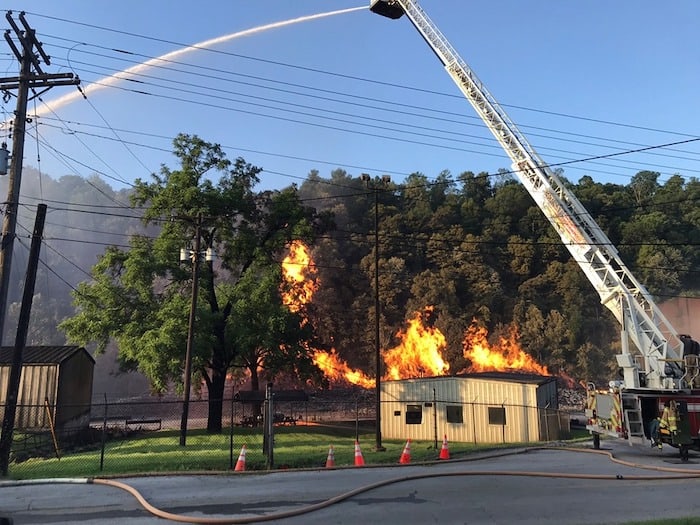 A burning Beam warehouse in July, 2013 (image via Kentucky Energy and Environment Cabinet)

The deadliest distillery disaster was in western Russia when the Communists announced a liquor prohibition in October 1917. News the nation was about to go dry caused a riot with soldiers and peasants pillaging a grain distillery and setting it on fire in a drunken rage. Between the conflagration, gunfire and deadly inebriation, one hundred and fifty people perished.

The greatest fear that haunted distillery owners and workers were fires. It was the leading cause of death and destruction since 1780. Fire fatalities were not the only causes heralding the Grim Reaper’s arrival; other death traps awaited the unwary, unlucky and incompetent distillery worker. Today, modern distilleries are conscious of the operational risks and must meet stringent compliance regulations to prevent injury, damage or financial loss.

Only a few major incidents have impacted the whiskey industry’s safety record during the past twenty years. While there have been three dozen explosions and fires at new micro-distilleries across four countries, remarkably, only one casualty occurred at Kentucky’s Silver Springs Distillery in April 2015 (as well as a death by a forklift truck at an Irish warehouse in 2018). This admirable record of occupational safety is due to different jurisdictions enforcing rigorous health and safety standards based on past causations and pre-emptive planning.

Without proper vigilance, whiskey distilling remains a dangerous business, as the past two hundred and forty years will highlight.

The greatest perils were explosions and fire. Explosions posed multiple threats, with the blast zone killing and maiming workers, then the spreading fire. After fire-related calamities, the next greatest killer was by drowning or scalding by boiling liquids. Staff working on wooden planks laid across cookers, washbacks and storage vats frequently fell to their doom. Drownings could also occur when massive vats ruptured, flooding storage rooms and neighbouring premises.

A collapsing washback of hot whiskey at Loch Katrine’s Glasgow distillery in 1906 resulted in a wave of over 200,000 gallons crashing into streets and adjoining properties, killing one person and injuring fourteen more. If the liquid inside a vat was not the hazard, lurking inside some empty vats was yeast’s silent killer, carbon dioxide. CO2 is a deadly and invisible gas causing rapid asphyxiation. At the Worcester distillery in 1856, after one of the workers succumbed to CO2 suffocation, each rescuer descended into the vat suffered a similar fate when overcome by fumes resulting in five casualties. 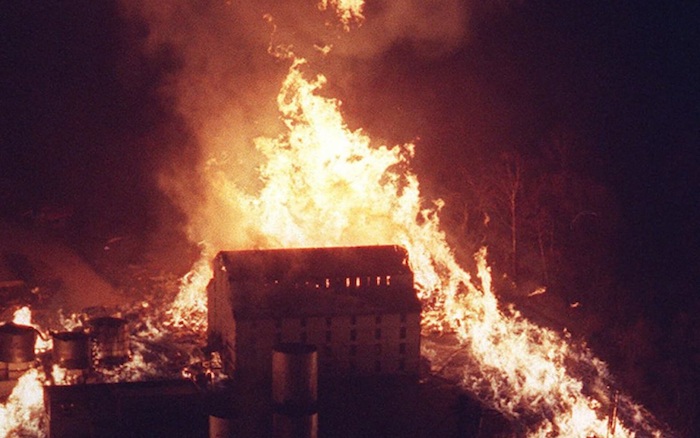 The Heaven HIll fire of 1996 (image via Heaven Hill)

Distilleries that lacked ventilation were at risk from ethanol vapors, the other gas killer. The heavy, unseen, and highly flammable gas seeps out during distillation and cask storage, where a wayward spark or gas lamp flame could detonate a cataclysmal blast.

Plentiful water is essential for a distillery, and it can also pose a threat. Flooding rivers and storm damage have inundated over a dozen distilleries causing severe losses and structural damage. Glen’s Main distillery was destroyed near Linlithgow in December 1825 when the Union Canal broke its banks. The large Cameronbridge continuous patent distillery at Alloa was damaged by floods in February 1903, as was Strathmill at Keith in September 1924. In Cincinnati, the Duckworth distillery subsided into Mill Creek in February 1884 when floodwaters washed away its footings.

By studying grain distillery catastrophes, calamities chart the international history and expanding scale of the whiskey industry over time. The rise of national production cycles and their total output affects the size and frequency of disasters. The US incurred 55% of catastrophes, Scotland 30%, England 10% (mostly London gin & malt spirit), Ireland 6% and the rest of the world 9%. The larger number of distilleries of greater size and capacities increased the frequency and amplified the disaster’s magnitude. 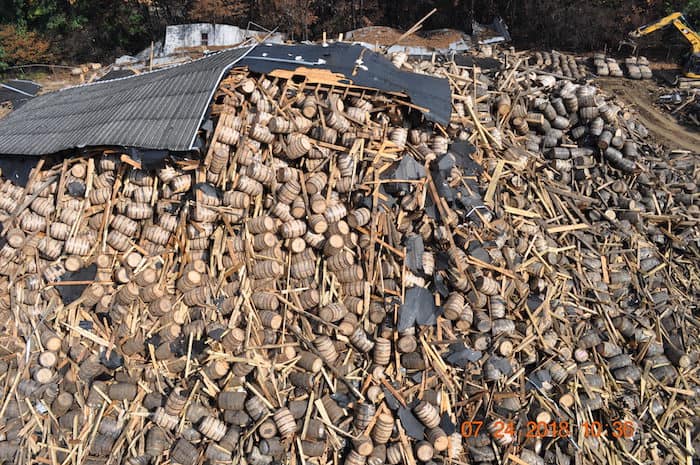 As the plant increased in size, they became more mechanized, so hazards escalated in production and bond storage. Their prodigious spirit outputs meant increased fire risk due to larger warehouse inventories of maturing, flammable stock. From the 1880s, larger-scale losses were frequently incurred, such as when the world’s largest distillery, the Monarch distillery in Peoria, caught fire in January 1890; a decade later, the neighboring Corning distillery suffered three fires, one costing over $1 million, or $27 million today. Pennsylvania’s Overholt distillery recorded $4 million in fire damages in November 1905 or $117 million in today’s value. Kentucky’s Midway distillery was subjected to an arsonist attack costing $2.8 million in August 1908. Other distilleries were also subjected to similar eye-watering insurance claims or shareholder losses.

Grain distilleries were powder kegs. It was not only the production of high proof distillate and casks of stored whiskey that represented a flammable risk; buildings, mechanization and new manufacturing processes made distilleries dangerous places. At the beginning of the whiskey-making process, a fire was the ever-present threat with grain milling. Ground grain meal releases volumes of highly combustible dust, where a tiny spark can trigger an explosion.

A massive explosion levelled several blocks in Minneapolis when a grinding stone spark destroyed the world’s largest milling complex; the Washburn incident occurred in May 1878, with the explosion and expanding fireball killing eighteen workers. Until the incandescent electric lightbulb, interior rooms, work areas and offices gained illumination by candlelight, oil and spirit lamps and later gaslight. All these flammable sources posed risks and were responsible for numerous distillery fires, along with stoves for heating workers and nightwatchman in winter.

Until the invention in the 1960s of non-sparking electrical circuits and lights (RCD), fusing or arcing could also set off explosions and fires. Furnaces were another incineration source caused by burning wood, peat, and coal for malting kilns, boiler buildings and cooperages. Errant embers and soot from chimneys were an ever-present threat from furnaces and direct-fired stills, responsible for setting distilleries aflame.

In the late 19th century, American distilleries faced a new menace, arson attacks from competitors, enemies, and prohibitionists using incendiary devices to eliminate the businesses. Arsonists came in many guises. Cherokee Indians burnt down Frederick Stump’s distillery near Nashville in December 1792, while extreme intimidation tactics by the Whiskey Trust saw the Schufeldt distillery in Peoria, Illinois, dynamited in December 1886. Further arson attempts were made on other distilleries in Peoria. German bombers hit the Greenock distillery in Glasgow in May 1941; four months later, the Luftwaffe struck the Banff distillery.

As distilling became increasingly industrialized, with more massive scales of production, boilers and still explosions became more frequent and devastating. Pressure ruptures and valve failures caused by overheating or poor engineering resulted in injury and fatalities by shrapnel, blast concussion, liquid scalding or scorching by fire. In March 1814, the Lochrin distillery’s boiler in Glasgow exploded, killing two attendants. From the 1870s, Peoria had the world’s largest distilleries resulting in more devastating explosions. The Corning distillery saw four deaths by cooker explosion in October 1903, and another fourteen killed by blast and fire in June 1904.

Bolts from heaven and machinery

Mother nature also stalked distilleries with unwelcome storms, regularly delivering lightning strikes hitting distilleries and warehouses. This was a more significant problem for America’s Midwest, ‘the big weatherzone’ where lightning and the occasional tornado struck devastating blows at the Old Copper Fire distillery in June 1882 and the Globe distillery in Perkin, Illinois, August 1913.

When distilleries began constructing large metal barrel houses, they often situated them on deforested hills proving vulnerable to lightning caused conflagrations. In recent decades lightning strikes in Kentucky made world headlines with pyrotechnic displays at Heaven Hill’s distillery in November 1996 and Wild Turkey in May 2000. The Beam distillery was struck in August 2003 and again in July 2019, incinerating a million gallons of bourbon and killing thousands of fish along 24 miles of the Kentucky River. 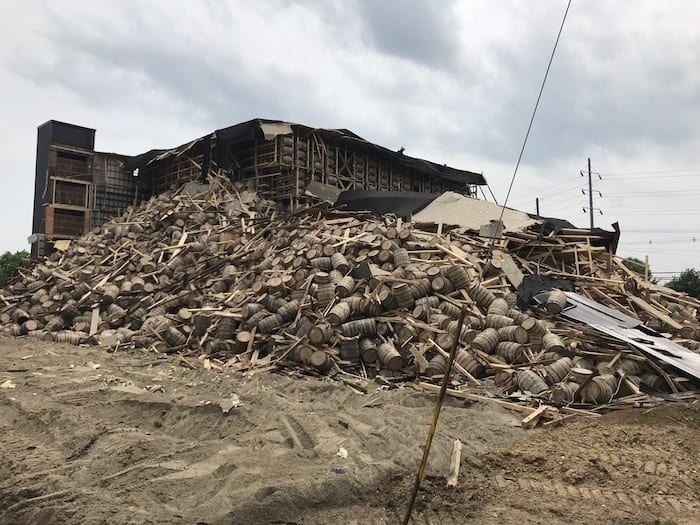 Barrels and debris from a partially collapsed O.Z. Tyler warehouse in 2019 (image via O.Z. Tyler)

Workers who avoided fires, explosions, suffocation, and drowning were also at risk of being crushed by the large machinery as distilleries industrialized and automated manual activities. A tunroom operator at Longmorn distillery at Elgin in April 1902 became entangled in the belt and pulley working the wort pump dragging him to his death in the machinery. The constant movement of vehicular traffic, rail shuntings, grain mills, mechanical stirrers, pumps, and manual movement of heavy-laden casks were familiar causes of injury and tragedy.

Distilling whiskey is no longer one of the most dangerous jobs. Today’s safety standards mean disasters can be avoided, prevented or mitigated in the event of an accident or equipment failure. Everything from modern fire suppression systems, bunding barriers, certified equipment and parts, protective clothing and chemical baths to HAZOP procedures, manuals and training ensure a safer working environment for making whiskey.

The recent boom in the whiskey industry is witnessing massive investments by established distilleries to increase their capacities and storage facilities, elevating commensurate risks.  Add the international proliferation of over 2,500 micro-whiskey distilleries in four dozen countries, with thousands of varying jurisdictions and compliance standards, mean accidents and negligence requires daily vigilance to prevent the spectre of death and destruction striking the unwary distillery worker.

141
Shares
791
Views
Share on FacebookShare on TwitterGet Our Newsletter
Get Jefferson's Ocean at ReserveBar. Shop now!