Seriously, bourbon, and everything connected to it: the industry behind it; and the hard and friendly conversations drinking it can elicit.

Truth be known, the Ph.D. and associate professor of African American studies at Kentucky State University in Frankfort is a tequila fan hoping to come onto bourbon. (FWIW, she prefers Casamigos and Don Julio 1942.) But for now, what interests her most about America’s native spirit is uncovering hidden stories about the roles black slaves and employees served in making it over the industry’s two-century history.

Uncovering and understanding those, she said, will heighten the awareness of all bourbon drinkers as to how this cherished spirit came to be, and provide African Americans a new appreciation for their connection to the industry.

“African-Americans were doing the work for a long time, but stories about the work they did were swept under the rug,” Wiggins Gilliam said. Most photo archives maintained by distilleries and historians in general are lean on images of black workers, she added. “But about 1960 or so, you see pictures of black women who were secretaries, and black men opening doors for white people.

“That was just a reflection of society as it was then, but I want to go further back than that.”

Her research began when asked to speak at the 2019 Bourbon On the Banks festival last summer in Frankfort. Her studies of African Americans in general had never been so serendipitously narrowed to the very state in which she lived and an industry which, by some standards, is quite small.

“Anywhere I can shine a light on black contributions to America excites me,” she said. “But the bourbon industry was something I’d never considered. I thought, ‘This is cool. I want to do this.’” 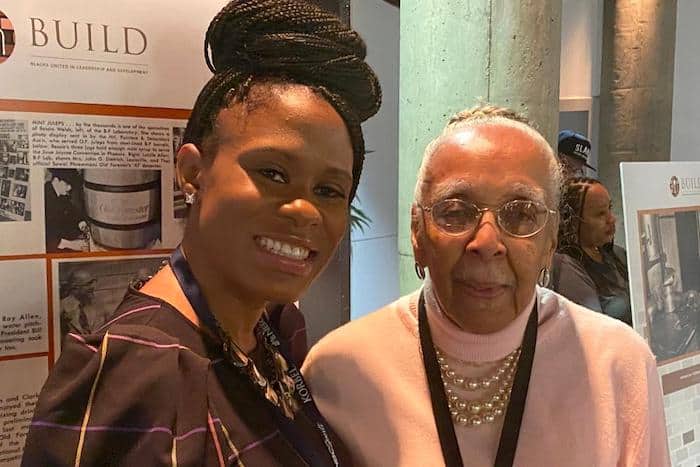 In the 10 months since she began, her explorations have yielded a mix of celebration and mild frustration. She was thrilled to meet Elmer Lucille Allen, who, in 1966, became Brown-Forman’s first African American woman chemist. Allen served in that role for 31 years before retiring in 1997 to become a noted ceramic and fiber artist.

But the work of one particular enslaved distillery hand holds much more mystery and intrigue. A fellow historian told her about how Kentucky slaveholder Stephen Chastain leased out the unnamed slave’s services to a Kentucky distillery for $114 a day—a sum surpassing the going rate of the period for white day laborers. Such high wages for a mere slave’s services led Wiggins Gilliam to assume the man wasn’t an ordinary talent.

“If it’s more expensive to rent this black man to work in your distillery, it gives you this idea that if you’re paying $114, he’s doing more than just cleaning the stills,” she told Forbes.com in a June 2020 interview. “He’s probably key to the distillation process.”

The story of Nearest Green, the slave who taught Jack Daniel how to make whiskey, surely isn’t the only slave to become a skilled distiller, she said. Making whiskey on 19th century farmstead operations was not only common, but toilsome work delegated to slaves where possible. Those possessing such experience likely were in demand as large-scale distilling evolved quickly in the late 1800s.

“The research shows that many were probably distillers—maybe the best out there, and even coming up with (whiskey) recipes,” she said. “But nobody really talked about them.”

Wiggins Gilliam said such a lack of information about black peoples’ roles in distilling history is one more case of how her race’s accomplishments have been marginalized over the centuries. To find and expand on those stories, she added, will require full transparency from distilleries.

“Many companies are showing a willingness to help, especially in the light of racial tensions today,” she said. “But I want to make sure the conversations that come from it aren’t just surface level discussions. Those conversations need to be about race and lead to the dismantling of systemic racism.

“And I think those conversations can happen around a bottle of bourbon.”

Though disappointed about the dearth of information about black distillery workers, Wiggins Gilliam isn’t surprised or deterred. She expects to lean heavily on oral history to fill in the blanks and, hopefully, lead to more definitive artifacts that prove their hidden and profound impacts.

“I haven’t found as much as I’d like, and that’s the part that—as a historian—that hurts the most, but also drives me to keep looking for them,” she said. “So while I keep going through (distillery) archives, I’m also sitting and having conversations and making sure that oral history stays alive.

“The historian in me wants to say, ‘There’s still a chance something’s out there, a bit of something somewhere that’s going to give that glimmer of hope—that one picture that one piece of paper or photograph … or that one story from a 90-year-old grandmother or grandfather that tells me I’m going in the right direction.’”

Bourbon, she repeated can and should play a key role in unearthing these stories.

“Bourbon is an avenue we can go down to talk about race,” she said. “When everyone is ready to talk about African American contributions historically and we can see their value and know it’s there, people will talk. Hard conversations are made better with good food and good drinks.”