Jim Beam must surely be somewhere on high and smiling as the American whiskey empire named in part after him continues to punch out bourbon to a brown spirits happy world. While no one really knows if, or when, the bourbon bubble might burst, for now its full steam ahead at this Kentucky distillery via word of its 15 millionth barrel of bourbon since the end of Prohibition being filled.

The 15th million barrel filled, according to Beam-Suntory officials, comes less than two years since the 14th million barrel was filled and laid down in a Beam rackhouse for aging. It is said this is the shortest period of time between milestone barrel fills, and that this barrel will join the nearly 2.3 million barrels of bourbon currently aging in Jim Beam’s rackhouses across the Commonwealth. It will be stored inside the distillery’s historic rackhouse D, a nine-story warehouse rebuilt by Jim Beam after Prohibition on the distillery grounds. 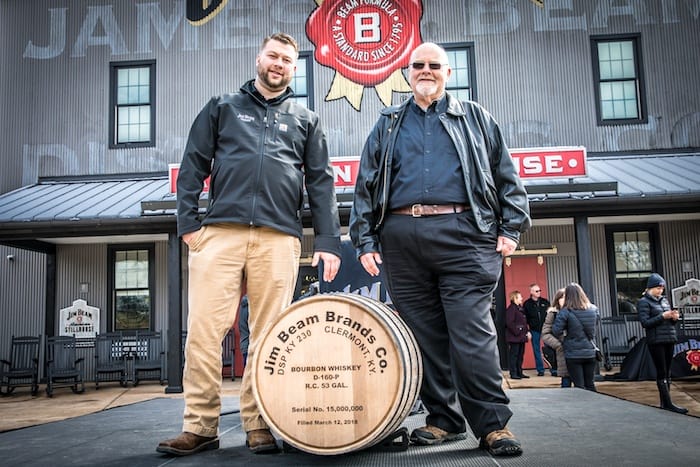 Jim Beam fills its 15 millionth barrel of bourbon since the end of Prohibition. It was filled by Master Distiller Fred Noe and his son Freddie Noe, Eighth Generation Beam Distiller, at the brand’s flagship distillery in Clermont, Ky. (image via Beam Suntory)

“Fifteen million is a big number, but we’re a big bourbon,” said Beam master distiller Fred Noe, who was on hand with son and eighth generation Beam Freddie Noe to fill and seal this barrel. “When Jim Beam, my great grandfather, filled his first barrel of whiskey at our Clermont distillery after Prohibition, I doubt he would have predicted that one day we would be a brand known and enjoyed the world over.”

Read More Whiskey News
It's Bourbon Night: 12 Bourbons You Need To Have on Your Bar Cart

There’s no word on what ultimately will become of the bourbon in this barrel, be it offered up as a single barrel expression or one that’s used in a small batch offering. For now, at least, the rackhouse it rests in allows visitors to see it as part of an on-site distillery tour.