The Jim Beam bourbon brand, noted for being the world’s number 1 bourbon, didn’t get to its position overnight. It has been, rather, a centuries in the making progression, starting with the first barrel of bourbon being filled by Jacob Beam way back in 1795. Fast forward to today, and it has just been announced the 14 millionth barrel has been filled and sealed for aging.

The Jim Beam 14 millionth bourbon barrel, according to parent company Beam Suntory, is even more remarkable when you consider the fact this milestone was achieved just two years after the filling of Jim Beam’s 13 millionth barrel. It serves as “a testament to the continued global bourbon boom,” and is a big piece of the $3 billion Kentucky industry which is this American whiskey type. 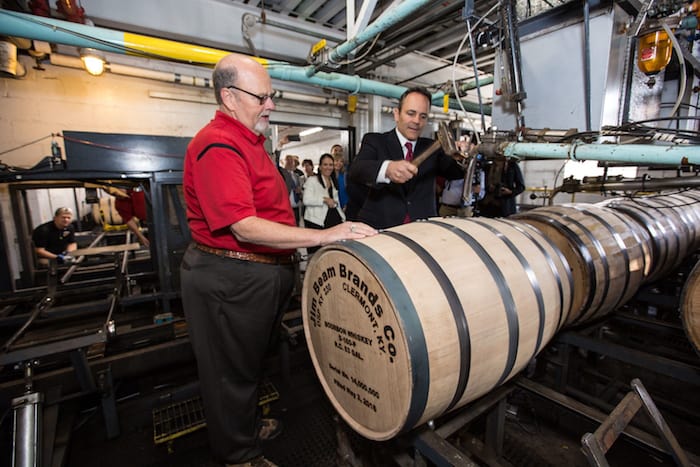 In a ceremonial filling seventh generation master distiller Fred Noe and Kentucky Governor Matt Bevin put into the barrel fresh Jim Beam whiskey. They then sealed it up before it was set to be moved to the distillery’s historic rackhouse D, a nine-story warehouse re-built by Jim Beam after Prohibition on the Clermont distillery grounds. It joins some nearly two million other barrels of bourbon aging in Beam rackhouses across the state.

“When Jacob Beam, Jim Beam’s great, great grandfather, filled his first barrel of bourbon in 1795, he had no real idea of what he was starting,” said Noe – who has been on hand for the previous “six million barrel” milestones, starting at the filling of the 8 millionth barrel in 1998 – in a statement.”All he wanted to do was make the best bourbon possible. The growth of this company reflects that dedication. For more than 220 years, we’ve made every barrel count.”

History is what you make it and, here at Jim Beam, we’re proud to make it one barrel at a time. This milestone is cause for celebration both for our employees and bourbon fans around the globe. Fourteen million is a big number, and it says a lot about the success of our whiskey and the growing passion for bourbon around the world.”

The company, seeing continued future growth opportunities in bourbon, plans to invest more than $1 billion in related functions in Kentucky over the next five years.

“Kentucky bourbon has become not only an American icon, but an international symbol of our proud heritage and craftsmanship,” added Governor Bevin. “I’m pleased to toast Jim Beam’s impressive milestone, rich history and spirited future.”