When you see “Monongahela” on a bottle of rye whiskey, it should bring to mind more than just the river that flows through Pittsburgh on its way to becoming the Ohio River.

For a handful of distillers in the area, Monongahela represents the recent rekindling of a centuries-old whiskey tradition going back – for the modern Wigle Whiskey – to 1794, when western Pennsylvanian distillers like Philip Wigle violently declined to pay the nation’s first federal excise tax under the U.S. Constitution in the Whiskey Rebellion.

While there’s far too much history to delve into here, the area around Pittsburgh was famous for its Monongahela Rye for decades before and after that rebellion, but that tradition largely died out at the outset of Prohibition and remained mostly dormant for nearly a century.

Paying homage and giving new life to that history, Wigle Whiskey has developed a number of Monongahela Ryes, including its “most assertively rye-forward” Deep Cut.

This organic rye uses local heirloom rye grains and distills them in a traditional, copper alembic still. The spirit is aged for 18 months then bottled at cask strength. The name “Deep Cut” refers to the “bold cuts” taken during the process to make it an especially spicy rye flavor. 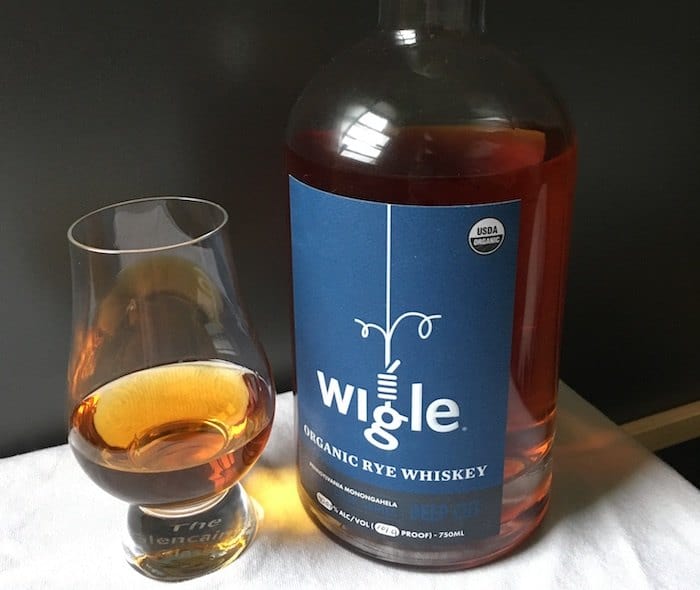 Vital stats: Heirloom rye grains, distilled in a copper alembic still, aged for 14 months and bottled at cask strength that appears to be hand-written on the bottle (mine was 50.95 percent ABV). Wigle’s website lists a 750-milliliter bottle at $75.

Appearance: Much darker and richer looking than your typical whiskey, appearing more copper than the usual amber.

Nose: My first whiff gave me an initial blast of alcohol that made me cough a bit, but a second whiff gave way to an interesting blend of aromas. With a strong undercurrent of rye, the nose takes on a sweet, mellow orange flavor, overlaid with simple syrup and given complexity with notes of bitters, ginger, cloves, chai and a touch of smoky oak.

Palate: The first sip and really any sip of Wigle’s Deep Cut will be anything but subtle. Once on the tongue, this whiskey blitzes the mouth with a blast of rye to the point that it’s challenging to really distinguish much flavor other than sweet rye and spicy rye. That starts out just on the sweeter side with a few citrusy and spice notes and then swings wildly to its more fiery, alcohol side, at least for someone who likes their whiskey fairly sweet, subtle and delicate.

However, it is worth pointing out that this spicy rye flavor is exactly what Wigle was aiming for by using “bold cuts” of rye. For those who would like a more subdued rye, adding a few drops of water will tone that down a bit, though you’ll still mostly be just pondering the flavor of cereal grains as sip down your pour.

The bottle warns that this Deep Cut is Wigle’s most “assertively rye-forward” and will please “just heroes.” That summary is essentially correct, assuming “heroes” are rugged frontiersmen who have lost the ability to taste anything but the most potent of flavors. While an excessively fiery rye didn't appeal to my palate. it's worth remembering that a fiery rye was what Wigle intended Deep Cut to be. I had pondered giving Deep Cut a lower rating for my personal experience, but I boosted their score to reflect Wigle accomplishing their objective.

Still, I’d suggest you only drop that $75 on this bottle if you’re absolutely sure you want a very fiery, spicy blast of rye. I don’t typically do this, but in this case I’d recommend adding a few drops of water to your dram, though you still can pretty much just expect a tamer rye.