Mad River Distillers describes their “farm-to-glass” concept as using rye grain in the mash bill that is local and non-GMO whenever possible. Sticking with the local theme, Mad River Distillers operates out of a renovated horse barn making “artisanal spirits from scratch” using “heirloom” grains and water from a “150-year-old natural spring.” 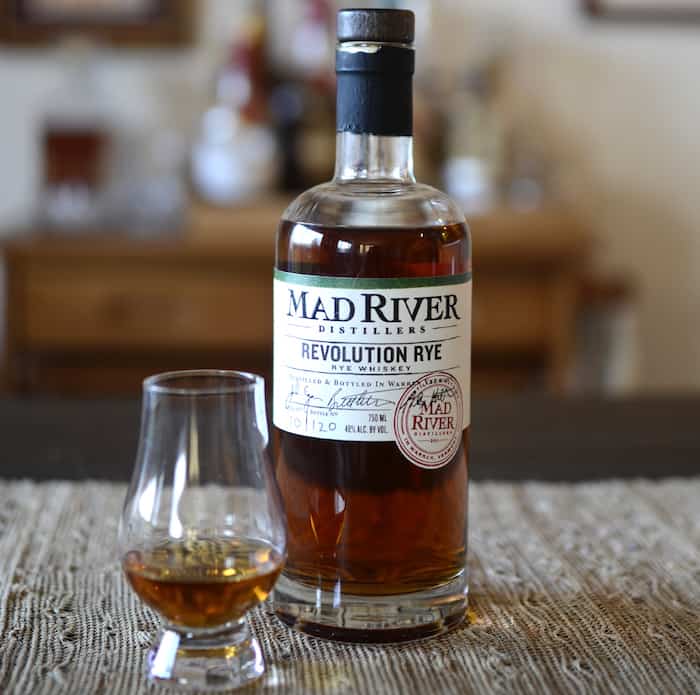 For Revolution Rye, the mash bill is 100 percent rye (similar to the Canadian rye whiskey used by a few different brands). Interestingly, the Revolution Rye mash bill uses three types of rye grain, including a chocolate malted rye.  A portion of the rye is toasted, which Mad River claims “releases aromatic chocolate and mocha notes into the distillate.”

Mad River Distillers Revolution Rye suffers from the common challenges of many start-up distillers, such as trying to sell younger whiskey at a higher price than established brands. Young whiskey just doesn’t have a very good appearance or nose. To address these issues it appears that Mad River Distillers is using small format barrels, meaning less than the usual 53-gallon barrels used for aging whiskey. While small format barrels will speed up coloring of the whiskey, this short cut does not speed up aging of the whiskey. In my opinion, only Balcones has truly mastered the nuances of small format barrel aging.

Vital Stats: Revolution Rye is a one-year-old whiskey bottled at 96 proof and prices over $50. As mentioned above, the mash bill is 100 percent rye, with three different types of rye used.

Appearance: Revolution Rye appears honey-brown in the glass with weak legs. For a one-year-old whiskey, the small format barrels added a surprising amount of color to the whiskey.

Nose: Out of a Glencairn glass, the nose has very strong hay and cereal grain notes. Underneath the almost overpowering grassy notes, I detect the faint cocoa notes that the toasted rye allegedly adds. The overall impression left on me is that of wet cardboard.

Palate: On the front, the cereal grain notes carry over from the nose. As the flavor unfolds, the cocoa notes make a brief appearance but are pretty quickly overpowered by bitter grassy notes. The finish is grassy, dry, bitter, and unfortunately lingering.

While I tip my hat to Mad River Distillers for providing a different spin in the increasingly crowded craft rye whiskey market, this is not a good whiskey. The flavors are very disjointed, and the cocoa notes are particularly off-putting. Some of the issues with Revolution Rye could be attributed to small format barrel aging, but the notes imparted by the toasted rye and chocolate malted rye just do not fit in a rye whiskey.

Mad River Distillers is transitioning to large format barrels, so perhaps some of their future rye whiskey offerings will be better.

Shares
1k
Views
Share on FacebookShare on TwitterGet Our Newsletter
Cheers to the Dads! Personalize a bottle of his favorite whiskey to create a modern gift for the modern man. Use code: FATHERSDAY20 for $20 off your next order of $100 or more at ReserveBar