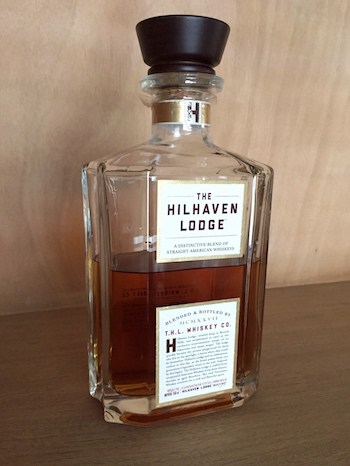 My last visit to Los Angeles included staying in a posh boutique hotel on Melrose Ave. in West Hollywood and finding a reasonably priced pour of George T. Stagg (2015) to pair with my liquid nitrogen infused meal at Ink. Just up the road from there lives Brett Ratner, a film and television producer and director known for Rush Hour and Prison Break, as well as epic parties. He currently lives in a legendary estate in Beverley Hills known as Hilhaven Lodge. If I had his money, I would get someone like Diageo to craft a special whiskey for my property, which is exactly what Brett did.

This product was developed by said producer and director for his iconic home, and it has a novel concept as a blend of bourbon from the 2000s, a Tennessee whiskey from the 1990s, and a rye from the 1980s. There is no official statement about age or product that went into this blend. However, some internet sleuths suspect it is blend of Bulleit, Dickel 12-year, and Bulleit Rye, all of which Diageo would have access to.

Another wrinkle to the story is that Ratner sued Heaven Hill after Heaven Hill sent cease and desist letters to Ratner. Fortunately, they settled out of court and continued to produce the spirit that sits in front of me, which was bottled at Stitzel-Weller in Louisville, Kentucky.

Given that story, and the contrast it has with the typical whiskey legend about elders in the Old South, it could be easy to hate on something like this. However, setting some of the judgment aside, the idea of the blend is very interesting. Let’s see what it delivers in the glass.

Vital Stats: 80 proof, bourbon from the 2000s, Tennessee whiskey from the 1990s, and rye from the 1980s, no age statement, no indication of the various mash bills or brands included, suggested $50 for 750ml.

Nose: The nose is dominated by ripe peach, vanilla bean, a hint of heat, and a touch of cedar. It’s appealing and friendly.

Palate: Neat, this starts off with a notable prickly heat (a bit surprising considering the proof), a smooth, moderate sweetness with notes of vanilla bean, raw honey, oak, and rye spice. The finish is moderately drying, floral, and spicy.

A few drops of water turns the nose into malted milk-ball candy and nectarine, and takes most of the heat away. On the tongue there are additional notes of nutmeg and more complex wood, with a sweeter and more lingering finish.

A splash of water takes away some of the distinctive qualities and punchiness of the experience overall, makes the nose woodier, brings a touch of smoke to the tongue, and makes the finish a bit hotter.

Going back to the story, whiskey isn’t usually associated with California film producers and Beverley Hills mansions, but at least in this instance, maybe it should be. This was a very drinkable and pleasant pour, with enough going on that having multiple pours stayed interesting. It’s also low enough in alcohol that it could be a real crowd pleaser, and a really nice introductory pour for newer American whiskey drinkers. A couple drops of water is the recommended preparation. The price is also about right considering what is being charged right now, especially considering the age of some of the stuff in here.

More critically, this whiskey isn’t the most distinctive, but it has enough going on that this bottle could easily disappear from my shelf in no time while taking in an old Chris Tucker/Jackie Chan buddy-cop movie and dreaming of stumbling into a star studded chill-out party in LA.

60
Shares
491
Views
Share on FacebookShare on TwitterGet Our Newsletter
Get Jefferson's Ocean at ReserveBar. Shop now!