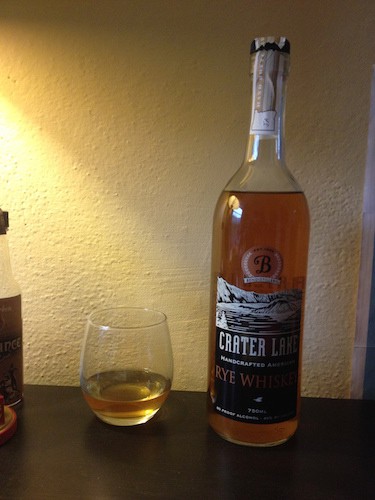 Bend, Oregon’s Crater Lake Spirits (Bendistillery) prides itself on being “among the oldest small-batch distilleries,” having opened its doors in 1996. Best known for gin and vodka, their Crater Lake Rye is a relatively recent addition to the lineup. The distillery markets it as a throwback to the pre-Prohibition days when small distilleries across the country produced their own rye whiskies, leading to a range of widely varying local versions of the spirit.

This 80-proof whiskey is a high-rye expression, with a mash bill of 95% rye and 5% barley. Additionally, unlike most modern whiskeys, it isn’t chill-filtered, leading to a cloudy appearance and, some would have it, preserving flavors that are lost with filtration.

Though no age statement is given on the bottle, it’s aged only a year, according to the distillery, a decision they say also helps preserve the spicy, fruity character of the grain. In short, it does look like a fairly unique rye, both on paper and in the glass.

The label notes “deep toffee notes and a peppery spice.” Here’s how my impression stacked up against that description:

Appearance: Deep gold in color and quite cloudy.

Nose: The nose is distinctly hot, with white pepper notes and a hint of smoke. Underlying everything, though, is a pervasive chemical burn I can only compare to nail polish. After some time in the glass, the nose opens up, and warmer notes like honey, ginger, and cinnamon are more noticeable.

Palate: This whiskey is definitely less harsh on the palate, though still hot. Cinnamon and oak mingle with white pepper and some dark fruit.

The overall impression this whiskey leaves is a level of heat surprising for such a low-proof spirit. However, it opens up after some time in the glass, and is considerably more aggressive on the nose than on the palate: while the nose borders on harsh, it comes across as merely peppery on the palate. I find I don’t dislike this whiskey, though it’s certainly a little rough around the edges.

I give the Crake Lake Rye whiskey a score of 82. You can hunt down a bottle of it through some different online retailers here.