What’s Next at High West Distillery

News broke last October that Constellation Brands swooped in and purchased Utah’s High West Distillery for approximately $160 million. It was the latest in a series of craft acquisition dominoes – which are still falling piece by piece – and it led whiskey drinkers to the same question we always have: what’s next?

The best way to find an answer is to get boots on the ground. I undertook the task at the start of this July, visiting High West’s Saloon and original distillery in Park City, as well as its larger distillery and visitor’s center in nearby Wanship, Utah, located on the grounds of Blue Sky Ranch, to learn more about the distillery and its future.

It’s staggering to think of the speed of evolution for High West. The company was formally founded in 2006. Their first-ever release and still their flagship, Rendezvous Rye, debuted in 2007. Their Park City Saloon opened in 2009. The Wanship distillery began operation in December 2014, and opened its doors to the public in  September 2015. A year later comes the Constellation deal.

“The goal was to build High West, not just to sell,” explains Justin Lew, High West’s head of marketing, and tour guide on my visit. But money talks, as they say. “For a brand this size that’s a big number.” 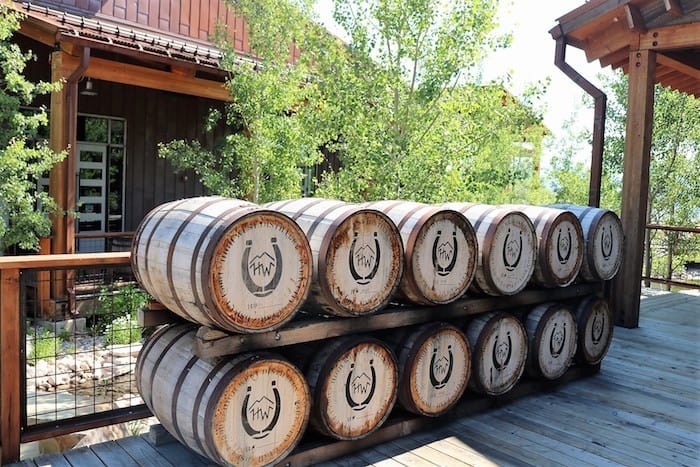 High West had been in talks with several other suitors, so while all those zeros certainly make an impression, also key was that the distillery felt they had the right fit with Constellation before moving ahead. “They understand how special High West is,” Lew says. “They basically said, ‘we get what you guys are doing, let’s continue to support it.’”

The entire High West team is still in place, from the top down, and the whiskey-making ethos they have remains intact as well. “We didn’t want somebody to come in and bastardize it,” Lew says.

High West felt comfortable with Constellation, its leadership, and their experience, and that comfort at least partially came with a bit of their own field research. For instance, part of the High West team visited California’s Ballast Point brewery which Constellation purchased for a cool $1 billion in November 2015, and asked them what changed in the wake of the sale. The response, according to Lew, was, “’nothing really, we can just do it better.’”

That’s the goal for High West, too. “We want to get that same thing,” Lew says.

In the specific case of High West though, the first question that came to mind in the aftermath of their acquisition was whether or not that meant the distillery had imminent plans to become a fully self-distilled producer.

“We will always be blenders,” Lew says, rebuffing that notion. “It’s in our DNA.”

So… no, that’s not the plan. But that doesn’t mean that steps aren’t being taken in that direction, either. At the Wanship distillery, where they deploy a 1,580 gallon Forsyths pot still with an attached column, they’ve been distilling nothing but rye whiskey for the past 10 months.

That stock will start being worked into their Double Rye, replacing existing sourced stock as needed. Blends are a moving target, and it’s about maintaining flavor profile, not individual components. “The taste is what matters, the blend will change,” Lew explains. “The goal is to make that consistent.”

They’ve also been experimenting with peated distillate – potentially as a replacement for the peated Scotch found in Campfire. That work is being done at the Saloon, where they have a 250 gallon hybrid pot still with a 20-plate column. “This is basically now our tester,” Lew says of the original setup they have in Park City. But beyond such experiments, the Saloon still is also used to produce their oat distillate, used for the Utah-only Valley Tan, as well as Silver Oat. 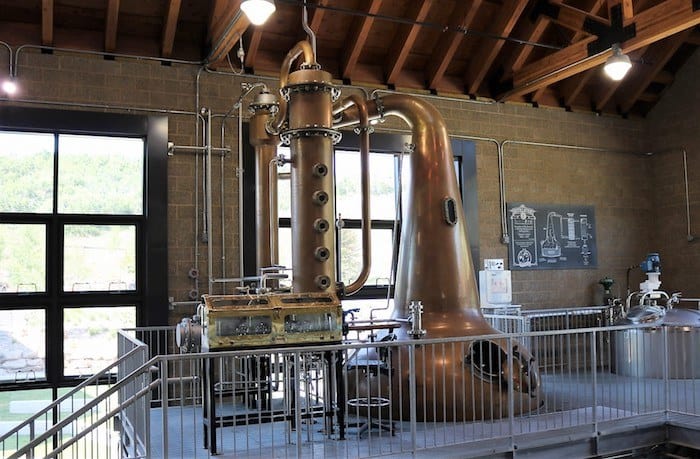 Not only is High West steadfast that they’re blenders by trade, but they’re also aware enough to know what they’re not: namely, a storied Kentucky bourbon distillery with near-limitless capacity. In other words, they believe they’re not going to make better bourbon than what they’re buying, and certainly not for less money. In fact, Lew says that one of the core objectives post-acquisition is to secure more, and better, bourbon stock from other producers, not to start distilling bourbon themselves.

But…there’s always a but. And High West does indeed have plans to release a large-scale, fully self-distilled product. And you only need to take one look at that Forsyths still to guess what it is: single malt.

Don’t start counting down the days because you’ll be waiting until at least 2019 or 2020, but keep your eye out for it in the future. Point being, they’re taking their time to make sure it’d done right.

“[Constellation] wants growth…but at the same time, you can’t rush it,” Lew says. “When High West releases a single malt, it better be awesome!”

Overall production increases are on the way as well. The Wanship stillhouse has space for four stills, although there’s only one in there now. “The plan is to have a mirror image,” of the Forsyths rig they already have in place. In fact, still number 2 is apparently already purchased, but it’s sitting in Salt Lake, waiting for somebody to give her a call and invite her to the party.

It’s here where there seems to be some growing pains related to the acquisition. “Now it’s justifying when you need certain things,” Lew says. From the outside looking in it might seem as if such a transaction also directly translates to unlimited, immediate spending power. That’s not the case though, and it’s not just full speed ahead with a blank check – quite the opposite, under new ownership. Lew tallies off the questions: “How much can you sell? What can you do now? When do you make that transition?”

Nevertheless, in a world filled with corporate lingo like “financial models” and “strategic decisions,” fans of High West should feel more than comfortable with its future. Their innovative approach to blending remains, self-distilled single malt is on the way, and they’re only going to grow from here.

Personally, I suggest you let the financials figure themselves out. All you need to do is put yourself on the list of the 200,000 annual Saloon visitors and 30,000 annual distillery visitors High West receives, and soak up not just the booze, but the views. Gazing out on the sprawling expanse of the Uinta Mountains, High West may have one of the best distillery settings the world over. Such a sight calls for a drink, of course.