The distillery team at Westland in Seattle, Washington is known for doing some fun April Fool’s whiskey pranks in years past. 2021 certainly looks to be no exception to this, with plans in the works for a tongue in cheek auction of some American single malts being spun up as if one would be bidding for rare The Macallan bottlings.

This April Fool’s day auction, according to those behind it, is being called “The Inheritance” and is described as showcasing a special collection of whiskeys that’s “tailor made for shrewd investors who recognize that whiskey today is far more valuable when left in the bottle to appreciate rather than be wasted by being poured into a glass.”

“It breaks my heart to see rare whiskeys opened and enjoyed, thereby cratering its value,” noted Westland’s Matt Hofmann in a prepared statement. “For those searching to grow their wealth and stature, there is no better investment than whiskey. With prices being paid for whiskey at auction these days hitting record highs, we’d be fools not to get in on the game. We’re not fools. We’re tycoons. Why else would one want to be in the whiskey business?” 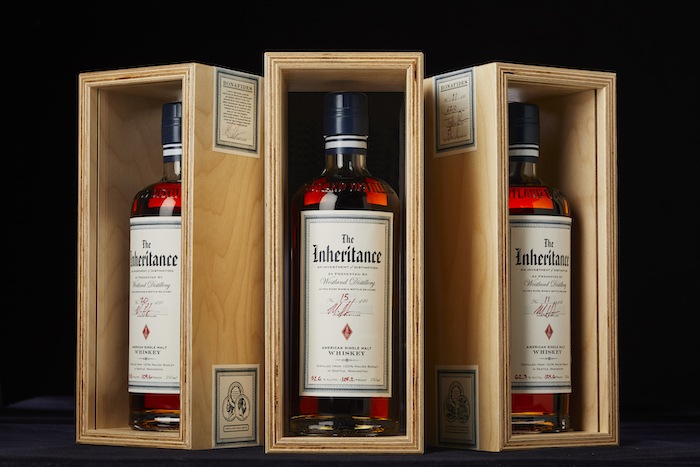 Westland The Inheritance (image via Westland)

In playing along with the gag, it is noted that “each bottle is certified Prestigious Whiskey by the sole authority of Westland Distillery, and hand-numbered and signed by Westland’s Master Distiller, Master Blender, Master of Operations, and Master of Ceremonies. Each bottle comes in an impenetrable box, with a Certificate of Authenticity from the International Institute of Prestige & Distinction, and a Last Will and Testament so the whiskey can be formally added to the owner’s expanding estate.”

While this is being done all in good humor, and proceeds from the auction (starts at 12 am Pacific Time) will benefit Big Table, a charity that helps out restaurant and hospitality workers, a perusal of the catalog sent to us prior to the bottlings going up online actually reveals some interesting offerings. Bottle 13, for example, is a 70 month old American single malt that was aged the whole time in a Madeira cask after having been distilled from Washington malt.