If you keep up even partway with the whiskey press releases like we do, it starts to feel like there’s nothing new left in the world of whiskey. Sending your spirit into space? Somebody’s way ahead of you. Shipping it around the world to age? Old news. Finishing it with gold flakes? Been there, done that.

But fret not; if you’re determined to achieve novelty, no matter the cost, opportunities still abound in the world of cask finishing. Sure, you could choose one of the usual suspects – charred American oak, sherry hogsheads, Syrah casks. But when your options are so extensive, why be pedestrian? Here are a few distilleries pushing the boundaries – in one case, what I would call the outer boundaries – of cask finishing. 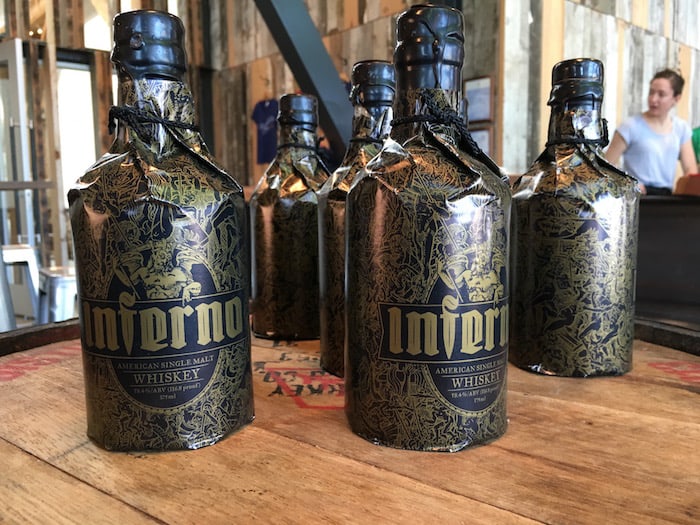 Westland Inferno, an American single malt aged in a Tabasco barrel, tastes as crazy as it sounds. (image copyright The Whiskey Wash)

Westland Distillery, the straight-laced single malt distillery based in Seattle, turned a few heads when they released Inferno, a single malt aged in a Tabasco barrel, on April Fool’s Day this year. No joke, this whiskey is spicy: Axis of Whiskey described it as “unrelenting and borderline painful.” Our editor-in-chief, who got to try it as part of his recent visit to the distillery, pretty much agreed with the Axis assessment.

Abraham Bowman released a limited-edition a bourbon that spent six months resting in casks that had previously held coffee beans. The experiment sounds like it might have been a successful one (Jake Emen calls it “a wonderful and unique experiment”), but the question remains: can you drink it at work on Monday morning?

There’s not much out there about this one, but Instagram posts hint at the existence of a vanilla extract cask-finished bourbon from Heritage Distilling, based in Gig Harbor, Washington. I guess it sounds OK in theory…

Ah, my personal favorite. Fisky, from independent bottler Stupid Cask, is a Bruichladdich single cask finished in a barrel that once held herring. Before you dismiss it as nothing more than a stunt (which, I guess, it is), consider this: there’s historical precedent that Scottish distillers may have once used fish casks for the same purpose. Reception was mixed: Serge from Whisky Fun enjoyed it, while Whisky Cast called it “by far the worst whisky I’ve ever tasted.”