Sugarlands Distilling Company recently offered a sneak peak of its new distillery during a Pot Still Capping Ceremony, in which attendees were able to see the copper “helmet” of one of the largest pot stills in the U.S. permanently bolted into place.

The new still has a capacity to distill 4,500 gallons of whiskey mash and will be used to make Sugarlands’ Roaming Man Whiskey, as a part of the phase one completion of the distillery’s Kodak, Tennessee footprint. The distillery will serve as one of the largest distilleries in the state.

“Roaming Man Tennessee Straight Rye Whiskey has won dozens of international awards, including ‘Best Whiskey’ from the American Craft Spirits Association in 2019 and the Double Gold from the San Francisco International Spirits Competition in 2021,” President and Founder of Sugarlands Distilling Co. Ned Vickers said in a prepared statement. “Featuring the largest copper pot still in the U.S. and set against the backdrop of stunning Kodak, Tennessee, we are looking forward to opening this new facility to our customers, partners and friends.” 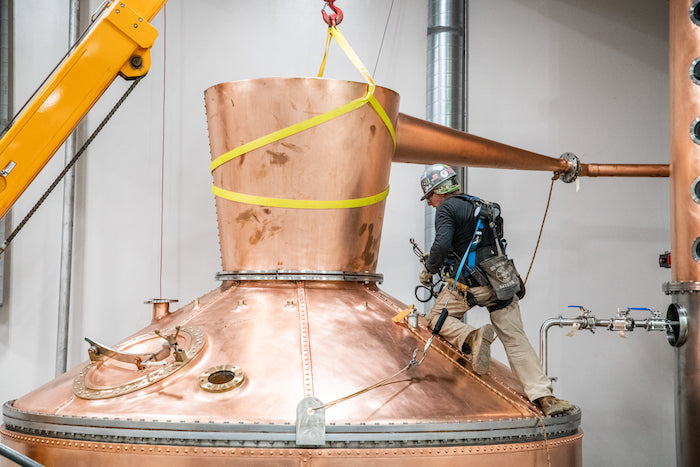 Roaming Man Tennessee Straight Rye Whiskey is pot-distilled, aged in premium barrels and bottled twice a year. The new distillery and barrelhouse will expand the distribution of the bottling nationwide over the coming years. Made possible with grant support from the Tennessee Department of Agriculture, the facility will use raw materials like Tennessee grown white corn, rye, and malted barley to make the whiskey.

“At the Tennessee Department of Agriculture, we’re excited to support the distilling industry in Tennessee including Sugarlands Distilling Co. We are proud that the Ag Enterprise Fund was a part of their growth and expansion, and we are looking forward to seeing their continued success,” Assistant Commissioner for the Business Development Division Keith Harrison said.

The total facility will feature 58,864 square feet with a 32,364-square-foot distillery as well as a 26,500-square-foot barrelhouse. The distillery will be able to employ more than 40 new production staff at the Kodak location, including distillers, blenders, bottlers, barrel warehousemen, maintenance, and programming personnel. while supporting Tennessee farms.

“When we opened Sugarlands Distilling Company back in 2014, I had no idea what a ride we were in for,” Master Distiller for Sugarlands Distilling Co. Greg Eidam said. “I feel like we grabbed ahold of a rocket ship and there is no telling how far it will take us. I am absolutely honored to be surrounded by this amazing team as we’ve grown Roaming Man into the nationally recognized and celebrated Tennessee Rye whiskey it is today.”