Seattle-based Copperworks Distilling Co., which a number of months ago debuted a Washington State peated malt whiskey, has doubled down on that in a way with the recent release of its new Double Peated Whiskey.

Crafted from what’s described as a blend of old and new-world malt whiskey production techniques, the single cask release gets its flavor from two sources: the barley and cask. Copperworks received a cask from one of its partners in the U.K. that was said to be especially rich in peat flavor after aging Ardbeg Whisky in Scotland a few years ago. It is from this they took the opportunity to create the new release.

The distiller started with its Washington Peated Single Malt Whiskey, made from locally grown barley malted with peat from a bog in Washington State. That whiskey matured for over three years in new American oak and then it was finished for an additional seven months in the Ardbeg cask to create this expression, allowing for a taste profile of savory and earthy notes, along with the more traditional Islay Scotch smokiness and a sweetness from the new American Oak cask. 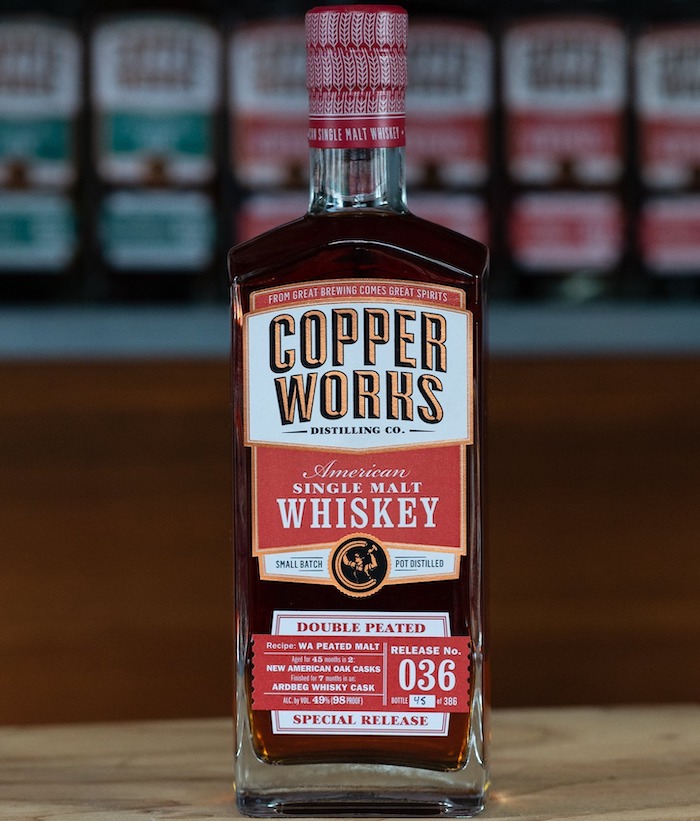 According to official tasting notes, the Copperworks Double Peated Whiskey (Release 036) gives aromas of driftwood campfire, leather and creosote. On the tongue, sweet, demerara sugar leads into notes of candied orange peel and seaweed. The finish is minty, ashy, earthy, and briny, while still sweet and silky.

Founded by co-owners/distillers Jason Parker and Micah Nutt, Copperworks Distilling Co. is located on the waterfront in downtown Seattle where it produces small-batch American Single Malt Whiskey, a series of gins, and vodka, all from malted barley. Named “2018 Distillery of the Year” by the American Distilling Institute, the distillery has won numerous local, national and international awards. Its spirits are currently found on the shelves of bars, restaurants, and retail stores through Washington State.

Bottled at 46% ABV, Copperworks Double Peated Whiskey is retailing for $76.49, with a limited release of 386 bottles available through the distillery.

7
Shares
840
Views
Share on FacebookShare on TwitterGet Our Newsletter
Get Jefferson's Ocean at ReserveBar. Shop now!