Editor’s Note: This whiskey was provided to us as a review sample by Copperworks Distilling. This in no way, per our editorial policies, influenced the final outcome of this review. It should also be noted that by clicking the buy link towards the bottom of this review our site receives a small referral payment which helps to support, but not influence, our editorial and other costs.

Talking about whiskey is almost as fun as tasting whiskey (almost). Even more to the point, the two go hand in hand. Your impression of a whiskey is greatly influenced by the context of the experience, and that is all part of the magic of sharing and getting to know a spirit and your approach to further tastings.

Talking about whiskey also can reveal polarized views and preconceived notions before a drop has even crossed some lips. One of the most polarized opinions when it comes to the thoughts on whiskey is the use of peat when malting the barley. A generalized view tends to lead people into the camps of either love or hate, however it is the subtle nuances that truly provide the best talking points.

Seattle’s Copperworks Distilling recently entered the discussion by releasing an American Single Malt Whiskey that not only sourced barley entirely from the State of Washington, but also used in-state sourced peat in the malting process. While using peat to dry malting barley (and therefore imbue a distinct smoky flavor and aroma) is not new to whiskey, it is very much associated to a specific region and style. Those styles can vary subtly or greatly depending on any number of factors, but they still evoke a sense of tradition and place.

Copperworks is here relying on that tradition by giving the taster a sense of the differences of the peat from the Skagit Valley in Washington State versus that of peat from other parts of the world such as Scotland. This peat is made from different plant matter and has different characteristics. The barley itself also comes from the same valley and the barrels used in maturation are new American oak casks.

For a much more in depth documentation of the whiskey’s journey, please follow along with their very detailed product specification sheet. 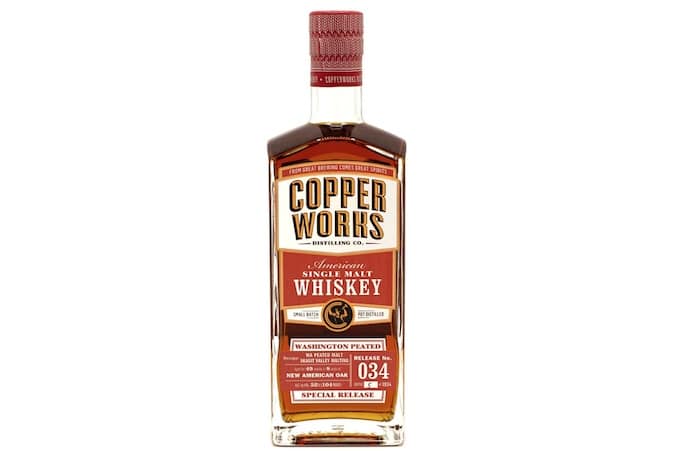 Appearance: Sepia toned with a semi-opaque quality as viscous tears form on the side of the glass.

Palate: Astringent with clearly present Alder wood characteristics and hints of orange spice. Evocative of a walk in the damp woods, then coming inside to warm up by the fire, and the green wood finally catches with a snap and a hiss (as you try not to get mud on your floor).

Copperworks is definitely trying to plant their flag in the muddy bogs of the Pacific Northwest. This Washington peated malt whiskey presents a subtle smokiness and bold, dominant wood overtones. The newness of this expression (and the relatively short aging period of four years) gives it a two dimensional rigidity, reminiscent of a teenager figuring out their true personality.