The combination goes back ages, coffee and whiskey. Intrigued by this pairing, the Australian coffee roaster and distiller behind “Mr Black” asked a simple question: what if their decadent liquor made from 100 percent specialty arabica coffee was aged in whiskey barrels before bottling?

A partnership with Vermont’s WhistlePig Rye Whiskey provided the answer in the form of “Mr Black x WhistlePig Barrel Aged Coffee Liquor,” a limited edition label that launches in the U.S. this month.

To bring this new spirit to life, WhistlePig shipped some of their 10 Year Straight Rye Whiskey barrels to Australia, where coffee-snob-turned-spirits-maker Tom Baker experimented to determine the ideal aging process. 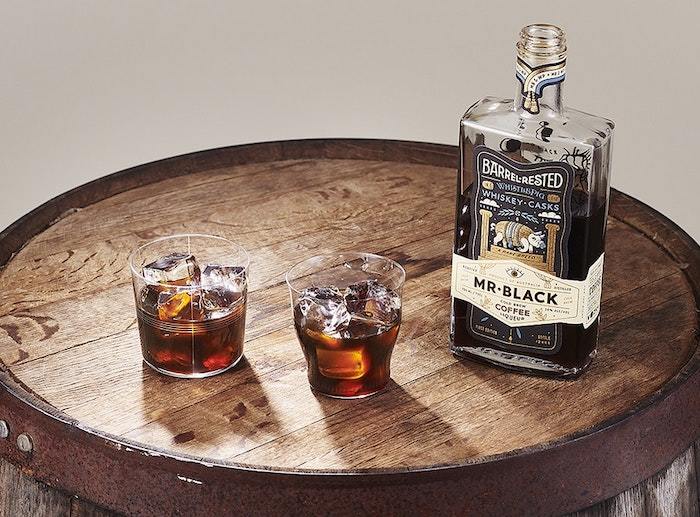 He found WhistlePig to be the right partner for this creation after Baker met the WhistlePig team at an industry event in 2019, where they bonded over their respective craft spirits. The makers are said to have found that the two brands complemented each other in the flavor department.

Baker explained that they start the new spirit with its base … Mr Black, the premium coffee liqueur. The aging process needed to last long enough for the flavors of the barrel to seep into the liquor, but not so long that the spirit would lose its luster.

Since oxygen is the enemy of good coffee, the barrels were constantly topped off … a process more in line with winemaking than whiskey distilling. Baker has a former winemaker on his team, and through careful experimentation they were able to determine that six months was reportedly the right amount of time.

The result is a blend of bold tasting notes, according to the distillers … rye, oak and coffee form a balance of flavors. Rich, dark, and oily with distinct coffee aromas enriched by oak, honey, vanilla, cloves, and a hint of smokiness. On the palate, expect cold brew coffee, complemented by the rich rye spice of WhistlePig. This leads into a long-lasting and mouth warming tannic finish.

“This is one of the biggest spirits we’ve ever made,” Baker said. “It’s Mr Black turned up to 12 in terms of flavor and texture.”

“WhistlePig is a brand with such a sense of place up there in Vermont. We’re a world away down under in Australia, but working our mitts off to make it in the USA,” Baker said. “We loved the idea of bringing our home and our future together in a bottle.”

458
Shares
1.8k
Views
Share on FacebookShare on TwitterGet Our Newsletter
Get The Glenlivet 18 Year Old at ReserveBar. Shop now!