“No, we’re not sourcing anyone’s whiskey,” Corky Taylor said two years ago during my first visit to Kentucky Peerless Distilling. The chairman’s smile was simultaneously smug and friendly, revealing real joy that, as the sole financier of the project, things would be done his way. “That was never going to be an option for us. … We know that means a large investment and a lot of waiting. We’re fine with that.”

Two years later, KPD’s first whiskey, a rye, is two months from bottling and release. Taylor admits he’s ready to see the flow of money reverse course with whiskey revenue, but he’s as confident as ever that the wait has been worth it.

The rye, as he says, is quite good. At 20 months, it’s grassy, floral, lightly oaked, slightly peppery, yet not fiery even at 107 proof. On the palate, texture and flavor are uniform front to back; fully balanced and delicious. The finish is silken.

Taylor, along with son Carson Taylor, the distillery’s president, and head distiller Caleb Kilubrn, all wanted a straight rye made their way, and there’s no denying they’ve achieved a unique result. A year ago, when whiskey historian Michael Veach tasted it and deemed it ready for release, the Taylors said no. 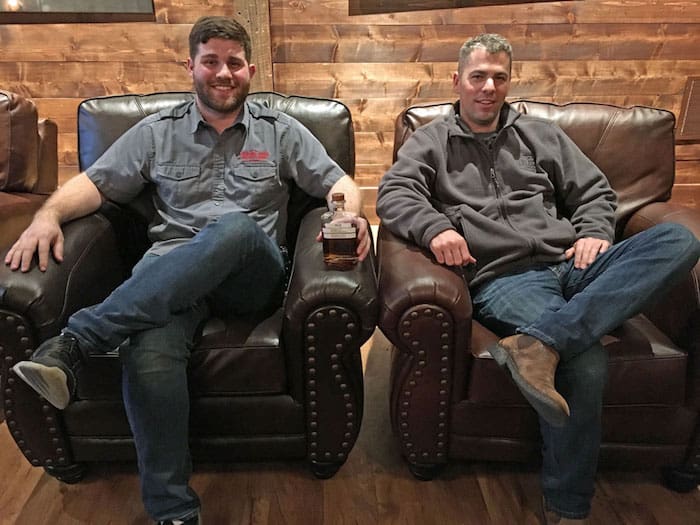 “It gets better every time we taste it,” says Carson Taylor, KPD’s president. “We’ll release some single barrels and some barrel proofs. We’ll mix it up.”

Each bottle from this initial 80-barrel release will cost “just under $100,” Corky Taylor says, and he’s confident the liquid justifies the premium price. He says there were no shortcuts taken in the materials and work that went into making it, and that once the market learns the story of the rye and tastes it, they’ll agree it’s worthy of a Benjamin.

And worthy of Henry Kraver, Corky Taylor’s great-grandfather, who owned and operated Kentucky Peerless in Henderson, Ky., from 1889 to 1917. The rye recipe isn’t Kraver’s, Taylor allows, but he said it harkens back to his family’s distilling past, when methods of sweet-mashing and low barrel-entry proof were more commonly practiced.

“It absolutely is tougher,” he says, when asked if sweet mashing poses a challenge to pH management of cooked, fermenting grain. After leaving the still at 133 proof, KPD’s bourbon and rye both are barreled at 107 proof. “We rely on our technology and our people to make it as consistent as possible, and that takes time and effort.”

And that’s part of why it’ll cost $100 per bottle. That and the costs incurred with running a modest-scale operation in downtown Louisville. Total whiskey output each year is around 1,700 barrels: roughly 200 more than are filled every day at Jim Beam’s Clermont, Ky., plant. Even Henry Kraver’s distillery produced 200 barrels per day in the 19th Century. Yet as always, Corky Taylor’s smile implies his distillery is perfectly sized.

“It’s all done right here,” Taylor says. “We grind the grain only when we need it, we cook it, we ferment it, distill it and age it here. We’re proud of that. … It’s part of why it’s a premium product.”

When the rye is released, just before the May running of the Kentucky Derby, it’ll happen exactly one century after Kraver released his last whiskeys. Yet while the Taylors acknowledged that milestone’s significance, they say it’s not momentous enough to warrant a big launch party. That’ll happen two years from now when KPD’s bourbon hits the market.

“We’re excited about the rye, but we know this is Bourbon Country,” Corky Taylor says. “So we’ll hold off on doing the big splash for two more years.”

When that happens, Taylor, who “tried retirement but didn’t like it,” will hit the road promoting his whiskeys. Before launching KPD, Taylor owned and operated a business that created employee retirement packages for other companies. It grew so large that he moved to traveling for business via shared private jet to access far-flung clients quicker. (He sold the company in 2009.) Yet despite knowing he’ll be riding in the cramped confines of commercial jets, Taylor, a man of sturdy frame, is ready for a road trip.

“Even though we’re Kentucky boys, we’re going to New York, Chicago, Miami, Los Angeles—you name it—and I’m looking forward to it,” Taylor says, his eyes widening as he discusses the adventure. “Washington D.C. will be our first place out of Kentucky, and we’ll start at Jack Rose. Bill Thomas, the owner, said he wants us to be there. He asked us to be there.

“You have to go where the people are, where the money is, and that’s what we’re going to do. Somebody’s going to buy something out there.”