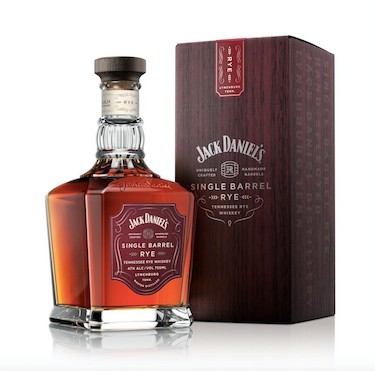 A few years back, Jack Daniel’s (which turns 150 this year), teased rye whiskey fans with the limited edition release of its Rested Tennessee Rye expression. It has also been delving into single barrel experimentation, the most recent being its Barrel Proof offering. Now it is bringing together these two elements into a new offering – meet Jack Daniel’s Single Barrel Rye.

Jack Daniel’s Single Barrel Rye is a far cry from good Old No. 7, and thus will appeal to not only fans of that bottling, but rye drinkers in general. What you have here is a 94 proof bottling which, according to Jack Daniel’s,

is crafted using a unique 70 percent rye, 18 percent corn and 12 percent malted barley grain bill giving the whiskey a clean, sweet tone at the tip of the tongue with a more distinct and slightly shorter than other Single Barrel offerings. Rye also uses the same cave spring water from the Jack Daniel’s Hollow, proprietary yeast and charcoal-mellowing process that’s been used in the distillery’s 150-year-old Tennessee Whiskey recipe. From there, the liquid enters a charred White American Oak barrel, crafted at Jack Daniel’s very own cooperage and set to age in the upper regions of the barrelhouse. In this resting place, the whiskey is exposed to the extreme temperature variations that a Lynchburg, Tennessee season brings.

The interaction of the whiskey, the wood and the environment brings out distinct flavor profiles that transcend what you would expect of a rye whiskey to become Single Barrel Rye.

“Rye was one of the earliest forms of American whiskey and as the Master Distiller at Jack Daniel’s, I’m proud to honor that history with the release of Single Barrel Rye,” said Jeff Arnett, Jack Daniel’s Master Distiller, in a statement. “There is a reemerging trend of rye whiskeys and we are excited to be able to give friends of Jack Daniel’s a chance to experience it.”

“You never want to over-barrel a rye whiskey so it was important for us to stay true to the style with grain forward character rather than barrel character while still allowing our barrels to interplay with the whiskey. I’m confident that everyone will be as impressed as I am with the taste and character of this bold new rye offering.”

Limited tasting notes from Jack Daniel’s are below for this new rye release and, should you want to snag a bottle, expect to pay around $50 per 750 ml.

Rye starts off lightly sweet and mid-palate opens up to a dried fruit and trail mix flavor, finishing slightly shorter than the other Single Barrels as Rye is much more about grain rather than barrel character.