The Cedar Ridge distillery is something of a pioneer when it comes to the American craft whiskey scene, having been established by Jeff and Laurie Quint in 2005. Located in Iowa, bourbon made from local corn has long been their signature whiskey, though they also have other offerings such as a malt whiskey and a celebrity tied expression known as Slipknot N0. 9 Iowa Whiskey.

Now another bottling has been announced, this time taking the form of an American single malt.

The new The QuintEssential American Single Malt Whiskey, according to those behind it, is said to be “the culmination of a lifetime of work for Cedar Ridge Founder and Master Distiller Jeff Quint, and his son, Head Distiller Murphy Quint.” Making use of blending and aging techniques from the family’s generations as also being winemakers, what’s resulted from that is something the Quints believe truly makes their American single malt unique. 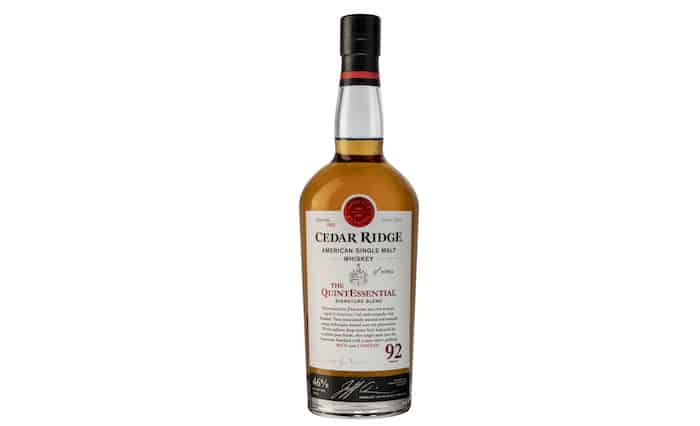 “While bourbon is a natural product for us here in Iowa, both Murphy and I have shared a lifelong interest in good Scotch,” said Jeff Quint in a prepared statement. “For nearly 15 years now, we’ve been perfecting our own American version single malt. One thing we figured out early on is you can’t rush it.”

To this end the Quints “use only a single strain of two-row malted barley prepared exclusively for Cedar Ridge at the Prairie Malt plant in Biggar, Saskatchewan” as the base grain for this whiskey. One thing I wondered about this – does it truly make it an “American” single malt if it is making use of what seems to be Canadian grain?

As it stands right now, the American single malt title, technically, does not exist as a legitimate whiskey category in the eyes of federal regulators, despite efforts of a group of distilleries, including Cedar Ridge, known as the American Single Malt Commission to make it otherwise. The Commission puts forth in proposed standards for such a category that, among other things, the whiskey be made from “100% malted barley.”

Given there is no specific reference to where the malted barley should come from, The QuintEssential would thus fit the America single malt classification despite having what seems to be Canadian grain within it.

Moving beyond this, the Cedar Ridge team, once the grain arrives on site, “painstakingly control every step of the process – from milling, mashing, fermenting and double-distilling, to the unique barrel aging process, right through the final bottling.” The aging process in particular is interesting, given that most of the barrels are Cedar Ridge’s own (they also function as a winery).

For its first cask treatment, the bulk of the whiskey is aged using ex-bourbon barrels. The whiskey then gets a second treatment in barrels that once held brandy, rum, wine, port or sherry. Finally, it is all married in the distillery’s oak solera vault for a final rest before bottling.

“It’s during these two cask treatment phases that the whiskey develops its complexity and richness,” said Jeff Quint. “And by never emptying the solera beyond the halfway mark, we gain a consistent complexity you can’t get from single barrels.”

“Our system is the best of both worlds,” added Murphy Quint. “We’re taking many single barrels of single malt and utilizing them to influence our solera vat over time. In a sense, each can be looked at as an individual ingredient for our solera, and we’re cooking-to-taste.”

As it stands now plans call for The QuintEssential American Single Malt Whiskey to initially be available this month in Iowa, pricing around $60 per 750 ml bottle and bottled at 46% ABV. Select markets throughout the United States can also expect to see availability in the coming weeks.

99
Shares
1.5k
Views
Share on FacebookShare on TwitterGet Our Newsletter
Cheers to the Dads! Personalize a bottle of his favorite whiskey to create a modern gift for the modern man. Use code: FATHERSDAY20 for $20 off your next order of $100 or more at ReserveBar