Editor’s Note:  At the end of this past May The Whiskey Wash was invited to visit Cedar Ridge Distillery, the first distillery to open in Iowa since Prohibition. While Cedar Ridge covered all related travel expenses, editorial control of this article remains with The Whiskey Wash.

Iowa is America’s home to corn, there is no doubt about that. What’s interesting to note around this is that while many distilleries across the United States make use of that state’s corn in their bourbons, it is seldom something thought about in terms of origin of raw materials for the mash bill at the end of the day – we just don’t typically take note of where the corn comes from.

If you are Cedar Ridge Distillery out of Iowa, however, it is all about the corn’s origins because, frankly, you are surrounded by it on all sides.

Cedar Ridge was founded by Jeff and Laurie Quint in 2005. Jeff Quint’s family has “farmed and distilled spirits” for generations, so it seemed a logical step forward for him to create a legitimate distillery. The move has paid off well for the Quint family, with Cedar Ridge becoming a recognized leader in craft whiskey production, particularly when it comes to bourbon.

The production process at Cedar Ridge, according to them, goes something like this – they store and mill their corn and grain on-site from corn grown on their own Iowan family farm that’s belonged to them for generations. From there, they note, “lautering our mash separates the liquid wort and spent grain. The wort is then fermented and distilled, while the spent grain is hauled off as animal feed for local farmers. Twice distilling our whiskeys to a higher proof, and removing the impurities results in a cleaner, more approachable sipping whiskey.”

During my time spent at Cedar Ridge, which was prior to the release of their whiskey collaboration with noted band Slipknot, I got the sense the Quint family, and those who work for them, reflect a true American work ethos for making the best quality craft bourbon they can. The quality and care shows strongly in the whiskeys they make, as the distillery has won multiple awards such as the American Distilling Institute’s “2017 Distiller of the Year” and “Best American Craft Whiskey” at the 2016 New York World Spirits Competition.

As part of my visit I sat at length over a glass of Iowa bourbon straight from the barrel and interviewed Murphy Quint, who is currently Cedar Ridge’s Director of Operations. Note this conversation has been edited for clarity and brevity. 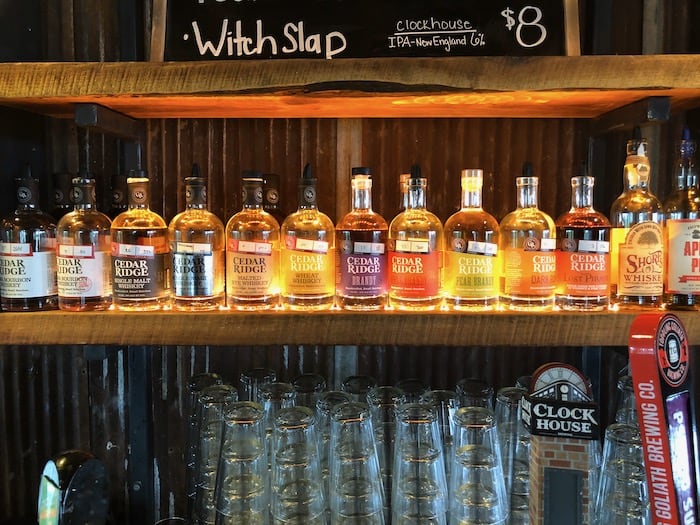 The Whiskey Wash (TWW): Talk a little bit about the core products in the distillery’s whiskey line.

Murphy Quint: Our number one flagship is our Iowa Bourbon Whiskey. That’s half of everything we sell, which makes perfect sense because here we are in Iowa, the corn capital of the world. It makes sense to produce whiskey made from corn, which is bourbon, so the bourbon is our absolute flagship.

Then after that, you get into our single malts. We’re putting a lot of single malt away right now. We believe that American single malt is on the verge of booming, so we’re gearing up for that, and that’s kind of our second lead product, is our single malt. Then you get into some of the others, which would be a malted rye whiskey and a wheat whiskey. The wheat whiskey is actually more of a niche product that we make about once per year, but we do want to have it around, whether it’s to release as a wheat whiskey or to one day become kind of a blending product into other whiskeys. 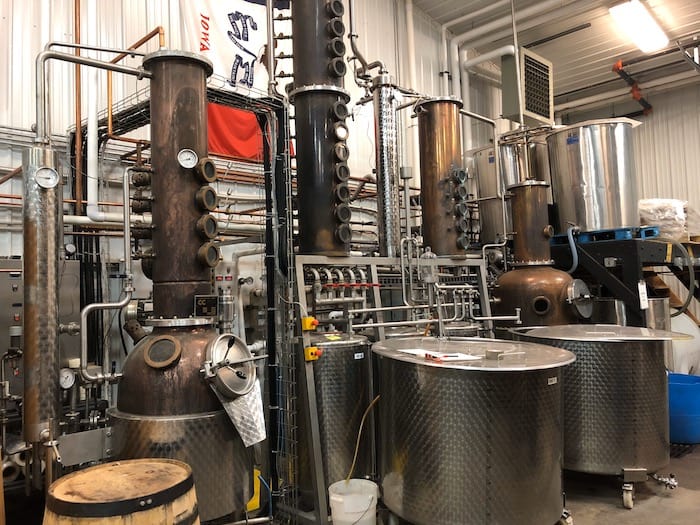 TWW: With the Iowa Bourbon, you guys are a bit of a farm distillery in that you grow some of the corn on property your family owns. Talk a little bit about having access to that and what that’s like.

Quint: That’s probably one of my favorite things that we do, is that we grow our own corn, and we actually grow all of our own corn for our bourbon in Winthrop, Iowa. My Grandpa Melvin, who is my absolute hero, he grows all of our corn on his property. What that does is it allows us to have full control over the process, I mean literally from when the seeds go into the ground until when we’re putting the whiskey in the bottle.

TWW: Is this some type of heirloom corn that you’re making yourself, or the kind of regular yellow corn? 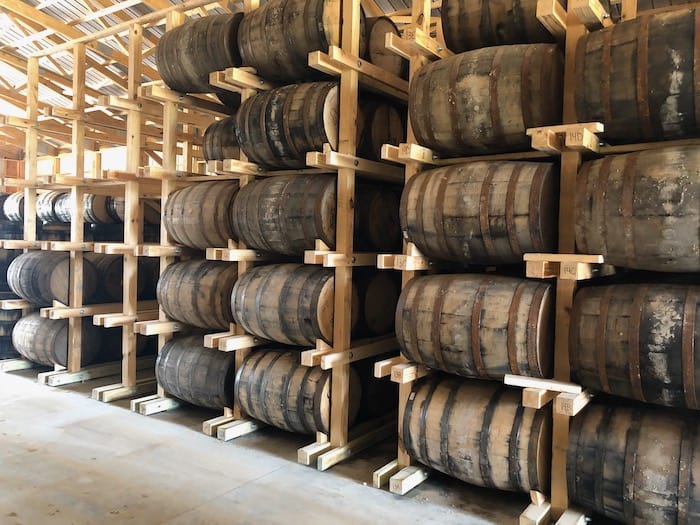 Quint: It’s yellow corn No. 2, which is the standard variety out here. You know, to be transparent and obvious, there are a lot of distilleries throughout the entire country that are buying corn that comes from Iowa that has to be yellow corn No. 2, so I wouldn’t say that it’s the variety of corn that we’re using that makes us unique, but it’s the fact that we know who our supplier is. It’s my grandpa. It’s actually my mom’s corn, because it’s her dad growing it.

TWW:  With your flagship product being this Iowa Bourbon, what would you say exactly is Iowa bourbon?

Quint: Iowa bourbon is not technically a category, for instance like Tennessee whiskey. There are actual things that you have to do in order to be a Tennessee whiskey or a straight whiskey. There technically, at this point in time, is no meaning to an Iowa bourbon. It’s something that personally I would like to look into and set some ground rules, to actually be able to use that term.

As of right now, the way that we use it is truly just a nod to Iowans. I mean, this is all Iowan corn that we’re using on the product. It’s made for Iowans, it’s supported by Iowans. Without the people of Iowa, we would not be here right now, because no one would have supported us during our infancy stages. It’s really just a tip of the cap to Iowans. We feel it’s important to have that word on our bottle. 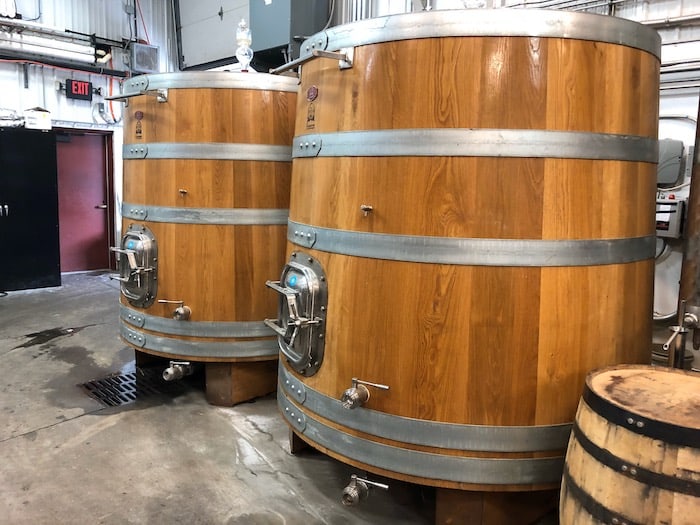 TWW: Talk a little bit about what you guys are doing with your single malt program.

Quint: This is my absolute favorite thing that we do, and it’s so complex that it does get even a little bit difficult to describe. We’re putting a ton of single malt away, as I mentioned earlier, and the way that we do it, it’s fairly complex. Every barrel of single malt we put away is double wood or double oaked, however you want to phrase it. It starts out in its initial American oak cask.

Quint: Typically used. We do a little bit of both, but typically it’s going to be used. Once it’s been in its initial American oak cask for a couple years, we’ll transfer it to some sort of finishing cask, whether it’s an ex-red wine cask from our own winery, or an ex-brandy cask from our own brandy production, or ex-rum from our own rum, or some oak that we’re importing like Hungarian oak, French oak, et cetera. You know, we’re going to lay it down for a second treatment, which is already pretty neat in itself.

Then you’ve got all these different barrels of single malt sitting in our barrel sheds throughout the property, and what we do next is we strategically marry them into a solera vat that we’ve got inside of our winery building. We strategically marry these different single malts into that solera vat, and it adds so much complexity because you’ve got all these different influences like I just mentioned – ex-brandy, ex-rum, ex-wine, unique oaks, as well as some peated malt, even – so it’s just got so much complexity to it. We bottle it halfway down, then we strategically fill it back up, so it’s constantly evolving in flavor profile, and it’s something that we’re very proud of.

TWW: Talk a little bit about the aging process here in your distillery. 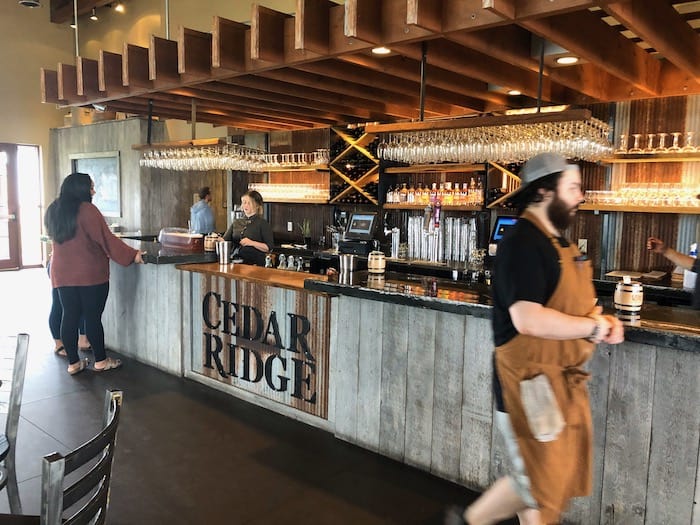 Quint: One thing that we do here that is a little bit different than some distilleries, we actually don’t do any climate control in our barrel sheds. We’ve got barrel sheds scattered throughout the property, throughout an 80-acre property, so we’ve got plenty of land to build on. We don’t pump any humidity into the room. We don’t regulate the temperature. What we’re trying to do inside of these barrel sheds is really let Mother Nature run its course.

The Iowan temperature fluctuates so much, not only season by season but day by day. Like for instance, last night it probably got down to 40 degrees, and today it’ll hit the upper 70s, so that temperature fluctuation causes a lot of magic to happen inside of the barrels. Rather than prevent that from happening, we want that to allow it to happen, to really do some funky stuff in the aging process.

As a result of these practices we do lose a lot more to evaporation than your average distillery. We lose about 20% of every barrel to the angel’s share, and that’s due to not regulating that temperature, and that’s due to not humidifying the room. There is a tradeoff, but it gives us the whiskey that we want in that barrel, and it allows us to take advantage of that Iowan climate.

TWW: With the Iowa climate, do you find that that kind of aging pushes the proof up or down, typically?

Quint: Here, it goes down, and that’s something that we’ve been talking about for a while that we want to put some research into, because it seems, depending on your region, the proof can go up, the proof can go down. Here in Iowa, it goes down. Every barrel we put away, we put away at 120 proof. That’s our barrel-in proof, and when it comes out, it’ll be anywhere from 116 to 119, so it’s going to happen. The average is usually about 117.5, so it drops.

TWW: All right. Thank you for your time. We appreciate it.

Quint: Thank you very much.

195
Shares
1.3k
Views
Share on FacebookShare on TwitterGet Our Newsletter
Read More Whiskey News
Whiskey Review: Cascade Moon Edition No 1
Cheers to the Dads! Personalize a bottle of his favorite whiskey to create a modern gift for the modern man. Use code: FATHERSDAY20 for $20 off your next order of $100 or more at ReserveBar