Editor’s Note: These whiskies were provided to us as review samples by Bruichladdich. This in no way, per our editorial policies, influenced the final outcome of this review. It should also be noted that by clicking the buy links in this article our site receives a small referral payment which helps to support, but not influence, our editorial and other costs.

The yearly release of Bruichladdich’s super heavily peated spirit, Octomore, is like Christmas for scotch fans. If you are like me, then there can never be enough peat. While Bruichladdich’s signature namesake whiskies are unpeated, they produce peat bombs like no other with malted barley sometimes coming in over 300 phenol parts per million (PPM).

The Octomore 11 series for 2020, however, ranges from 136.9 PPM to 194 PPM. The key with the recent Octomore expressions is the barley itself. Yes, we know Bruichladdich loves to play with terroir. 28 acres of barley were planted on Islay two miles from the distillery. The harvest is from 2013, and unlike barley grown on the Scottish mainland, Islay grown barley is much more dramatically exposed to the elements.

Because of the mist from the Atlantic Ocean swells and climatic conditions, the structure of the barley is inherently different. Therefore, the barley flavor will impact the outcome of the Octomore 11.1 and 11.3. The Octomore farm is taken care of by James Brown, and the barley is harvested, malted, and distilled separately to ensure the Octomore series is a single field, single vintage, single malt. Bruichladdich says, “comparing the 11.1 and 11.3 gives one of our finest lessons in stratospheric smoke and barley terroir.”

The Octomore 10 Year matures five years longer than the 11.1, 11.2, and 11.3. Instead of focusing on the barley influence, the 10 Year focuses on cask influence. The liquid inside the casks was distilled in 2009 after a 2008 harvest of only Scottish grown Optic Barley. While the barley came in 208 PPM, the extra maturation should calm it.

A whopping 77 casks make up the Octomore 10 Year in the eleventh series. Like the other Octomore whiskies in this series, the maturation is predominantly ex-bourbon barrels. So let’s break it down because this gets complicated: 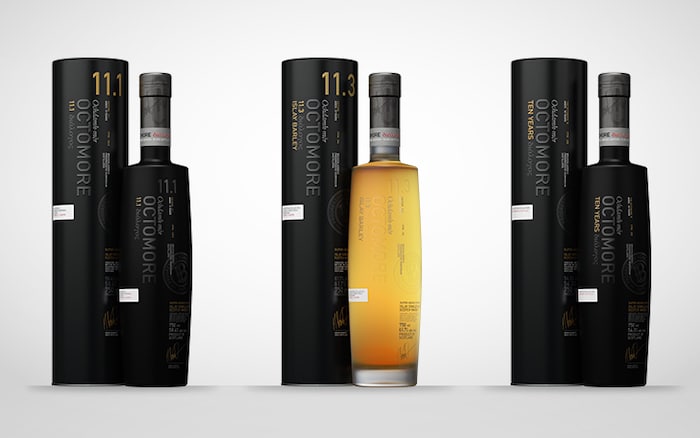 Appearance: Village of the Damned Blonde

Nose: The nose on this one gives off soil, but it is more than just damp forest floor. However, it is almost like salty clay, or even crushed oyster shell. The dram shines brightly with lemon verbena and bursts of eucalyptus. Rose hips lull in the background with dulled vanilla.

Palate: The mouthfeel is oily, which is apparent from the beading on the GlenCairn. Upon first sip, the heat from the ABV was excruciatingly unbearable. However, once I realized what I was dealing with, I could get past it. I notice vanilla at the beginning with touches of orange and lemon. There is a bit of sweet cream in the middle. While the peat smoke is there, it is more sooty than smoky; almost as if chewing on activated charcoal. The main flavor profile is fresh pencil shavings with some Challah. Overall, the whisky is peppery.

Final Thoughts: I highly recommend adding chilled water, or serving it up. The ABV combined with the black pepper and smoke is overpowering. I do love the smoke on this compared to 11.3. However, something just doesn’t meld.

Palate: The mouthfeel is velvety with a touch of oil. The heat from the ABV builds, so it is not so overwhelming. The malt really stands out with cracked black pepper. Dried oak lingers on the tongue for the finish.

Final Thoughts: Compared to the 11.1, it is less oily and less abrasive. Both have a peppery quality. Overall, I found the 11.3 less smoky than the 11.1. The smoke opens up with water, but the sweeter flavors are the showstopper.

Nose: An overload of vanilla hits the nostrils first. It is reminiscent of moist vanilla cake with buttercream frosting. Lemon zest rounds out the whisky. The peat smoke hides compared to the others. It is only after a while that it wafts in the glass. There is a breadlike quality to it near the end.

Palate: It’s slowly warming with a soft mouthfeel. It has a small astringency to it from the ABV, but overall it does not attack the palate. Lemon mixes with cream. The nose is almost deceiving as the palate is abundant with peat smoke. Damp wood comes through at the end with cocoa and espresso notes.

Final Thoughts: By far, the Octomore 10 Years is the best of this collection. You can drink it neat without killing the palate. Opened with water, the dram exacerbates the lemon. It is more balanced than the 11.1 or the 11.3. Quite delightful! This will not disappoint.