Scotland’s Bruichladdich distillery is known for its different ranges of Scotch whiskies that appeal to different types of drinkers. For the lover of the super heavy peat style, it offers up yearly bottlings of its Octomore series. It is now onto its 11th edition of this release.

The new Bruichladdich Octomore 11 series, according to those behind it, aims to once again appeal to those that love the type of whisky this particular label brings to market. In the minds of the distillery team Octomore 11 “ripped up the whisky rulebook” in that they’ve distilled “the world’s most heavily peated single malt,” aged it “for just half the conventional maturation time” and then bottled it at cask strength.

“Octomore… it’s that moment when the rules change,” said Bruichladdich head distiller, Adam Hannett, in a prepared statement. “You just have to trust in your instincts. There’s no questioning whether we’ve made the right choices with our Scottish barley, fermentation time, in the patient distillation or the oak we’ve filled. From that point on, you just have to relinquish control and let the liquid lead you.

“It’s like you’ve got to take a leap of faith… close your eyes and jump… see where you land.”

Plans call for three of the four expressions more fully outlined below to be available in the Untied States starting at the beginning of October. The one that will not be released domestically is 11.2. 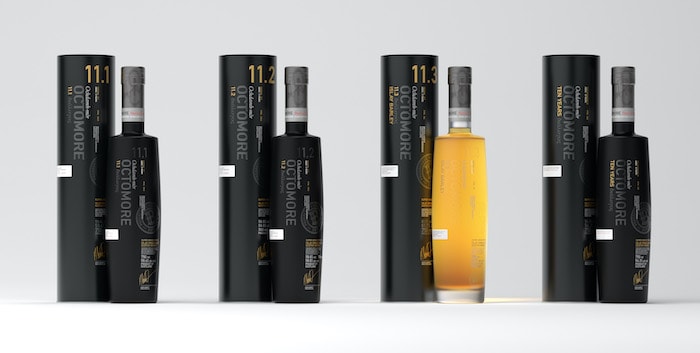 Exposing the structural brilliance of the pure, unadulterated Octomore super heavily peated spirit, the 11.1 edition is powerful, understated and vibrant. Underpinned with a delicate balance of smoke and sweet vanilla from the ex-American oak casks, this single malt has spent just 5 years in contact with fresh first-fill wood. The presence of peat on the palate is huge, and yet is incredibly balanced with clean fruit and floral notes.

Distilled in the winter of 2014 from the 2013 harvest of 100% Scottish barley, two parcels of alluring spirit would eventually be combined to create this Octomore 11.2.

Parcel One makes up 25% of the final composition. It was matured full term in ex-European oak casks, hailing from the Pauillac region of France. The winemaker is known to blend Cabernet Sauvignon, Merlot, Cabernet Franc and Petit Verdot varieties, and the casks therefore impart a strong influence on the final round and rich character of this 11.2 spirit.

Parcel Two makes up 75% of the final composition. It was first filled into ex-American oak before being transferred into casks from the St Julien region of France. It would mature in these exquisite ex-Cabernet Sauvignon wine barriques, known for their rich aromatic youthfulness, from May 2018 to January 2020. It would be married with Parcel One for the final months of its life.

Comparison of Octomore 11.1 and 11.3 is a fine lesson in barley terroir combined with smoke. While both editions are malted to 100+PPM reading, the differences in barley character from the respective growing region is ever present.

Grown on Octomore farm, this Islay barley is raised by the distillery’s friend and farmer James Brown. It is harvested, malted and distilled separately, even from other Islay barley harvests, in order to become a single field, single vintage single malt.

Situated just two miles from the distillery, this specific 2013 harvest was raised in Irene’s field, where only 28 acres were planted that year. Unlike its Scottish Mainland counterpart, this field is exposed to the climactic conditions and salt spray of wild Atlantic swells. The distinctive flavour and rarity of this barley is something truly special when combined with the clean ex-American whiskey cask maturation.

Sitting alongside its 11 Series counterparts, this Ten Year Old brings a subtler, more mature dimension to the otherwise youthful exuberance of the .1, .2 and .3 spirits in the 11s series. While Adam deliberately keep’s the barley influence forward in the .1 and .3 editions, the .2 and Ten Year Old editions introduce cask influence at varying ends of the Octomore age spectrum. While the malt for the Octomore Ten Year Old is initially higher in PPM, the influence of those 5 extra years results in a calmer, deeper spirit.

Seventy-seven casks in total have been combined to create this super heavily peated Islay single malt. The maturation profile is predominantly ex-American whiskey cask matured, both first and second fill, with hints of previous releases introducing an additional dimension of Virgin Oak maturation.