Editor’s Note: This whisky was provided to us as a review sample by The Glenrothes. This in no way, per our editorial policies, influenced the final outcome of this review.

Founded in 1878, The Glenrothes Distillery in Scotland’s Speyside region is part of the Edrington Group, a consortium that also includes Scotch whisky heavyweights Macallan and Highland Park. Given that company, it’s no surprise that about 90% of Glenrothes’ whisky is matured in sherry casks, giving it a rounded character, a resonant aroma, and the potential to successfully age for a very long time.

Perhaps in a nod to that age-worthy nature, until recently, the Glenrothes released its whisky by vintage date rather than age statement. This release, The Glenrothes 12 Year Old, represents a move in a different direction. It’s the second-youngest member of the recently introduced Soleo Collection, Glenrothes’ brand new core lineup, which is organized according to the standard metric of years in barrel rather than year distilled.

Named for the Spanish term for sun-drying sherry grapes before pressing, the series pays tribute to Glenrothes’ dependence on sherry casks for its distinctive character. This bottling is stored entirely in sherry casks for the duration of its maturation, then proofed down to 40% and bottled at natural color.

For longtime Glenrothes fans, the loss of the vintage dates might feel troubling, but at least the brand had the good sense not to get rid of its immediately recognizable ping pong paddle-shaped bottles. And it’s not as if the brand has never reinvented itself before. Like so many Scotch distilleries, it’s changed hands numerous times during its almost 150-year history, enduring expansions and setbacks and rebrands and the all the rest. So, what’s this new Glenrothes got for us? 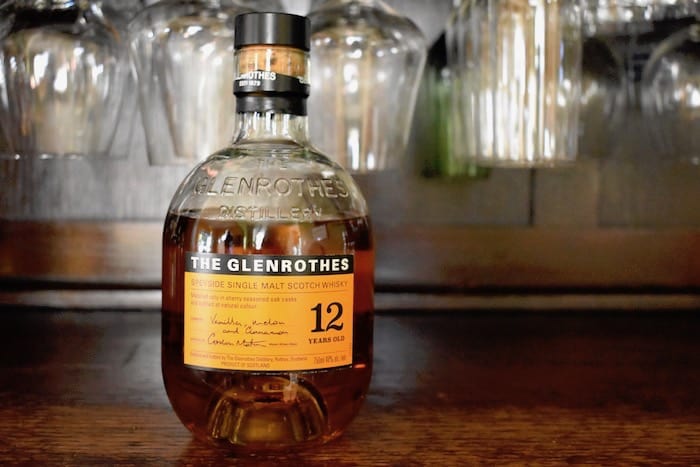 Nose: A light aroma of mint, melon, honey, and nut brittle. There’s a fair bit of sherry on the nose, with walnut, apple skins, and a touch of struck match.

Palate: A soft, creamy mouth feel that’s very much contiguous with the nose. There’s more honey, more melon, more mint, and more nut brittle. Things move along with a touch of vanilla bean, a light dusting of cinnamon and clove, and a short, sweet, sugary finish that reminds me of glazed donut holes.

Light, easy going, not terribly complex but certainly enjoyable. It’s not as dense or chewy as you might expect from its sherry-centric cask program, but its pleasantly fruity tones and silky texture are certainly appealing. The Glenrothes 12 Year Old is a good candidate for an aperitif whisky, and might go well with pre-dinner savories like cheese, nuts, and salami.

One way to think about...
READ ARTICLE 
American / Bourbon

Whisky Movie ‘The Water of Life’ Premieres On PBS This June