Editor’s Note: This whiskey was provided to us as a review sample by The GlenAllachie Distillery. This in no way, per our editorial policies, influenced the final outcome of this review. It should also be noted that by clicking the buy link towards the bottom of this review our site receives a small referral payment which helps to support, but not influence, our editorial and other costs.

Most distilleries in Scotland have a long and rich history, often centuries old. However, The GlenAllachie Distillery cozied in the Speyside region was only erected in 1967, making it relatively new. The first production run made nearly three million liters, or almost 800,000 gallons, of whisky. Production went so well that the distillery had to double the number of stills within six months. Alas, like many Scottish distilleries in the 1980s, The GlenAllachie Distillery earned mothball status.

After purchasing it from Chivas Brothers and Pernod Ricard in 2017, Billy Walker, Graham Stevenson, and Trisha Savage gave The GlenAllachie Distillery the independence it deserves. Of the whiskies produced, it is the cask strength, single cask offerings that are highly sought after. To extend distribution to the United States, the distillery partnered with ImpEx Beverages. Out of this partnership, an exclusive cask strength, single cask bottling has been created.

The GlenAllachie 2006 14-Year-Old Port Single Cask #7862 was selected by Impex Beverages from barrels hand-selected by Billy Walker. The whisky from the single port pipe rings in at 55.4% ABV and has a beautiful blush color to it. When they say it is limited, they mean limited to 332 bottles. Specialty retailers in AK, AZ, CA, MA, MN, NY, and TX will carry this exclusive whisky. 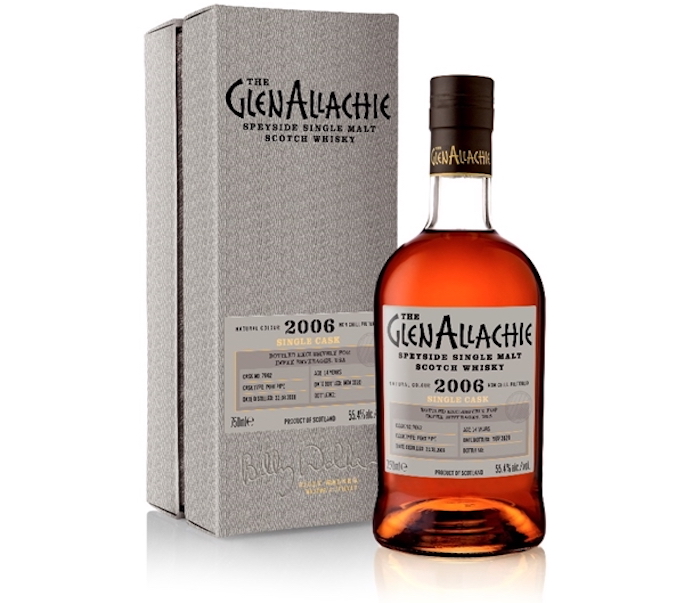 Nose: Fresh garden mint and spearmint mingle with baby powder right off the bat. The whisky is very reminiscent of rosé on the nose. The nose is also perfumy with florals; specifically geraniums.

Palate: As soon as the whisky touches the tongue, it tastes like a dissolving sugar cube. The mouthfeel is oily but still light. I was not expecting a smoky Speyside. While the whisky is still light and floral, it has a sooty, or charcoal, taste to it. In the background, there is a brightness to it like citrus peel and clean linen. Near the finish, it becomes earthen like a damp log fallen in the forest. Heather lingers on the breath.

For a Speyside, I was really surprised by the complexities and smoke that erupts over the palate. To the lucky few who can find a bottle, I am jealous. The Port pipe imbues the whisky with a gorgeous tinge of blush. The nuances from the brightness to the heather make this exclusive cask bottling from The GlenAllachie Distillery exceptional.