Editor’s Note: This whiskey was provided to us as a review sample by Stauning Whisky. This in no way, per our editorial policies, influenced the final outcome of this review. It should also be noted that by clicking the buy link towards the bottom of this review our site receives a small referral payment which helps to support, but not influence, our editorial and other costs.

Nine men in a Danish village,

And who do you think they be?

The butcher, a doctor, a teacher, a helicopter pilot and four engineers

And all of them making whiskey.

It doesn’t exactly rhyme. And there are no baker and candlestick maker – though a bakery was suggested to the group in lieu of a distillery.

Stauning Whisky, very simply named for the village it’s located in, started as many independent craft distilleries do – as a hobby turned business. The idea was making whisky, of course, but a specifically Danish whisky. In that vein they strongly emphasize the terroir, using local products to a tee.

The local products are all sourced within 3 kilometers of the distillery (~1.86 miles to us Yanks). This means the barley and rye, the water, and even the peat used in the smoked expression. As an added bonus, Stauning uses heather in their smoked expression, of course also sourced locally. Local meets ultra-traditional with the methods of floor malting the barley in-house, traditional peat excavation, and using an open fire for their double-distillation in copper pot stills.

Stauning’s approach makes a natural fit with the New Nordic movement. The movement came in with the new millennium, following global trends of using seasonal and local produce (a bit of a challenge in Scandinavia, where growing conditions aren’t exactly ideal), to highlight and improve traditional foods. The movement was mainly started at the restaurant Noma, which loved Stauning so much they quit offering other whiskies.

Stauning Rye is the distillery’s first whisky. It makes use of both the local barley and rye, and is matured in new American oak. Rye has since been used in other expressions with differing finishes, including Double Dip, Bastard, El Classico and Curious. The flagship Rye took home the Best Danish Rye award from the World Whiskies Awards in 2018. 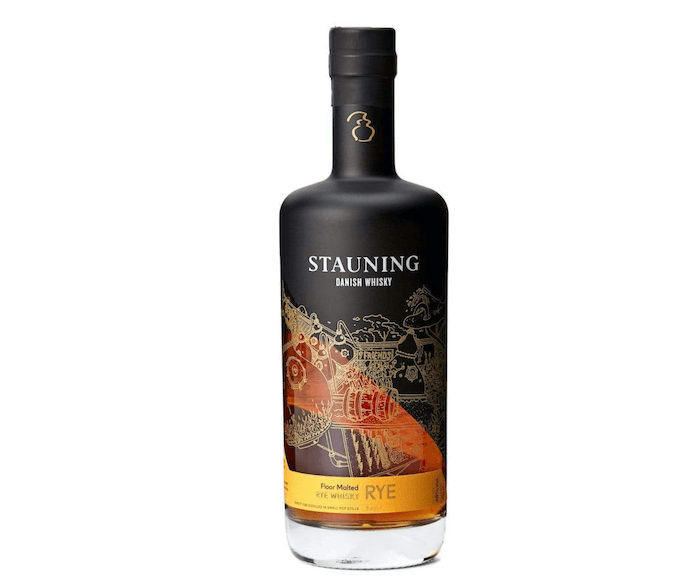 Nose: Overripe pear and yellow apple, with a hint of cloying musk and sweet almond.

Palate: Strong rye grain taste leads the way into the rest of the flavor, while remaining as a foundation. A touch of heat accompanies the start as well. White pepper blends into Nordic bready herbs like dill and caraway. Popcorn pops on the back palate. The finish is fairly quick.

Not entirely dissimilar from other small distillery, terroir-oriented ryes I’ve tasted, and can certainly hold its own in quality. A particular distinction is the lack of overt sweetness or grassiness that often defines a rye. This whiskey has a little something in common with aquavit – which seems to be the idea, considering Stauning calls it “a liquid interpretation of freshly baked Danish rye bread.” I’ve heard beer called liquid bread before, but as for me, I’ll take the whiskey version.