The Terroir Of Whiskey

For decades, the wine industry has honed in on the transformative effect of terroir on its multi-billion dollar product. Science has shown how the soil, the microclimate of a region, and the topography of where the grapes are grown change and effect flavors.

But what about a distilled grain alcohol, aged in barrels? For years, scholars, brewers and distillers have debated the issue of terroir in relation to whiskey. And recently, a new study offers proof of terroir’s influence on the brown spirit, more or less settling the debate.

Terroir can, in fact, be found in barley … more significantly, in the single malt whiskey distilled from it. 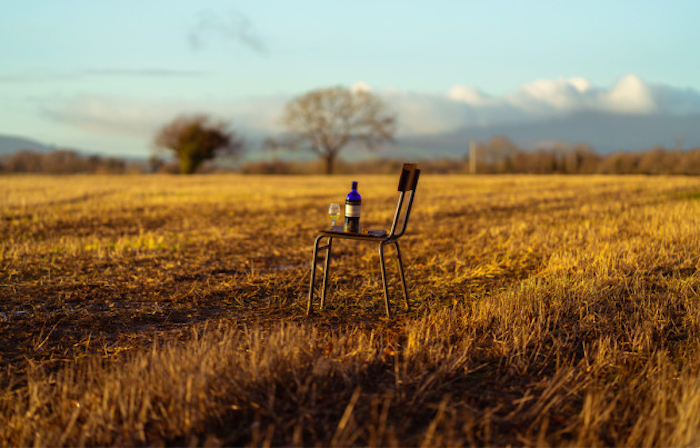 A recent academic study has seemingly settled a decades-long debate on whether terroir has an essential influence on whisky creation. (image via Waterford Whisky)

They studied the concept of terroir – the French principle that factors such as soil, microclimate, and topography together can influence flavor characteristics.

Each sample of barley was micro-malted and micro-distilled in laboratory conditions to produce 32 different whisky distillate samples. They were tested using analytical methods of gas chromatography–mass spectrometry–olfactometry, as well as using highly-trained sensory experts.

The study found more than 42 different flavor compounds, half of which were directly influenced by the barley’s terroir.

The barley from the sheltered inland Athy site had predominantly higher pH levels with increased amounts of calcium, magnesium and molybdenum in its limestone-based soil. It had consistent, higher temperatures and lower rainfall. Whiskey made from this barley was characterized by toasted almond notes, and a malty, biscuity, oily finish.

The more exposed Bunclody site had lower pH levels with increased amounts of iron, copper  and manganese in its soil, which is based on a shale or slate bedrock. The farmland is closer to the coast and was typically subject to more volatile weather. Whiskey from this barley was lighter and floral, with a fresh fruit flavor.

The study found that for the whiskey industry, terroir within spirits distilled from barley would create “regionally specific whiskies” much the same as in the wine industry, such as Bordeaux or Champagne.

Dustin Herb, lead researcher at Oregon State University, said the study investigated the basis of terroir by examining the genetic, physiological, and metabolic mechanisms of barley contributing to whiskey flavor.

“Using standardized malting and distillation protocols, we preserved distinct flavors associated with the testing environments and observed year-to-year variations, indicating that terroir is a significant contributor to whiskey flavor,” he said.

His sentiments were echoed by Mark Reynier, founder and CEO of Waterford, a global whiskey brand based in Ireland. Waterford spearheaded the terroir study.

“Barley is what makes single malt whisky the most flavorsome spirit in the world. This study proves that barley’s flavors are influenced by where it’s grown …  like wine and cognac … whiskey’s taste is terroir-driven,” Reynier said. “Critics claimed any terroir effect would be destroyed by the whiskey-making process, saying there is no scientific evidence to prove that terroir even exists. Well, there is now.”

Reynier said that Waterford uses a “terroir-driven approach” for all its single malt whiskies, with barley from each of its 40 Irish farms harvested, stored, malted and distilled separately each year. Waterford produces whiskey from a hundred different terroirs as single farm origin distillations since the company was founded.

Waterford’s Whiskey Terroir Project was a global effort of academics from the United States, Scotland, Greece, Belgium and Ireland and included professors Kieran Kilcawley and Maria Kyraleou of Teagasc Food Research Centre, part of the Irish Department of Agriculture, Food and the Marine. The study also featured cooperation from Scotland’s leading whiskey laboratory.

“We utilized gas chromatography olfactometry, which enabled us to discern the most important volatile aroma compounds that impacted sensory perception of the new-make spirit. This research not only highlights the importance of terrior, but also enhances our knowledge of key aroma compounds in whiskey.”

This was the first step of the project … to explore the terroir impact via a laboratory malted and distilled spirit for complete production uniformity.

The next stage, to be published in 2022, will further explore the same role of terroir in whiskey, this time using analysis based on Waterford Distillery’s own commercial spirit and matured whiskey.

How does Waterford and its whiskey brands go forward with the debate on terroir settled? Does it come down to marketing or will there be an actual shift in production based on the science of terroir?

Reynier said they are changing nothing.

“We have always, from the get-go, designed our entire operation for production of single malt whiskey around terroir. We produce one million liters of spirit a year distilling one terroir at a time, in complete isolation from field to barrel, and with complete digital traceability systems to prove to anyone who wants to question it, and to show to anyone who is interested in understanding more. It can be done. In fact, it is precisely the same methodology as the great French winemakers,” he said.

Waterford will continue to release whiskies from those terroirs as “single farm origins” for drinkers to compare and contrast.

“We do it knowing that what we do is underpinned by science, and exploring with us the nuances of flavor derived from individual Irish terroirs,” Reynier added. “The only difference now is that no one can undermine us … at least, not using that method. The aim of the separation into terroirs however will be shown in the Cuvée, coming later this year; layer upon layer of terroirs, of spirit flavors, for greater complexity. Knowing that the whole will be even greater than the sum of the component parts.”

This is the beginning of Waterford’s strategic academic endeavor, as the whiskey maker digs deeper into flavor.

“Flavor, that’s what it’s all about, after all. It has nothing to do with marketing whiskey … we’re after flavor,” Reynier said. “The fundamental aim of our ongoing collection of projects is to create our own Waterford barley variety, adapted to our terroirs, and for maximum flavors … that’s the main goal. Flavor from barley … which has pretty much been neglected for the past five decades. We’re making up for lost time.”

33
Shares
1.3k
Views
Share on FacebookShare on TwitterGet Our Newsletter
Get The Glenlivet 18 Year Old at ReserveBar. Shop now!