Once upon a time, Campbeltown was one of the busiest whisky producing cities in Scotland, with over thirty distilleries. In fact, a few Lord Provosts of yesteryear proclaimed it “the whisky capital of the world.”

If quality were the deciding factor, then Campbeltown might still deserve that illustrious moniker, even with only a handful of distilleries operating in 2016. Why is that you ask? Because Springbank distillery is still located there, producing extraordinary whisky at surprisingly affordable prices.

The eighteen year-old is Springbank’s best known gem in its OB range. Many an afficionado has found both solace and joy in a glass of the legendary broth. Yes, the Springer 21 year-old radiates more mystique, perhaps–and costs a good deal more. However, in my estimation, the 18 year-old is often better than its older sibling, which can seem a little washed out, depending upon the batch.

As for single cask bottlings, I will let you take a walk down memory lane and read a couple of reviews that I’ve penned about some real doozies. Yes, single casks always cost more, and these days the prices can be fairly imposing, especially for bottles over 18 years of age. Sometimes, however, paying the extra scratch is worth every penny. [Sigh]

Dreaming about rare Springbanks can be fun, but the official bottling on my desk is getting impatient. What say we uncork this Springbank 18 Year Old, and give the whisky a go go? I attempted to pinpoint the year it was bottled, but there is no stamp on the inside of the front label. It’s not terribly recent, judging by the faded purple “S” on the label. My best guess is circa 2013. 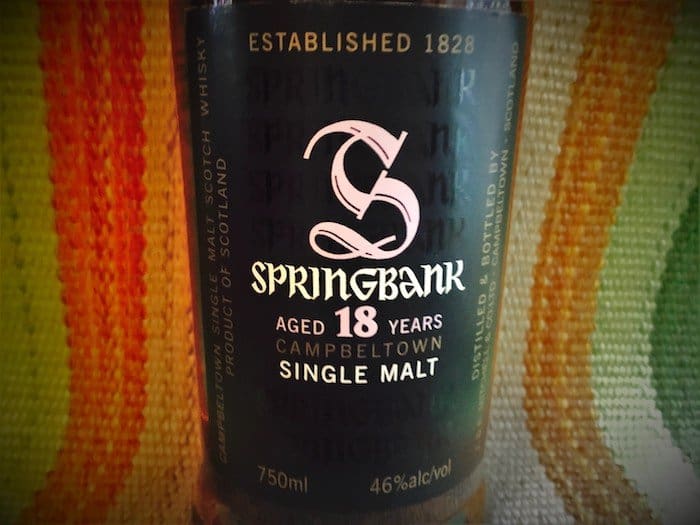 Nose: Time in the glass is a must, especially if your bottle is recently opened (as mine happens to be). After five minutes of rest, I’m getting a delicate balance of minerality and berry fruits. I feel like I’m nosing a 10 Year Old Springbank on steroids. Ha! Happy, happy, joy, joy. This baby has the visceral impact of a ten year-old, but the depth and complexity of nearly twice that long in casks. Mark my words, that’s a rare combination.

Vanilla almond milk rises up from my glass, along with strawberry, and a peck of acai. As is usually the case with good Springers, the eau de toilette of a dunnage warehouse is not far behind; its atmosphere is dank, damp, and delightful. Musty-fustiness brings with it the faintest hint of motor oil. There’s also wet flannel, and a savory note haunting the background like a ghost. What is it? Let me take another sip to focus on this note. Interesting. I’m reminded of a cast iron pan that has recently cooked bacon and eggs.

Palate: Antique leather is first to touch the lips, along with a barnyardy note that reminds me of wet clay tilth, hay, and a pasture of cows. Does this mean I’m saying the whisky tastes like meadow muffins? No, of course not. We’re talking the scent of pasture lands by the ocean. Salty marine air nipping at your nose. There’s also a wisp of peat smoke, added for good measure. On the sweet side, I’m getting caramel, vanilla, and short bread.

And then there’s that illusive ghost note that seems to have gone from savory on the nose, to umami in the mouth. It conjures up the memory of a deep fried enoki mushroom dish that is served at a Chinese restaurant in my neighborhood. For those of you who’ve tasted Springbank’s 12 Year Old Cask Strength, Batch 12, the “ghost note” of which I speak is also present in that bottle. However, in Batch 12, the note is far and away more prominent.

Excuse me for saying so, but this palate keeps going and going, the longer I sip. Now I’m getting cherry. But not like what you tend to taste in most bourbons. No, the note is of fresh cherries rather than preserved. Quite a nice final act. As for the finish, it’s fairly long, winking out on a sweet, though fusty, note, along with oak tannin, smoke, and Mexican chocolate embracing at the death.

Ten years ago, many critics panned over Springbanks quite shamefully. The distillery was not on the whisky radar, so to speak. Today, it's a very different story.

Critics in 2017 realize that the distillery's quality and charm have been holding their own, down through the decades, even while other multinationally-owned warehouses at other distilleries are moving swiftly towards NAS releases, as well as releases with less robust, organic "old skool" character. I suspect that this is a part of the reason that Springbank whiskies, in general, have become more expensive these days, even while they are gaining leaps and bounds in popularity among critics and drinkers alike.

The asking price in the State of Oregon for a bottle of Springbank 18 Year Old OB is an obscene $245.95. Oregon, by the way, is the second highest in the United States insofar as liquor taxation is concerned. And when it comes to the acquisition of Springbank products, the OLCC certainly isn't putting any pressure on its distributor to be nationally competitive, either. Nope, OLCC buyers always seem to nod at whatever price is offered, without question, and then sleepily forward the (lack of) savings to consumers.

At any rate, this one's a keeper. If you can find a bottle of Springer 18 for under $190, then it's worth splurging for a chance to taste the legendary broth of Hedley "Big Head" Wright. Who's that you ask? Why, the Chairman of Springbank distillery, that's who. Not only is the man's physical head a tad on the large side, his knowledge of the whisky industry is truly prodigious.