Upon first setting my eyes on this bottle, I first wondered about the odd moniker. Could FEW be the surname of a whiskey pioneer, the founding distiller who worked tirelessly to overturn Evanston’s post-prohibition dry laws, or maybe an acronym for something-something-whisky? It is an acronym, as it turns out, but it’s a tongue-in-cheek one: it’s named for the famous temperance advocate Frances Elizabeth Willard.

But “FEW” also does double-duty to bring an air of exclusivity to this small-batch product. According to the Illinois distillery, “in a world chock-full of mass-produced spirits, only FEW remain truly handcrafted, and small-batched.” It seems like beverage experts enjoy such things, as FEW has recently been named one of the 12 best single malt distillers in America.

The product itself is born with a bit of an American twist despite its traditional U.K. inspiration. FEW’s single malt whisky is crafted using 100% malted barley, which consists of both unsmoked and cherrywood-smoked malts. The finished product, according to the distillery, is aged at least one year in used cooperage (in this case, FEW’s custom-made rye & bourbon oak barrels which come from an award-winning cooper in Minnesota.) This particular product is ultimately born under heavy Scottish influence, in both its use of 100% barley and used Bourbon barrels for aging and finishing.

This whisky provides a really fun single malt experience, one which is a little tamer in its smokiness and approachable to those who typically imbibe bourbons and American whiskeys. 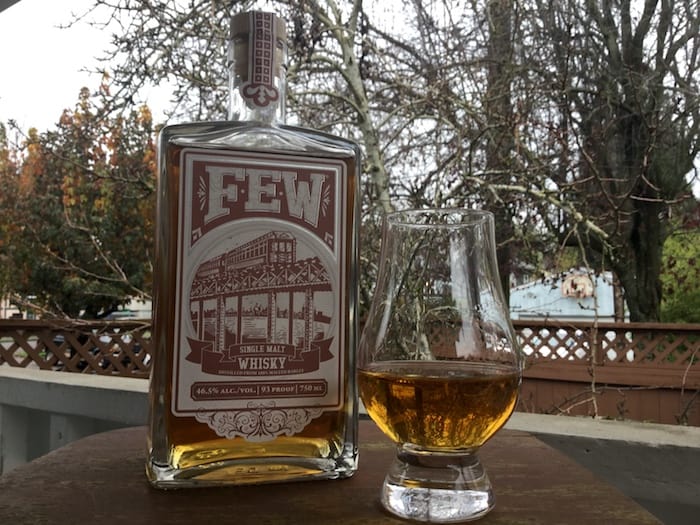 Appearance: The whisky pours the color of toasted straw with a pronounced dullness throughout the glass which fades to a pallid shade of beige around the edges. Legs are present and quite speedy.

Nose: That neutral woody nose reminiscent of particle board leaps out from the first sniff of this whisky. Notes of vanilla creep up to help support the burly oak profile. An air of fresh-baked buttery pastry is weaved throughout multiple inhalations, and there is a finishing note of fresh-cut grass that stimulates the palate with a green freshness. I was hoping for a bit more smoke in the nose, but the cohesive nature of the aromatic experience gives thanks for balance regardless.

Palate: As soon as this golden liquid hits the tongue, a perceptible balance between viscosity and alcohol burn sets the stage for an intense experience. The ‘green’ element noticed earlier in the nose translates wonderfully in to a leafy, earthy, rind-y mouthfeel which is complimented by a caramel sweetness that also allows the slow burn of 46.5% alcohol to be spread out and tamed.

The cherrywood starts to emerge as my palate acclimates to the more intense profile, bringing more of a peat-like astringency than a traditional BBQ-type smoke. Flavors of treacle and Szechuan peppercorn appear in the finish and add a wandering complexity.

With the exception of the domination of oak in the aroma, this is a pretty well-put-together whisky, a Scottish-influenced single malt with built-in approachability for the American palate. FEW Spirits Single Malt is a fun sipper and keeps me coming back for new flavors and that warm feeling. Even at one year in oak, the cohesive nature of this product is impressive, which has me curious to try their rye.