Editor’s Note: These whiskies were provided to us as review samples by Bruichladdich. This in no way, per our editorial policies, influenced the final outcome of this review.

Scotland’s Bruichladdich Distillery was revived in the early 2000s when a group of private investors purchased it and let Jim McEwan and Mark Reynier give it a new life. Originally built in 1881, it proudly operates with much of its original equipment, including its tall stills that run at a reported trickling rate. The distillery, now owned by Remy Cointreau, also makes The Botanist Gin, Octomore and Bruichladdich.

The distillery is run by a group of entrepreneurs who wanted to make Scotch whisky that is more true to the island of Islay. The Port Charlotte line has 40ppm phenol content, is made with 42% Islay grown barley (the rest is from Scotland mainland) and is aged and bottled on the island. The distillery, as a result, is now the largest private employer on Islay. There are rumors they intend to start malting their own grain (a rarity and a challenge for distilleries with the modern market demand), but for now they rely on Bairds of Inverness.

The Port Charlotte brand is named for a neighboring town and is representative of the growth of the company. A new, heavy dark green bottle warns of the high peat content and 100-proof spirit. With several awards under belt, the company boasts proud claims of authenticity and doing things the hard way. They go as far to say, “Port Charlotte Single Malt is the antidote to convenience and market manipulation.” I admire this approach – it is bold and iconic, a real boom or bust mentality. A modern feeling is intertwined with a tribute to heritage. Based on the growing popularity of the brand and continued new releases and growth, I’d say they are doing things rather well. Let’s see how it tastes! 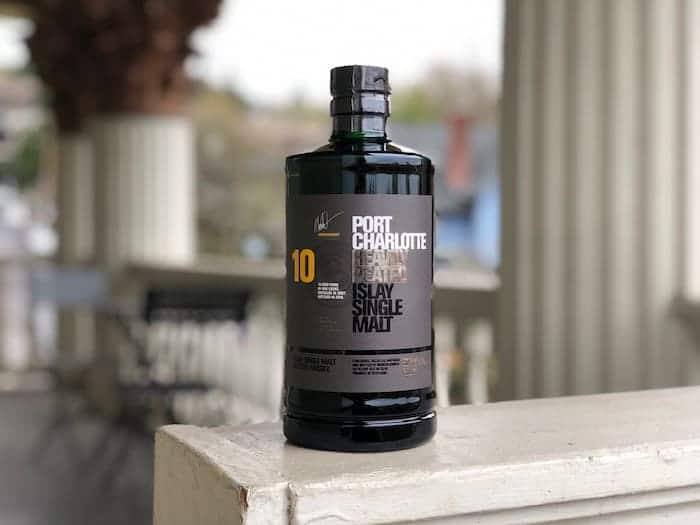 Nose: Dry aged beef, buttered croissant, and honeysuckle. Citrus is balanced with herb, and the sea influence is balanced with a velvety depth. Invitingly peaty, balanced and surprisingly approachable.

Palate: Bits of vanilla, honey, spice and other wood influence. Heavy and oily base balanced by lemon, peach and rosemary. Salinity and iodine make your mouth water as the alcohol dissipates nicely to reveal a good tannin structure and notes of white chocolate and mint. Medium finish that leaves peat and wood behind.

Final Thoughts: An absolute beautiful expression of single malt Scotch, it leaves you guessing what a 16 or 20 year version may taste like. The balance is what really stands out. By balance, I mean that the ‘heavily peated’ aspect supplies a wonderful backbone without covering up other nuances and base personality. This is very high up there for a 10 year peated Scotch.

Vital Stats: 100 proof, distilled from barley harvested on three Islay farms in 2011 and distilled that same year, un-chill filtered, peated to 40ppm, $60 for a 750mL.

Palate: Chewy and pleasant from the first sip. Well balanced, as citrus tones mix with ritz crackers, anchovies, beeswax and toasted wood. Malted chocolate shake, coating your teeth as it dries your mouth and leaves you thirsty for more.  Pleasantly long finish that brings a sea front view to your imagination.

Final Thoughts: Extremely well balanced for a heavily peated, non-age statement scotch. Pleasant all the way through. A bit intriguing in the how it lightly dances on your palate while delivering complexity and Scottish terroir. You can taste the quality and patience that makes it special, and you can easily imagine yourself on Islay drinking it by a cold rainy bay not far from where the barley itself was grown. Impressive, and definitely something worth trying for it’s backstory and for the taste itself.