Editor’s Note: This whisky was provided to us as a review sample by Rampur. This in no way, per our editorial policies, influenced the final outcome of this review.

Whisky is made in India. Not entirely expected, but not a huge surprise. Even as a whisky or whiskey enthusiast, I have a lot to learn and explore. Here, we have Rampur distillery which began in 1943 and has been producing a variety of spirits such as rum, vodka, and brandy. At the helm of Rampur is Radico Khaitan and they are leaping into the foray of whisky. The particular whisky in question for this review is their Indian Select Single Malt, a welcome addition to the tasting palate.

Rampur sits in the Uttar Pradesh region in Northern India and is the oldest distillery in the country. As far as designations go, Rampur is self-labeled as a Himalayan Single Malt whisky. Though there is no age statement, the region is prone to high temperatures, and is thus said to speed up the aging process in oak. Other whisky selections that are available from Rampur include a Signature Reserve, Double Cask and a PX Sherry finished.

Competing with Rampur is Amrut and Paul John single malt whiskys. Amrut is said to be the very first to make whisky in India, dating back to 2004 for their first release and has thus explored several expressions. Paul John has quite the portfolio of whisky single malts as well. Their flagship bottle is the Brilliance, followed by peated and oloroso sherry finished whiskys. Rampur first began distilling their malt whisky in 2004 and released their first single malt in 2016.

What does Rampur have to say about their process?

“Rampur is an Indian Single Malt Whisky, hand-crafted and aged in the foothills of the Himalayas. The Himalayas provide polar opposite of climate conditions throughout the year with the flavour of the famous Indian Summer giving Rampur an added dimension and depth.” 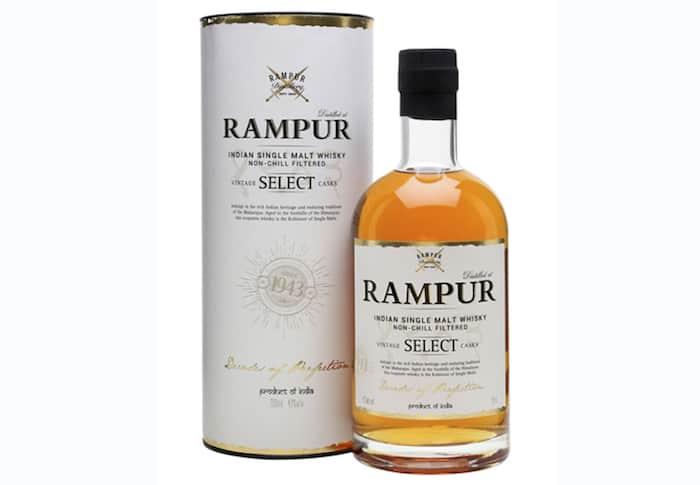 Palate: Medium bodied, honey, oak, and a hint of eucalyptus. Definitely get that orchard fruit sweetness up front and then leads into some of the more floral notes. Not super complex, but also doesn’t need to be.

I had no idea what to expect from this one. I found the Rampur Select to be a balanced and tasty whisky. Definitely curious as to the age, given what they say about the climate of the region. Given the color, one might guess somewhere between the eight to ten year range. As a reference, the closest flavor profile would be along the lines of a Japanese whisky. It's a win and would certainly be interested in tasting other expressions from Rampur.