Editor’s Note: This whisky was provided to us as a review sample by John Distilleries. This in no way, per our editorial policies, influenced the final outcome of this review. It should also be noted that by clicking the buy link towards the bottom of this review our site receives a small referral payment which helps to support, but not influence, our editorial and other costs.

John Distilleries produces the sixth largest whisky brand in the world. Founded in 1996, they sell more than 15 million cases of whisky every year. If you’ve never heard of their Indian Single Malt it’s probably because it hasn’t been distributed in the United States until recently. Now, there’s several to choose from that capture the essence and hues of India.

Paul John Distillery is located in Goa, India on the western coastline where the smell of spice meets the sea. The climate here is quite warm which helps speed up the maturation time of the whisky. A five year whisky from India could match the maturity of a 10 year whisky from Scotland because of this warm climate.

Every year, Paul John Distillery comes out with several different whiskies including some limited editions or as they like to call them, “rarities”. One of those rare whiskies is out now, just in time to spice up your holidays. The Paul John Christmas Edition 2020 will only be available for a short amount of time due to the limited quantity produced and bottled. 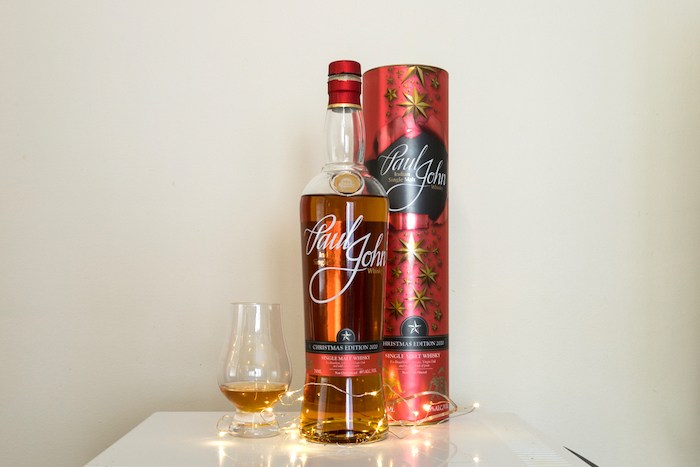 Nose: The most prominent notes were lacquer, peat, and oak with slight cherry and green apple accents.

Palate: It’s an overall earthy whisky, from cedar to oak. The flavors were peat, tobacco, leather, moss, and campfire. It was also slightly rubbery with orange peel and warming spices.

Labeled as "lightly peated" I do believe the peat comes through. There's definitely campfire and smoke. I also felt an afterburn in my mouth, mostly on the center of my tongue, and lips. Perhaps it was a bit of the warming spices but I also think it was the leather and peat. The mouthfeel was medium and a bit oily.

Christmas Edition 2020 was very earthy with a bit or lacquer and nail polish. If you like, woodsy, earthy, leather or a light Islay whisky, this one's for you. I'm curious what Paul John's other bottles offer as far as flavors. There's a full line up to choose from!