Editor’s Note: This whiskey was provided to us as a review sample by Paul John Dstillery. This in no way, per our editorial policies, influenced the final outcome of this review. It should also be noted that by clicking the buy link towards the bottom of this review our site receives a small referral payment which helps to support, but not influence, our editorial and other costs.

This year Mithuna by Paul John was named the third best whisky in the world by “Jim Murray’s Whisky Bible 2021.” Of the distinct honor, chairman and managing director Paul P. John was over the moon. “For our whisky to be declared the world’s 3rd finest whisky in the world is perhaps the greatest achievement a whisky maker could possibly dream of and this speaks especially of the passion and dedication of our Master Distiller, Michael D’Souza.”

John Distilleries operates its primary distillery, Paul John Distillery, a malt plant, out of Goa. The distillery is set up to produce 6,000 liters a day from their Indian-made copper pot stills. Located on the southwestern coast of India, Goa is immersed in tropical heat that increases the whisky’s alcohol content during the aging process.

Unpeated and non-chill filtered, Mithuna by Paul John is distinguished from other single malts due to Master Distiller D’Souza’s choice to utilize Indian ingredients. The whisky is matured in American virgin oak casks and is high proof without being overpowering. The barley for Paul John Distillery’s single malt output comes from the foot of the Himalayas from farmers who grow six-row barley. This is significant, as the six-row contains more enzymes and proteins while yielding less alcohol during fermentation.

D’Souza chose to skip chill filtration for his single malt whisky, because he feels it can remove aspects of the genuine flavor and aroma. The result for Mithuna by Paul John is a resplendent mellow whisky, sophisticated in flavor with subtle spice. 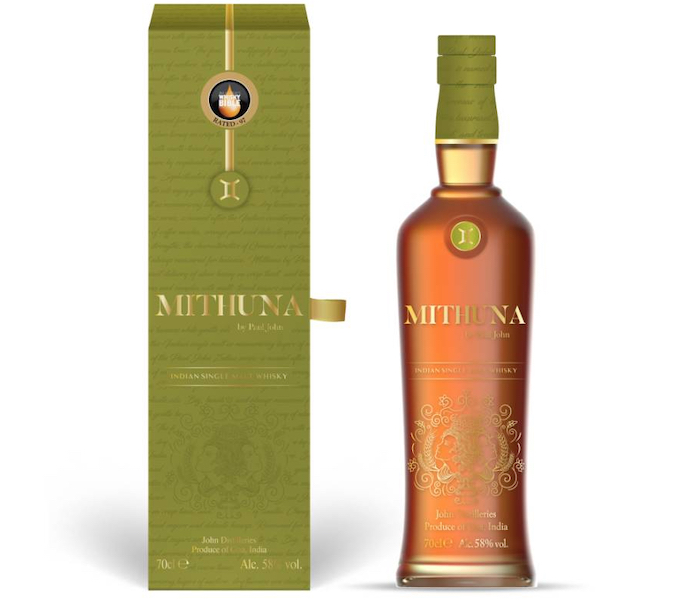 Nose: Floral elements come through on a wave of persimmon and honey.

Palate: The taste of fall, citrus peel, and cumin seed are carried on the lingering mellow heat. The whisky has a chewy mouthfeel and a delectable long finish, sweet and oaky.

One of my favorite tastings in a long time, Mithurna by Paul John is a special occasion spirit. It is on the expensive side, but there is a complexity of flavors that elevate the whisky from an ordinary tasting to a unique one.