Editor’s Note: This whiskey was provided to us as a review sample by M&H Distillery. This in no way, per our editorial policies, influenced the final outcome of this review. It should also be noted that by clicking the buy link towards the bottom of this review our site receives a small referral payment which helps to support, but not influence, our editorial and other costs.

Pomegranate. The ruby jeweled, seeded fruit has played a role in many cultures since the beginning of creation. Persephone sealed her fate to spend her life between the underworld and Olympus by eating just six seeds. According to some scholars, the forbidden fruit Eve ate in the Garden of Eden is most likely a pomegranate. In Judaism, the pomegranate is a significant symbol because of its relationship to the Torah. They believe pomegranates contain 613 seeds, which corresponds to the number of mitzvot, or commandments, and therefore represent righteousness.

M&H Whisky Distillery in Tel Aviv recently released a single malt finished in fortified pomegranate wine casks for their Apex line. Making pomegranate wine is a delicate process. Those rubies filled with seeds have to be pressed carefully so as not to release the bitterness they hold. In 2003, the Nahmias brothers at Rimon Winery finally developed a new strain of pomegranates that are sweeter and deeper in color after years of experimentation. Sweeter pomegranates reduce the amount of added sugar necessary to catalyze fermentation.

While M&H does not specify where they get their pomegranate wine casks, it does not matter in the grand scheme of things. The whisky M&H produces is a win for the whole country of Israel. The distillery pushes for regulation standards regarding Israeli whisky. “We want top-quality whisky all around Israel, not just for M&H,” he says. “Israeli whisky needs to be well-known for its quality, it doesn’t matter which brand. But there’s enough room in the market for everyone.” 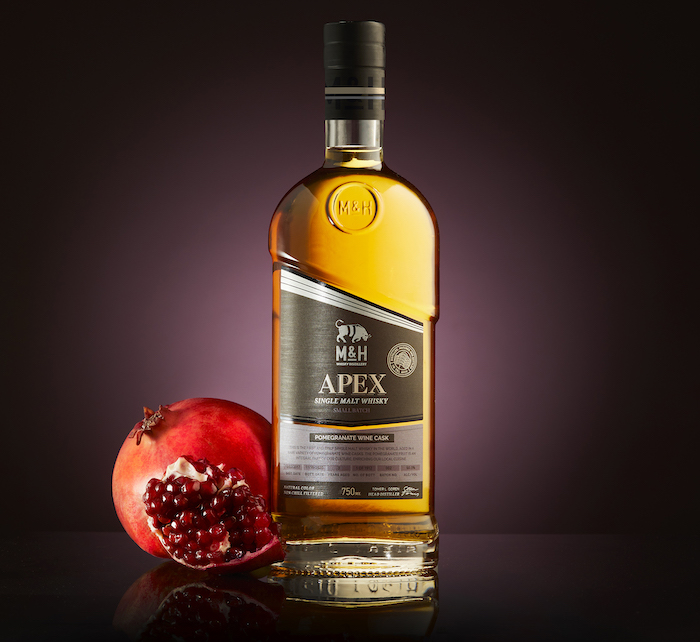 Nose: A quick whiff of acetone greets the nostrils, then dissipates. Pomegranate and dried cranberry nestle at the top of the dram. Brown sugar adds a touch of syrupy sweetness. There is the faint aroma of cinnamon lingering in the background.

Palate: The whisky is sweet with honey but fruity with pomegranate. It reminds me of cough syrup my mother would force me to take as a kid. The grain comes through like bran muffin. The cinnamon from the nose is light, but nutmeg comes through more boldly. The finish is hot with leather.

For the first single malt finished in fortified pomegranate casks, I was excited about something new and unique. The nose was so sweet, I expected a dessert wine. Instead, my palate could not handle the fruitiness mixed with grain. The whisky just reminded me of cough syrup. Such a shame, but I hope someone else will enjoy this particular whisky.