Editor’s Note: This whisky was provided to us as a review sample by Loch Lomond Group. This in no way, per our editorial policies, influenced the final outcome of this review.

The Littlemill Distillery closed permanently in 1994. Then, in 2004, its buildings were destroyed in a fire. So it’s a silent distillery not once, but twice over—and unlike Port Ellen or Brora, it appears there’s no coming back from the dead in Littlemill’s future.

That’s why I was so excited to see a sample of Littlemill come in. I’ve tasted Littlemill before, but the whisky I tried was a humble airplane-sized bottle of entry-level single malt—and Littlemill 40-Year-Old Celestial Edition is something else altogether.

Littlemill was a Lowland distillery, and before its closure was often cited as the oldest continually operating producer in Scotland. Permitted whisky distillation at Littlemill dates back to 1772, three years before the now-oldest Glenturret Distillery’s opening date of 1775.

Notable events during Littlemill’s 200+ years of operation include being one of the first Scottish distilleries to have a woman licensee (Jane MacGregor, 1823); switching from triple to double distillation in the 1930s; and pioneering a new type of still designed to make various styles on a single piece of equipment. That configuration is now called the “Lomond still” in Scotland, because one is still in use at the Loch Lomond distillery.

Now, back to this Littlemill 40-Year-Old Celestial Edition. This 40-year-old single malt was released by the Loch Lomond Group to honor Duncan Thomas, the former owner of Littlemill and the gentleman responsible for introducing that distinctive still in the first place. The whisky was aged in American oak and ex-bourbon barrels, then briefly finished in Oloroso casks. Just 250 bottles will be available worldwide. It’s available through specialty stores and travel retail channels, including shops at Heathrow, Glasgow, Edinburgh, and Aberdeen international airports.

Littlemill 40-Year-Old Celestial Edition may not have come from outer space, but its price tag will surely send your blood pressure rocketing skywards. MSRP on this exceptionally rare whisky is £6,000, or about $7,800.  That luxury positioning is underscored by its packaging, a snow-white presentation box. Inside, the lining is printed with a map of the stars from the sky above the former Littlemill Distillery the night the whisky was bottled.

The whisky comes packaged in a hand-faceted Glencairn decanter stopped with solid brass and identified with a unique bottle number. Continuing a recent trend in collectible releases, it comes with a 5-cl “sidecar” of the liquid so purchasers can actually taste the stuff before tucking the bottle away into their collections. Here’s what will be in their glass. 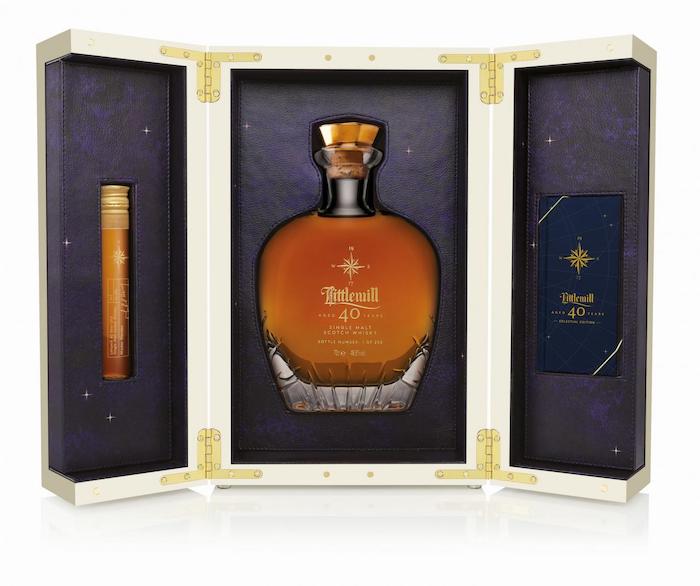 Palate: Contiguous with the nose. There’s cooked fruit, gentle spices, and plenty of dried fruits and nuts along with a more unusual savory component—fruity Kalamata olives? The finish is dry and leathery, with plenty of oak spice and sandalwood, although white peach, nectarine, and currant occasionally rise to the surface like the silvery flash of a trout’s underbelly in a stream.

Beautiful evolved, and elegant—much as every 40-year-old hopes to be described, human or whisky alike. This is a lovely whisky, and purchasers will surely enjoy their 5cl sampling before hiding the bottle away on the highest shelf and calling their insurance provider to update their policies.