The long shuttered Port Ellen Scotch whisky distillery on Scotland’s island of Islay is set to get a glorious makeover that will bring this facility to modern day distilling standards while at the same time paying homage to its historical traditions. This is all the hope, any how, of spirits giant Diageo, as they recently revealed to the Islay community their revival plans.

The Port Ellen distillery, as we reported back in late 2017, is part of an over $46 million USD push to bring both this operation and also the fabled Brora distillery back online. Specific to Port Ellen, one has to first go through a quick history lesson to understand what will need to happen in this case to get things up and running again. The buildings at Port Ellen, it is said, “have gone through many changes since it first opened in 1824, with the distillery closing and largely being demolished in the 1930s, before being rebuilt in the 1960s.

“Following its most recent closlure in 1983 only the kiln building with its classic pagoda roofs and the traditional sea-front warehouses have survived. These buildings will be restored as integral parts of the revived distillery, with a beautiful new stillhouse created to house distillation.” 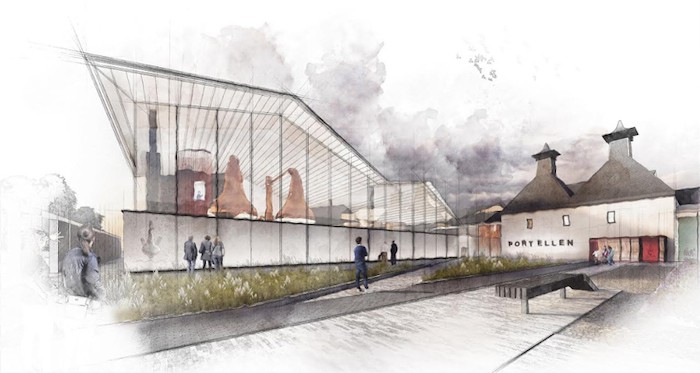 A conceptual drawing of Port Ellen (image via Diageo)

Under the newly proposed distilling plans, “Port Ellen will be brought back into production with a combination of two pairs of copper pot stills and two separate distillation regimes in an innovative combination of tradition and experimentation.

“The primary distillation regime, using two stills that will exactly replicate the original Port Ellen copper pot stills, will carefully recreate the original spirit character of the distillery that made its single malt Scotch Whisky amongst the most sought-after in the world. Alongside this will be a second, smaller pair of stills that will produce alternative spirit characters, allowing the Port Ellen whisky makers the freedom to experiment with new whisky styles.”

“These plans are any whisky maker’s dream come true,” said Georgie Crawford, the Diageo master distiller who is leading the Port Ellen project, in a prepared statement. “To have the opportunity to recreate the original spirit character of Port Ellen distillery so we have new generations of that classic Islay peated malt is incredible, but then to combine that with the freedom to experiment with new variations is truly extraordinary.

“Like the whisky, the plans for the building combine the best of heritage and innovation. The buildings at Port Ellen distillery have changed and evolved many times over its lifetime. We’re lucky enough to have the old kiln buildings and seaside warehouses that will be restored and reimagined, alongside spacious and modern light-filled new buildings to house the distillery production.

“We believe these plans are a fitting tribute to the exceptional legacy of Port Ellen and we are incredibly excited to be able to share them.”

If all goes according to schedule, the plans will be formally submitted for approval by local government later this year. Subject to planning permission and regulatory consents, detailed design, construction and commissioning work, it is expected the distillery will be in production by 2020.

179
Shares
1.5k
Views
Share on FacebookShare on TwitterGet Our Newsletter
Get The Glenlivet 18 Year Old at ReserveBar. Shop now!