Editor’s Note: This whisky was provided to us as a review sample by Jura Distillery. This in no way, per our editorial policies, influenced the final outcome of this review. It should also be noted that by clicking the buy link towards the bottom of this review our site receives a small referral payment which helps to support, but not influence, our editorial and other costs.

While the Isle Of Jura may be only a five-minute ferry ride away from Islay, and be relatively the same size in acreage, it has a much smaller population of both humans and whisky distilleries. Islay is well known for its history of distilling. There were once as many as 23 operating distilleries on the island (currently there are nine, with plans in the works for two more).

The Isle Of Jura is also known for The Paps of Jura, and as being the location where George Orwell escaped the noise and distraction to finish his classic dystopian novel 1984.

I find it to be an interesting parallel between Orwell needing solitude and isolation to be able  to complete his novel and the recent isolation some of us felt during the pandemic. I really appreciate hearing how friends and colleagues adjusted to the lock-down by trying to utilize the time at home to learn and do new things. I heard of languages being learned, podcast starting, and pets being adopted among many other skills and interests.

I, myself, began writing whisky reviews. So let’s get to it.

Jura 12 Year Old was part of a rebooting and launch of what the distillery refers to as their Signature Series. The beginning of 2021 saw the expression being welcomed into the U.S. market.

Jura Distillery is known for having some of the tallest stills in Scotland. The 12 year old spends its time maturing in ex-bourbon barrels, and is then finished in Oloroso sherry casks. This is a tried and true method that should result in a dram that is “Doubleplusgood.” 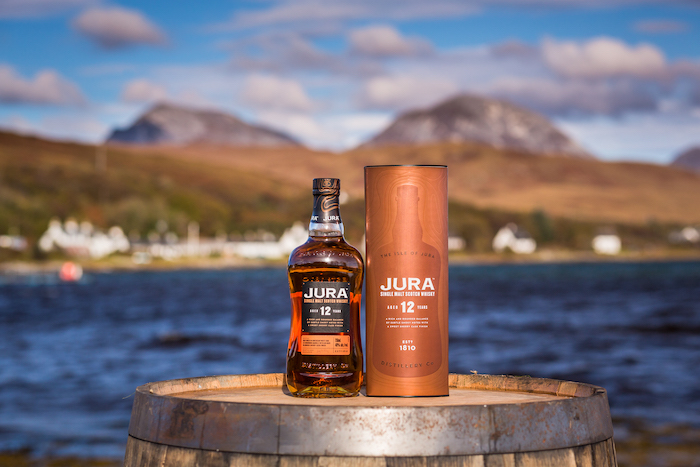 Appearance: Clear, but with a rich depth of body. Copper to tawny hued with clearly defined rivulets on the side of the tasting glass.

Palate: The promises of the aroma are fulfilled with  more developed tropical fruit and chocolate notes. The coffee characteristics balance out the slight sherry sweetness with a touch of bitter. The smoke only presents itself faintly during a medium finish

If I were to find myself stranded on a sparsely populated island with only some deer to keep me company, I sure hope it’s this one. This whisky really seems to capture the character of a place with a reasonable price. Now, all that is left to do is wait for inspiration to strike.