It is safe to say HBO’s “Game of Thrones” is a commercial juggernaut. HBO has announced GOT will be returning for its final season in April and in anticipation collaborated with Diageo to create an entirely new expression of Johnnie Walker. Comprised of single malts from Cardhu and Clynelish, they made sure to play up the “freezing” aspect as much as possible. The bottle is made with thermochromic ink, proudly states that it is chill filtered, and oddly, is recommended to be enjoyed directly from the freezer.

There are also eight other “Game of Thrones” single malts honoring the varying houses of the Seven Kingdoms and the Night’s Watch and my guess would be all of those are best enjoyed at room temperature.

The thermochromic ink changes the look of the entire bottle once below freezing. The ink on the bottle reacts to the cold temperature and reveals that “Winter is Here” on one side. Adorning the label of this limited release Johnnie Walker is Diageo’s depiction of the Night King (supreme leader of the White Walkers), whose eyes glow blue when the whisky is ready to be pulled from the freezer. This is a really neat effect I have never seen on a bottle before but considering both the nose and palate prefer room temperature for tasting it does make one skeptical up front. Nonetheless it is intriguing enough to try, especially if you enjoy “Game of Thrones.”

Chill filtration is normally an unnecessary intrusion on the flavor of one’s whiskey as it removes flavor compounds, but I can see why it would be deemed essential in this case since this whisky is pulled from the freezer. At cold temperatures whiskey that has not undergone chill filtration will become cloudy. When this happens, the whiskey is still the same as before, but some folks find it unsightly and therefore some distilleries undertake the process purely for cosmetic reasons.

Also, one last play on the “Game of Thrones” theme you can find on the bottle is where it states this whisky was blended & bottled “north of the wall.” I suppose this is technically true if said wall is Hadrian’s. Without further ado, here are some notes on this whisky at both freezing and room temperatures. 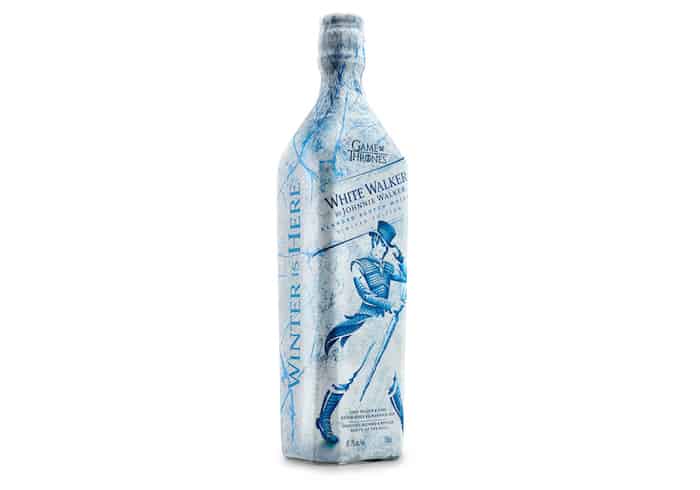 Nose: Subdued out of the freezer but has notes of caramel and spice. Berries and mango seem to pop in and out as the whisky slowly warms. Once fully warm the whisky reminds me of butterscotch milkshake with a caramel drizzle.

Palate: Finishes hotter than the low abv and freezing temperature would lead you to believe. Spice notes linger pleasantly, but not for long. Is more cinnamon sweet at freezing, but room temperature brings out LOTS of oak. This scotch tastes better while cold. It is true.

Any special release spirit associated with anything in film will always be at least somewhat gimmicky. In Johnnie Walker White Walker’s case, while there are some weird gimmicks like recommending it be drunk below freezing, Diageo at least put in the effort to create an entirely new expression. In the past they have not always done so. I

f you are a Johnnie Walker and/or “Game of Thrones” fan feel free to go ahead and pick up a bottle as it is inexpensive. I personally will be more excited to try the GOT Single Malt Collection, especially the Lagavulin for House Lannister and Royal Lochnagar for House Baratheon.