Editor’s Note: This whiskey was provided to us as a review sample by Johnnie Walker. This in no way, per our editorial policies, influenced the final outcome of this review. It should also be noted that by clicking the buy link towards the bottom of this review our site receives a small referral payment which helps to support, but not influence, our editorial and other costs.

Johnnie Walker needs no introduction. Their simple, colored labels and iconic “Striding Man” logo has appeared on bottles of whisky worldwide since well before most of us were born.

The brand traces its origins to the Kilmarnock grocery shop opened by John Walker in 1820. While it was common for grocers to keep a stock of single malt whisky, Walker found that he could achieve more consistent quality through blending. A small grocer could even cater to customers’ specific tastes by blending batches to order. By the 1850s, Walker’s name was attached to a product with growing regional popularity. When John’s son Alexander inherited the business in 1857, whisky had become the core product and Alexander spent the better part of the next three decades transforming his father’s grocery business into a global spirits firm.

The 1860s were a great time to be in the whisk(e)y business. At the beginning of the decade, the legal prohibitions were relaxed on large scale blending of whiskies from various distilleries. This allowed for the growth of whiskey blending as it is known today. Additionally, the construction of railways across the Isles enabled the easy transportation of goods within Britain and granted small towns access to global ports. The fact that Johnnie Walker’s square bottle is easily recognizable on the shelf is a happy accident for their brand management team- the original intent of the design was to maximize the number of bottles which could fit into a freight car.

In the first decades of the 20th Century, John Walker’s grandsons acquired major distilleries across Scotland’s whisky producing regions. The first among these, Cardhu in 1893, supplied the backbone of the red, and black label blends which were introduced in 1909 with the striding man mascot still in use today. They joined their business with the Distiller’s Company in 1925, which was acquired by Guinness in 1986. In 1997, Guinness merged with Grand Metropolitan to form today’s global spirits giant Diageo who shuttered the Kilmarnock plant in 2012 to the protestations of the local residents and government.

But don’t let anyone tell you that an old dog can’t learn new tricks. Johnnie Walker is getting in on the rye-naissance in Scotland with the recent release of their High Rye Blended Scotch Whisky. While rye has long been a popular grain with North American whiskey makers, it is something of an oddity in Scotch. Especially at an assertive 60% of the mash bill. This is toned down somewhat by blending, notably with the Cardhu distillate that serves as the backbone of Johnnie Walker Black.

According to a prepared statement from master blender Jim Beveridge “Johnnie Walker High Rye Blended Scotch Whisky continues our tradition of pushing the boundaries for what a Scotch whisky can do… Our journey towards crafting something truly unique and fantastic was guided by Johnnie Walker Black Label and how flavors from rye whiskies present nicely in classic whisky cocktails. The tasting experience features familiar Johnnie Walker notes that are expressed and emphasized like nothing we’ve crafted before, perfectly complementing our existing portfolio of products.” This gives me the impression that the blenders envision their High Rye more as the foundation of a cocktail, but I will be sampling it neat. 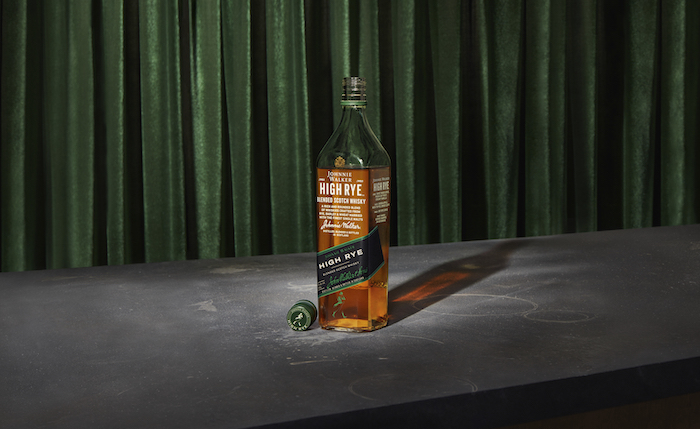 Vital Stats: No age statement but it is mentioned that the barrels are American oak. 90 proof. Average retail price of $36 for a standard 750ml bottle.

Nose: Big vanilla and pepper. The spice tingles the nose a bit but after that sensation wears off I catch a bit of fruit that I’m hesitantly describing as banana. I’m only hesitant because it smells like a real banana, sweet but also vaguely starchy, nothing like banana flavorings.

Palate: The rye is assertive with big pepper, clove, and allspice notes right at the outset. These fade off into a bright, juicy green apple sweetness which unexpectedly carries a faint hint of smoke that did not make itself known on the nose. A really nice touch I think.

The blending here is expertly done, capturing recognizable, complementary aspects of Scotch and rye whiskey styles. While I think there’s a fair bit to like in the glass served neat, I think I agree that this is most interesting as a cocktail ingredient. The blend is creative and the bottle is relatively inexpensive, so I see this as a fun whisky for the amateur mixologist to experiment with. The mix of Scotch and rye flavors gives this bottle a potentially broad “vocabulary” and I could see it adding a cool twist to an old fashioned, a Manhattan, a toddy, or a blood and sand.