Editor’s Note: This whisky was provided to us as a review sample by Hotaling & Co. This in no way, per our editorial policies, influenced the final outcome of this review.

Gooderham and Worts, one of the oldest whisky brands in Canada, began as a grain milling and shipping company in 1832.  They launched their whisky in 1837 and quickly became a best selling brand, at one point accounting for over a quarter of all alcohol production in Canada. The company was wildly profitable during Prohibition in the United States, at which time it purchased Hiram Walker, the makers of Canadian Club, and became one of the largest distilleries in the world.

The original distillery shuttered in 1990 as part of the “Distillery District” revamp in waterfront Toronto and its original space was remodeled into the Young Centre for the Performing Arts. Gooderham and Worts Four Grain Whisky is now being produced in Windsor, Ontario by Corby Spirits/Pernod Ricard, the makers of several other large Canadian whisky brands.

Gooderham and Worts Four Grain Whisky is a blended whisky, based on the historical style of the original. The four grain expression contains corn, barley, rye and wheat, all distilled separately in a combination of pot and column stills. The components are then aged in both virgin oak and ex-bourbon barrels before blending. The final blend is bottled at 44.4%, a higher proof than is typical of Canadian whisky, to emphasize the woodier characteristics.

Having (unfortunately) never had the opportunity to try the original Gooderham & Worts whisky, I’ll have to take their word for it on how accurate their recreation is.  Nevertheless, I’m excited to evaluate it on a modern scale. 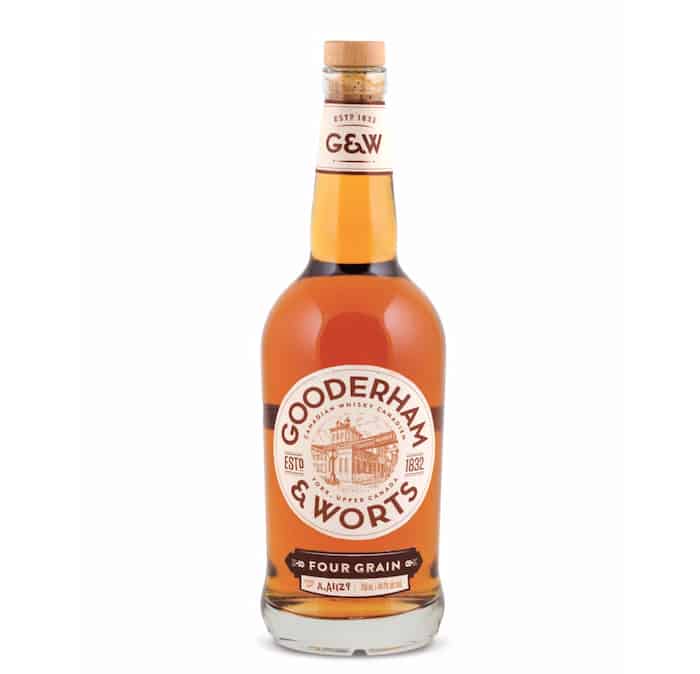 Nose: The nose is dominated by strong notes of licorice and cinnamon Red Hots, with some light brown sugar and baking spice tagging along.  Chewy caramel candy and a bit of eucalyptus and menthol present as well. There’s some moderate ethanol heat that almost comes across as punchy black tea.

Palate: Up front there are loads of rich brown sugar, green grains, cinnamon hard candies, and ginger snap cookies. It’s quite the confectionary roadshow, with peanut brittle and caramel corn off in the background. The mouthfeel is viscous and warming with low astringency, though the alcohol does make itself known. It’s rich and full in a way that is almost brash compared to most Canadian whiskys, with fine oak tannins keeping the sweetness in check and generous warming spices.

The finish is long, with green grasses, clove and cinnamon dominating and finishing pleasantly dry and oddly refreshing.

This is a delightful rye heavy whisky. The blend is thoughtfully put together and it does a great job of conveying the individual grain characteristics. The rye seemed to dominate but not in an overly aggressive way. It has many of the best aspects of rye dominated blends while still showing some of the sweetness and roundness that wheat and corn can bring. While some ambitious multigrain blends can fall short of the sum of their parts, this one easily exceeds it and does so at an accessible price point. I’d highly recommend this to fans of American rye and heartier Canadian whiskies such as Crown Royal Northern Harvest.

While I make no claims to the veracity of any comparison to 19th century Canadian whiskies, Gooderham & Worts Four Grain is certainly a Canadian whisky worth seeking out. At roughly $45 a bottle it’s a great value. Though billed as a historical expression, it comes across as distinctly modern in its thoughtful and well rounded composition and execution. Worth seeking out, either for those invested in the history of Canadian distilling or those seeking a spicy winter dram.