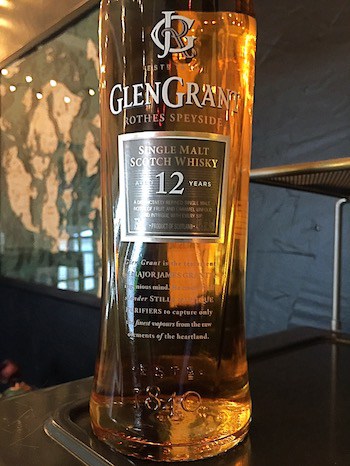 The town of Rothes in the Speyside region of Scotland is home to the distillery of Glen Grant. The operation produces and moves vast quantities of spirit under their own single malt label and independent bottlings, as well as being a key contributor to Chivas blends.

Glen Grant’s lineage stretches back to 1840, when brothers John and James Grant first applied for a distillery license, establishing the brand. A second Glen Grant distillery, appropriately named Glen Grant No. 2, was eventually established by Major James Grant Jr., only to have its doors close in 1902 after only five years of operation. Glen Grant No. 2 operated as Caperdonich when distilling recommenced in 1965 following more than six decades of disuse. Caperdonich was finally demolished in 2011 after being closed permanently in 2002. Today’s Glen Grant is once again a single distillery and an international whisky powerhouse, owned by Gruppo Campari since 2006.

The shape and size of Glen Grant’s eight stills play a key role in shaping the flavor profile of its whiskies. The four 15,100 liter wash stills and four 9,600 liter spirit stills feature pronounced wide bases combined with tall, narrow necks. Additionally, purifiers are utilized in both distillations. These features combine to yield a whisky that is known for its light and clean nature when compared to more robust malts.

Nose: Buttery, sweet, and fairly solventy. The nose presents quite young. Loads of malted barley up front with toffee, honeydew, and a slight hint of ash.

Glen Grant 12 Year Old is simple and easy. It’s a bit too easy in the sense that it tends to hover in an overpopulated segment of the single malt landscape. There isn’t much to clearly define the dram on its own. The word that most prominently comes to mind when sipping this is “competent.”

That is hardly a word that inspires me to reach for another glass right away. Glen Grant 12 Year Old works just fine as a simple sipper or easy mixer. To expect more is to invite disappointment.