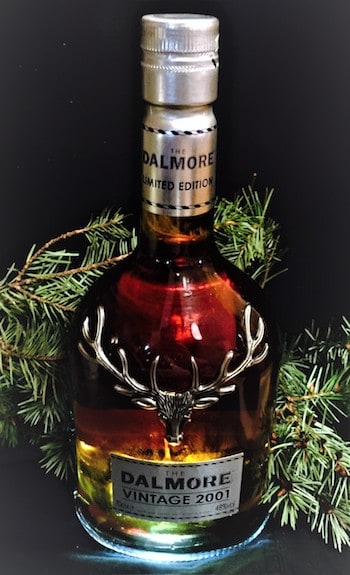 Dalmore is one of those distilleries with impeccable marketing and bottle design. The silver stag’s head emblem, which dresses up the bottle quite impressively, is taken from a legend in 1263 that happened in Dalmore (which means “big meadow”).

As the story goes, Colin of Kintail, Chief of Clan Mackenzie, saved King Alexander II of Scotland from being impaled on the horns of a charging stag. In fact, this 12-point stag emblem on the bottles actually has a name of its own: “Caberfiedh.”

The Dalmore Vintage 2001 displays Caberfiedh in all of his glory. I just love that. As for the whisky inside, it was aged for nine years in American white oak bourbon barrels. After this initial maturation, the spirit was finished for 15 months in sherry from Gonzalez Byass Bodega in Spain.

From what I gather, these casks were Oloroso, although this fact is hard to nail down. It’s been nearly six years since the whisky was released. Considering how production wasn’t terribly high, the cyber trail has gone dim. Despite the lack of available intel on this rather unique bottle, I did find out that Master Blender, Richard Paterson, himself, planned and supervised the entire maturation process. How cool is that? The author of the epic novel, Fall From Grace, also blends whisky. Er, wait a minute. That’s Richard Patterson with two “t’s.” Never mind.

One would naturally assume the sherry casks used were first-fill, judging by this whisky’s deep, brown color. However, based upon prior acquaintance with Dalmore expressions, I really can’t be sure about such an assumption.

Why’s that, you ask? Good question. Read on, and I will take a controversial position on a subject that most critics would rather not touch . . . for fear of becoming untouchable (pariahs, that is).

My experience with Dalmore goes back over the course of seven-odd years, when I tried three whiskies from the principle range. Needless to say, I was not overly impressed by what I found inside those rather handsome bottles.

One of the factors that turned me off was the fairly flagrant use of E150, a colorant. This figurative “fly in the ointment” is rumored to be tasteless, but my uncommonly sensitive nose and palate disagree. Because of this fact, I will go ahead and make the assertion that I have, in the past, tasted fairly excessive amounts of E150a in bottles of Dalmore that I purchased.

Why is this position controversial? First off, many whisky critics, and distillery reps alike, will adamantly assert that it is impossible to taste E150a because the substance is tasteless. My answer to them is simple: poppycock. E150a most certainly does have a flavor, and that flavor is pretty much awful, even though it is usually faint, but noticeable all the same: hovering in one’s bottle of whisky like a silent-but-deadly fart in a very large room.

The majority of the general public seems incapable of tasting E150a, but some of us can. Call it a blessing, and a curse. We “supertasters” have suffered through the occasional dram, and even the occasional bottle, of this artificial colorant that “set our teeth on edge.” Yuckety, yuck, yuck. There, I’ve had my say. Let’s press on, shall we, and see how the Vintage 2001 fares?

Appearance: Brown sherry, with runny legs in the glass, and rather small beads. The color is unusually dark, especially for a mere 15 months spent in sherry casks.

Palate: Dried grass; light roast coffee bean; caramel flavor sweetened with saccharine; milk chocolate; fruit cocktail syrup without the fruit; almond paste; under-ripe (tart) pear; surprisingly dry tannin presence from white oak bourbon barrels; and, last but not least, a very slight chemical bite, which is the gustatory equivalent of fingers on a chalk board to those who can detect it. Yes, I’m talking about E150a.

Finish: Peppery spice with more tannins. I would characterize this finish as medium in length, extended to some degree by the youthful exuberance of a ten year-old spirit.

In all fairness, I don’t detect the phantom signature of E150 as much as I did in past bottlings from The Dalmore. Knock on wood. All the same, this chemical does seem to be present in Vintage 2001. Not enough to ruin the bottle for me, however. There were some quiet and contemplative “malt moments.” Sipping and thinking is not a bad combination, even when it involves some whisky detective work. Yes, indeed. I enjoyed my syrupy-sweet dram more than I thought I would.

The Dalmore Vintage 2001 would make a fantastic gift for a person who appreciates the fine art of packaging and presentation. I double dog dare you to name one warm-blooded man on earth who could resist the Royal Stag of Caberfiedh, perching on a shelf in his liquor cabinet. It’s quite simply one of the finest bottle designs that I’ve ever seen.

Be this as it may, the Vintage 2001 is not the sort of gift one might gift to an aficionado of craft-oriented distilling. But, then again, how many die-hard single malt Scotch whisky aficionados are there in the world? We are the exception rather than the rule, and Dalmore seems to be banking on this fact.