Earlier this year Crown Royal unveiled a new limited release whisky they describe as being “infused with the smoky soul of locally sourced Texas mesquite wood.” While the initial thought is to take note how Diageo’s own words fail to include the words “barrel” or “smoked” and instead opt for the word “infused,” Crown Royal Texas Mesquite still piques the interest due to the uniqueness of the mesquite expression.

There are certainly several other whiskies out of the Southwest influencing their whiskey with mesquite, but Crown Royal Texas Mesquite will be most people’s chance to taste a whisky with mesquite wood qualities. As to why Crown Royal is releasing a whiskey seeming to pay homage to the Lone Star State, look no further than sales and also Canadian immigrants. Texas is, quite simply, one of Crown Royal’s largest markets.

This, in tandem with mesquite being recognized in the United States as representative of cuisine in the Southwest, especially Texas, Diageo thought they might test out the whiskey boom we are living in with a marriage of barbecue and whiskey. Native from central Mexico northward into the Great Plains and Nevada, mesquite is a legume with a plethora of uses. The wood produced by the different mesquite species can be notoriously twisted and is most famous for its various uses in the kitchen. Mesquite does have commercial appeal for furniture and other woodworking projects, and even formerly was used to pave roads in San Antonio, but that is largely regional to where mesquite grows wild.

The Canadians come into this unlikely marriage via an oil boom 60 years ago that saw our neighbors to the north move south en masse. They naturally brought along some comforts of home and this included Crown Royal whisky. 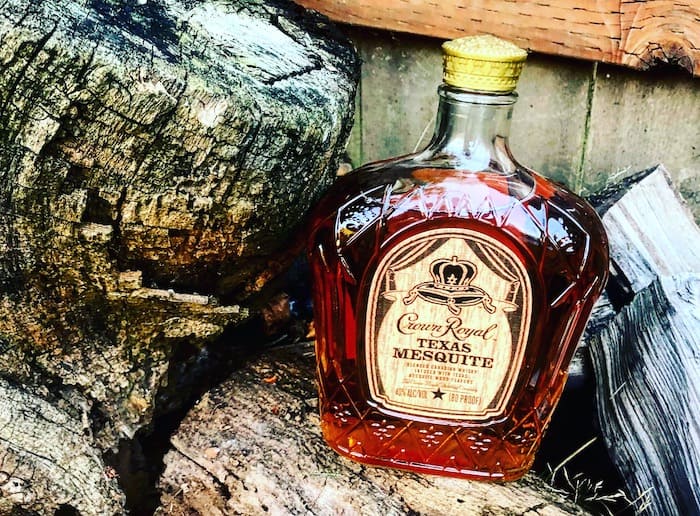 Nose: Fruity smoke emanating from a BBQ with a soft, subtle briney quality.

Palate: More brine and seaweed than the nose would have you anticipate, but also less sweet. Slightly creamy with a bit of sweet, smoky spice that lingers for a while on the finish.

Despite unanswered questions related to the word use “infused,” Crown Royal Texas Mesquite is whisky worth checking out. The flavor has an interesting fruity-smoked quality that could be a lot of fun to play around with in cocktails and its $25 price point fits that bill. The familiar Crown Royal bottle is dressed up with a neat wooden label.