Editor’s Note: This whiskey was provided to us as a review sample by Cascade Hollow/Diageo. This in no way, per our editorial policies, influenced the final outcome of this review. It should also be noted that by clicking the buy link towards the bottom of this review our site receives a small referral payment which helps to support, but not influence, our editorial and other costs.

Cascade Moon Edition No 1 is the first in a new series by Cascade Hollow Distilling Co. who you might know by the better name of George Dickel. Cascade Hallow is up to new and interesting things with this contemporary, yet traditional whiskey series. The Cascade Moon Whiskey series, as we recently covered during its launch, is “a brand new line of highly limited whiskies that are sure to be sought after by whisky fans around the country and pay homage to the distillery’s history while setting the tone for the future of the whisky category.”

Tennessee whiskey varies from Kentucky bourbon by location and the steps taken after distillation. Charcoal mellowing is the main difference. This is known as the Lincoln County Process, in which the distilled whiskey is filtered or steeped through vats of charcoal. Mostly, this charcoal is made with old sugar maple trees. At Cascade Hollow Distilling Co this process is done in open air, which is the old fashioned approach.

Just because Tennessee whiskey uses similar mash bills and techniques doesn’t mean the process to make the whiskey is the same. At George Dickel they believe that whiskey is better made in the winter months, which is where the term “Mellow as Moonlight” comes from. In the coldest months of the year the distilled whiskey is poured into large vats with sugar maple charcoal and allowed to mingle at 40 degrees before heading into the barrels.

Another way George Dickel sets itself apart is they believe the whiskey should all age at the same height so that temperature does not affect the taste. The whiskey warehouses are all one story instead of several like other Tennessee whiskey makers. They believe this leads to a more consistent, mellow flavor.

As for this particular first offering, Cascade Moon Edition No 1 s an 11 year old release. 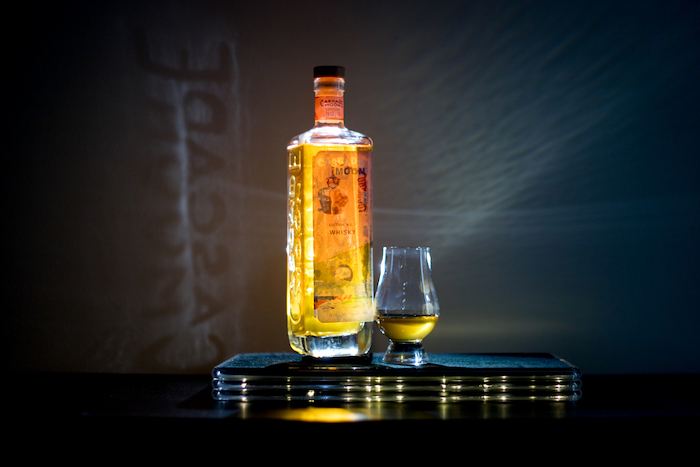 Vital Stats: 84 proof. Distilled and bottled by Cascade Hollow Distilling Co in Tullahoma, Tennessee. Home of George Dickel, which you might be more familiar with as a whiskey name. Limited quantities. 11 years old. Prices around $90.

Appearance: Burnished Copper. Thin, quick dripping fingers. The bottle is nice with the etching of “Cascade Moon” on the side and the wrap around label. It’s full of artistic whimsy.

Nose: Overall fruity and sweet with a hint of turpentine. Light and fruity like a honeydew melon. Sweet like a green apple.

Palate: It is an acidic tasting whiskey but it seems very balanced. There’s nothing too strong in the flavors that overpowers the rest. It’s a bit salty and malty. There is a slight maple opening. It’s pleasant but not a lot of flavors come through.

I'm a big fan of George Dickel whiskey, however, I wasn't totally over the moon for this one. Overall, Cascade Moon Edition No 1 is smooth but there's a small bite at the end. The flavors linger and are very balanced. It's not a roller coaster in your mouth. There is some heat that makes me think it's a higher proof than it actually is. I would say that makes it very alchohol forward. There's a hint of maple syrup, pine sap, and saline. It's a thin looking whisky as well as the mouthfeel.