There’s something nostalgic about blended Scotches. No longer particularly fashionable, they hint at a time when drinking was less complicated, when people were loyal to their brands, and when brands stuck to their guns, for better or worse, without resorting to annual NAS releases named after Greek gods or migratory bird species or the seven chakras.

But, of course, all things change—even blends. This one, Black Bottle, has a history that dates back to 1879, when it was created by Gordon Graham & Co., a company better known for blending tea. It was originally packaged in a dark, opaque glass bottle that gave the whisky its name, but the producers later switched to a green bottle, which stuck around for most of the brand’s history.

Over the years, Black Bottle changed hands several times, eventually ending up as part of the Highland Distillers Ltd. portfolio. Highland Distillers reformulated the blend to feature malt from all seven of Islay’s functioning distilleries, giving it a predictably peaty tang and generating a cult following. However, the brand eventually became part of the Burns Stewart Distillers portfolio, and in 2013 it was reformulated to return “to the original recipe and black glass bottle which Gordon Graham chose for his blend.”

Presumably, Gordon was working with a much less peat-forward palette, because the only Islay single malt retained today in the Black Bottle formula is Bunnahabhain. That’s in line with the sentiment expressed by the brand’s master blender Ian MacMillan, who claimed that “Black Bottle lost itself in Islay,” and championed a return to a richer flavor profile, to the chagrin of many peat heads. The new bottle is quite stylish, simultaneously current and retro, with a glossy gold label and a solid feel in the hand. But is the whisky inside still solid as well? 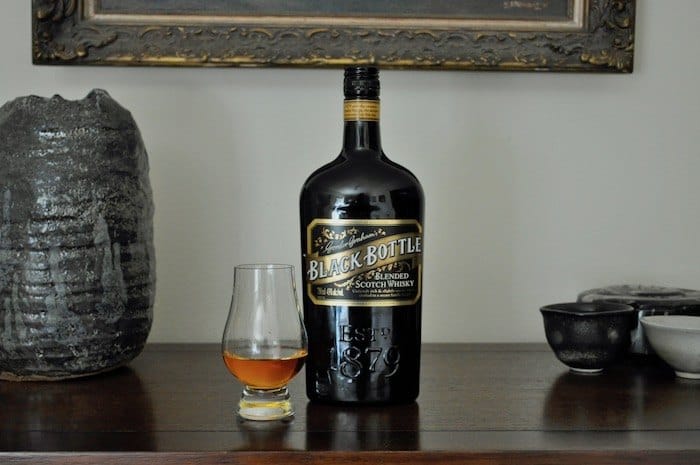 Nose: There’s something very humid in the nose, funky and feinty, with lots of wet cereal, old malt porridge, and damp cardboard. There’s also electrical tape, a ribbon of industrial smoke, bits of plastic here and there, and plenty of brash oak to boot. It’s clunky and a little indistinct, something like Cutty Sark Prohibition without the swagger.

Palate: On the palate, there’s fresh wort, maduro cigar, and deeply toasted whole wheat bread, plus a tantalizing herbal note in the finish that never quite manages to break through the low-hanging smog. It’s masculine and full-bodied, but again, there’s a kind of vagueness, a lack of clear perspective. On the bright side, it’s mercifully free of that cheap apple juice flavor that plagues many blends.

Black Bottle is no longer Islay-inspired, but it’s hard to say what it is inspired by. Is it smoky? Yes. Is it sweet? Yes. Is it spicy? Yes. Is it grainy? Yes. Too rugged to be a Dewar’s, it’s also too sweet-and-syrupy to be grouped with some of the more rugged blends like Teacher’s, that pugilistic low-end concoction that somehow manages to retain distinctiveness and charm.

But whatever it is, it’s not bad, just a bit confusing—and, of course, delivered in gorgeous packaging. A head-scratcher, but one I’m not sad to ponder again.