Editor’s Note: These whiskies were provided to us as review samples by BenRiach/Brown-Forman. This in no way, per our editorial policies, influenced the final outcome of this review. It should also be noted that by clicking the buy links in this article our site receives a small referral payment which helps to support, but not influence, our editorial and other costs.

Peat smoke is as classically – and importantly – Scotch as the very barley that it’s made from. Despite most of the single malt Scotch on the market today being unpeated, the smoky taste of peat is what many people associate with Scotch.

First and foremost, peat is organic matter that has decayed, degraded and been pressurized into solid layers within bogs. There are three peat levels in total, lightest at the top, becoming more solid and dense farther down. Peat is cut out in blocks and dried, then used as a fuel source for anything from heating to cooking to whisky-making.

Scotland, home of many bogs, has a great natural resource in peat. The initial use for peat in whisky was a practical one. After malting, barley needs to be dried before the next step.

This is where peat comes in. The peat is burned to create smoke underneath the malting floors to stop the germination. The influence of the smoke on the barley leaves that signature smokiness. Peat smoke was one of the only methods available to initial Scotch whisky makers.

The role of peat today is more about craft than necessity. Indirect heating is the main use of drying barley on the mainland. This method doesn’t leave any flavor in the barley. Despite newer technology over the decades, most of the isles, particularly Islay, have remained true to the practice of kilning with peat smoke.

Not all peat is the same. The organic matter that decays influences the type of peat, and thus the flavor of it. The isles, with Islay being the biggest and most prominent peat producer, tend to have more heather and low-lying plant life. This results in the biggest and boldest peat flavors.

Highland peat is lighter than its Islay counterpart. The region has more forests and consequently has peat made of tree roots and hardier plant life. Many peated whisky distillers, both within and without Scotland, source their peat from both regions for more available flavor profiles.

BenRiach only peats malt for a short period each year, in what they call “Smoke Season.” They source all of their peat from the Highland and Speyside regions. Their peated expressions consist of both peated and unpeated malt.

This smoky line tends a little sweeter than the average peated expression. This is due to both the Highland peat, and BenRiach’s process. Differences in distillation and eclectic cask maturation lead to sweeter whiskies. These whiskies are a real treat – sweet, smoky, and unique. 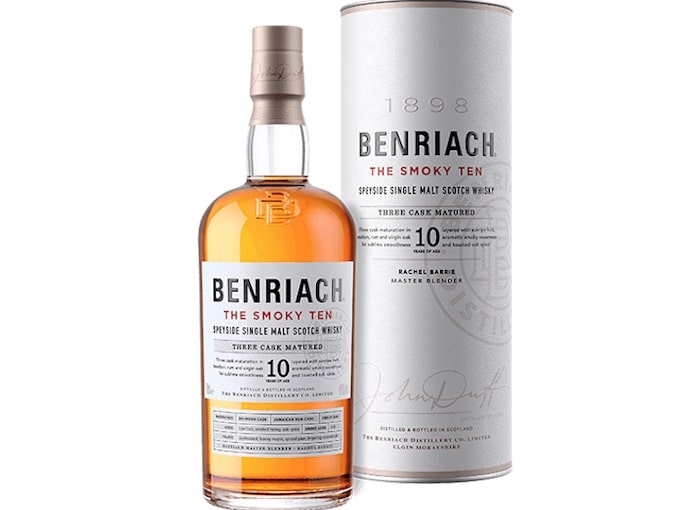 Appearance: Champagne with a touch of preachiness

Palate: Very fresh up front, with melon notes. This dries out as the smoke picks up then leads into crisp apples, before becoming baking spice on the back palate.

Appearance: Very similar to the Smokey Ten, but warmer

Nose: Orange marmalade right away, this bouquet is very deep. The jamminess drys into tobacco and a hint of vanilla.

Palate: The smoke hits a little less singularly, blending into the dry spiciness on the palate as well as the very long dark chocolate finish. I don’t pick up a lot of distincr notes, yet it remains immensely complex.

Final Thoughts: First off, The Smoky Twelve. My heart. I don’t typically tend toward peated whiskies, so I was completely taken aback when an annual line 12-year whisky came across like this. It’s delicate, complicated, and the smoke seems to tie the spirit together as opposed to being its own profile. I’m shocked.

The Smokey Ten was lovely too. I felt that it had a good, natural flow, and all of the flavors melded. I liked it even more with two drops of water, which brought out some undertones. In no way was it abrasive, however, and smoke lovers would do better to drink it straight.

17
Shares
4.7k
Views
Share on FacebookShare on TwitterGet Our Newsletter
Read More Whiskey News
Whiskey Review: Cascade Moon Edition No 1
Cheers to the Dads! Personalize a bottle of his favorite whiskey to create a modern gift for the modern man. Use code: FATHERSDAY20 for $20 off your next order of $100 or more at ReserveBar